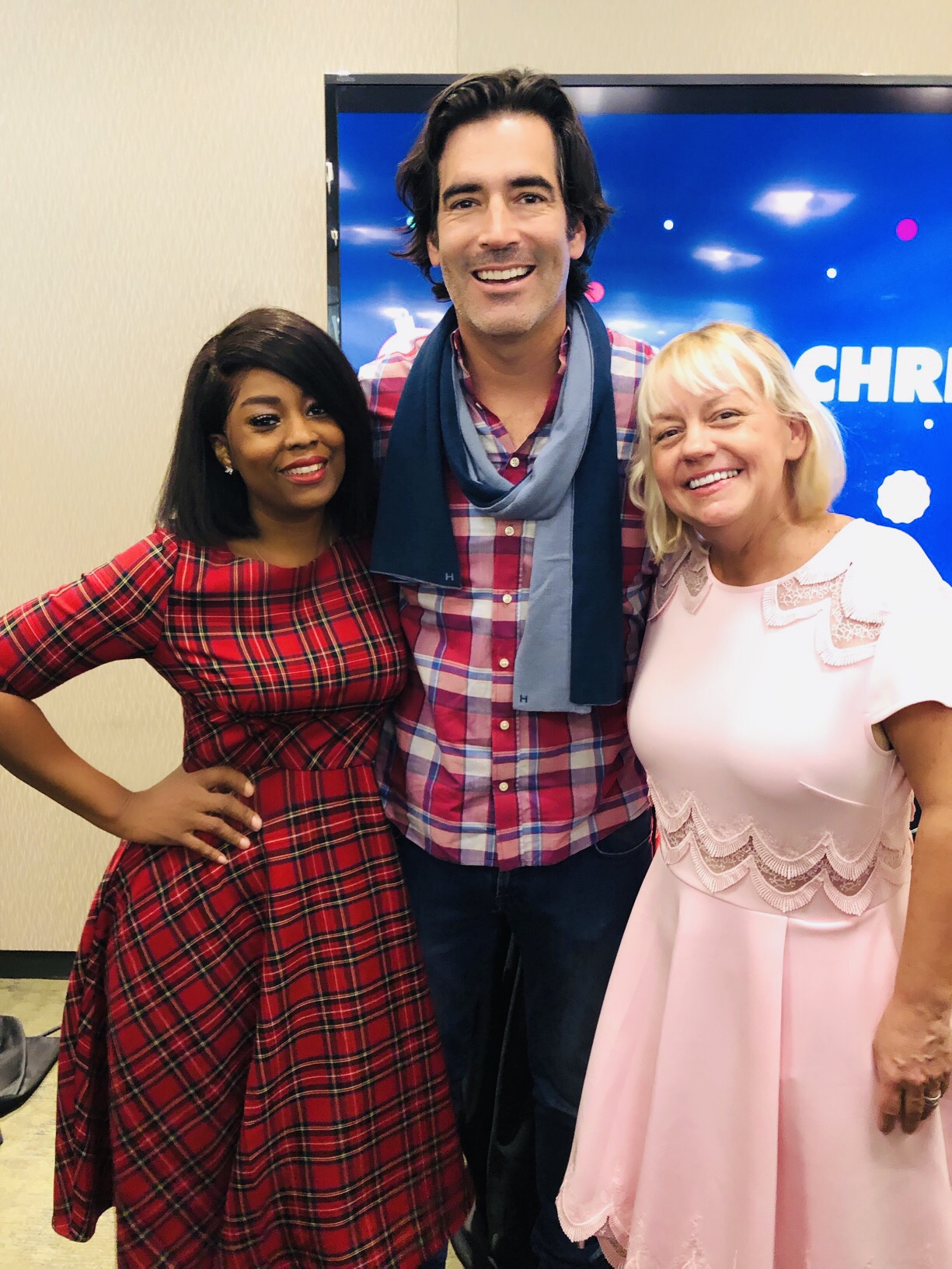 Hey guys hope you are staying warm out there! During my trip to Los Angeles we stopped by the ABC Tv lot where we checked out a few holiday tv shows for #25DaysofChristmas. After viewing the festive shows, we got a chance to sit down and chat with Tv Host and Judge Carter Oosterhouse from The Great Christmas Light Fight and also we talked to well-renowned pastry chef/Judge Sherry Yard from The Greatest American Baking Show: Holiday Edition.They shared with us information about their tv shows, family traditions during the holiday, funniest shows and so much more! Pop on in to see what they had to say and don’t forget to tune into these shows to get you in the festive mood, Enjoy! 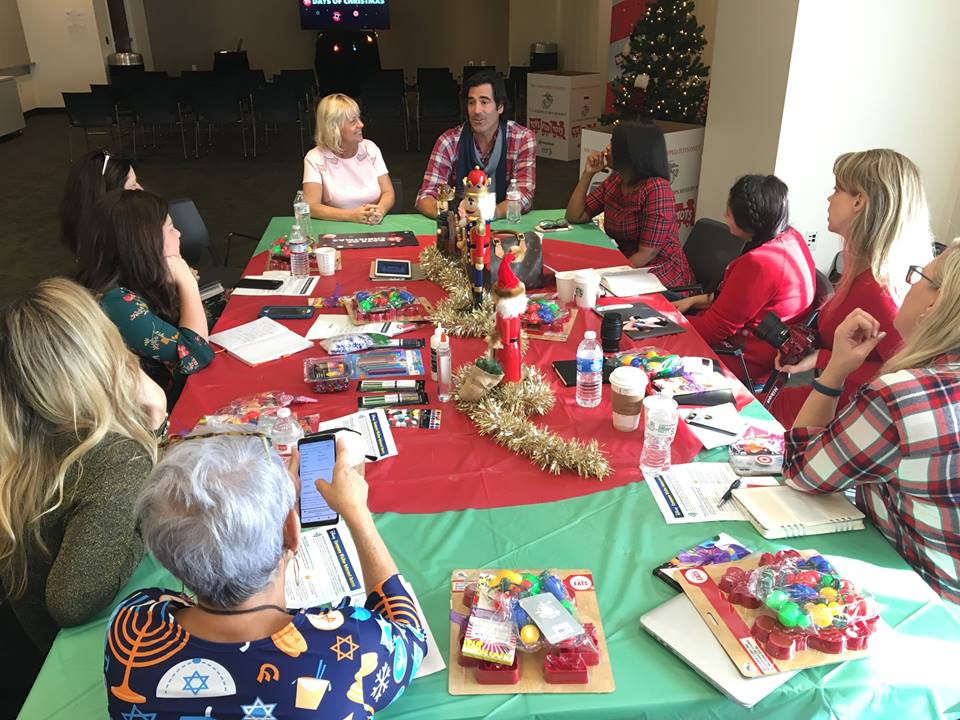 Tell us about your holiday special?

Carter: So she was just asking about the holiday special. So, my show’s the Great Christmas Light Fight, which just premiered last Monday, and so there is myself and another host, which is Taniya — so, what happens is, she’s in the second hour, I’m in the first hour. So we switch back and forth. We never see each other.

We’re totally different. She showcases four places. I showcase four places. And we go from the East Coast to the West Coast. The first episode just aired which is our sixth season, and which is crazy. Six seasons, on this show. Which, we didn’t know it would do, you know. It’s just, like, a fun holiday show that has just, you know, everybody can kind of get behind.

You know, that holiday cheer, and they wear sweaters like this, and you know, and it’s fun, and it’s just that heartwarming, nostalgic moment that everybody has.

And the next episode that’s going to air on Monday night, this coming night, is going to be our heavyweight, which I kind of thought we were already were there and doing the heavyweight, because, it’s, you know, it’s the Great Christmas Light Fight. But this one is, where we have places that are just bigger, a lot more lights.

What is the craziest episode you have filmed?

Carter: See, that’s just kind of the fun thing about it, when you notice something that is just completely off the wall, and different, that’s what I love seeing, personally. I love seeing stuff that is creative, that you have never seen before.

You know. Whether it’s something decorated or designed. Whether it’s a dinosaur that literally walks around the entire space. We’ve seen those. And a builder, and a designer, I love seeing stuff, where people…create something, and it may be this small, in a massive display, but yet it can walk over there and talk to you, and people have done that.

And you think, how long do you spend to create that? And how dedicated are you? But, very dedicated, but what I love about it, which is kind of what brings us all together at Christmas, is that it creates those Christmas memories. And so that Christmas memory, that was created in that city for that town and that community is going to be stuff that those people remember for the rest of their lives, and me, you know. And that’s the kind of real unique joy and fun part about it.

What is your favorite tradition at home?

Carter: So I have a two-year old now, almost two. Thank you. And she’s amazing. And so, for us, I do a lot of DIY stuff, ’cause the shows that I work on, we do a lot of DIY moments, and right now we’re doing the pinecones, where we’re dipping in paint. Where we string them together to use them as garland. I always think that’s kind of a fun one to do, because it’s easy and if you can it goes a long way. And having a pine tree right outside, it makes it yeah, I have a pine tree right outside.

So, it’s very easy to collect the pine cones. And you can send Flora, that’s my daughter, off to do it. But,  her name is Flora, yeah. Thank you. Little Floracita. And she’s super fun right now, and I was also just saying, which I will say again, we were watching the show. The DVR recorded the first show on Monday night, and I was actually shooting so I didn’t get to see it. But I didn’t realize it recorded. So I was like, “Oh. Flora. Daddy’s on TV. You get to watch Daddy on TV. You have never seen Daddy on TV,” and she looks and she goes, “Dada.” She sees me. And she recognized me on TV, and it was such a great moment, and then she goes, “No, Dada – Daniel Tiger.” 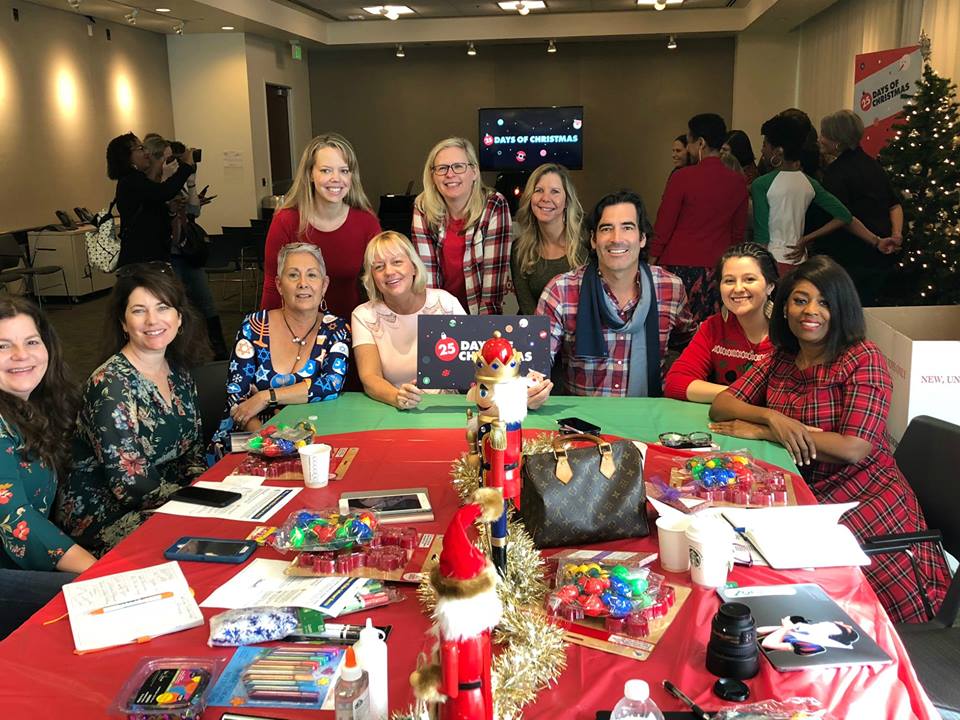 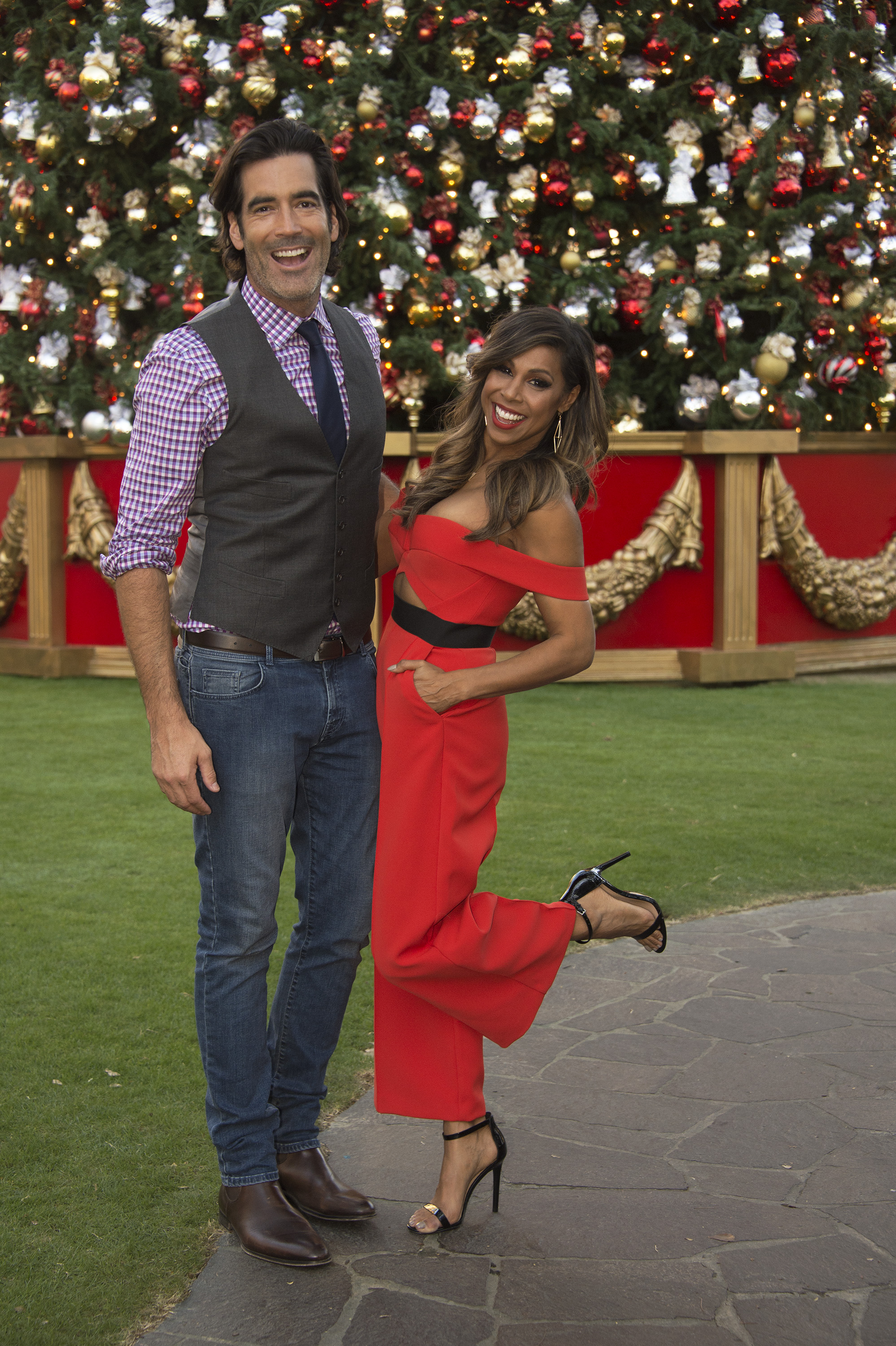 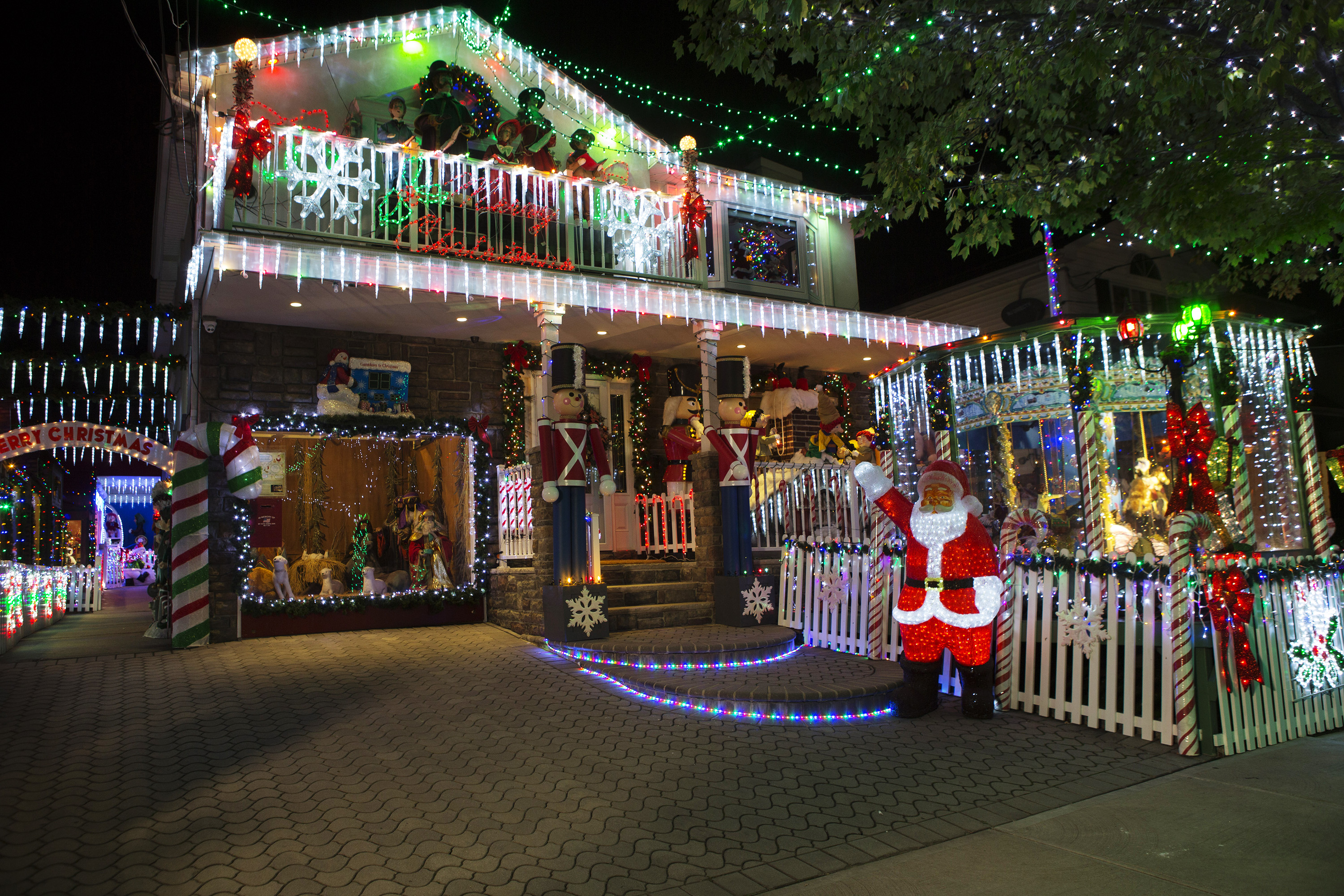 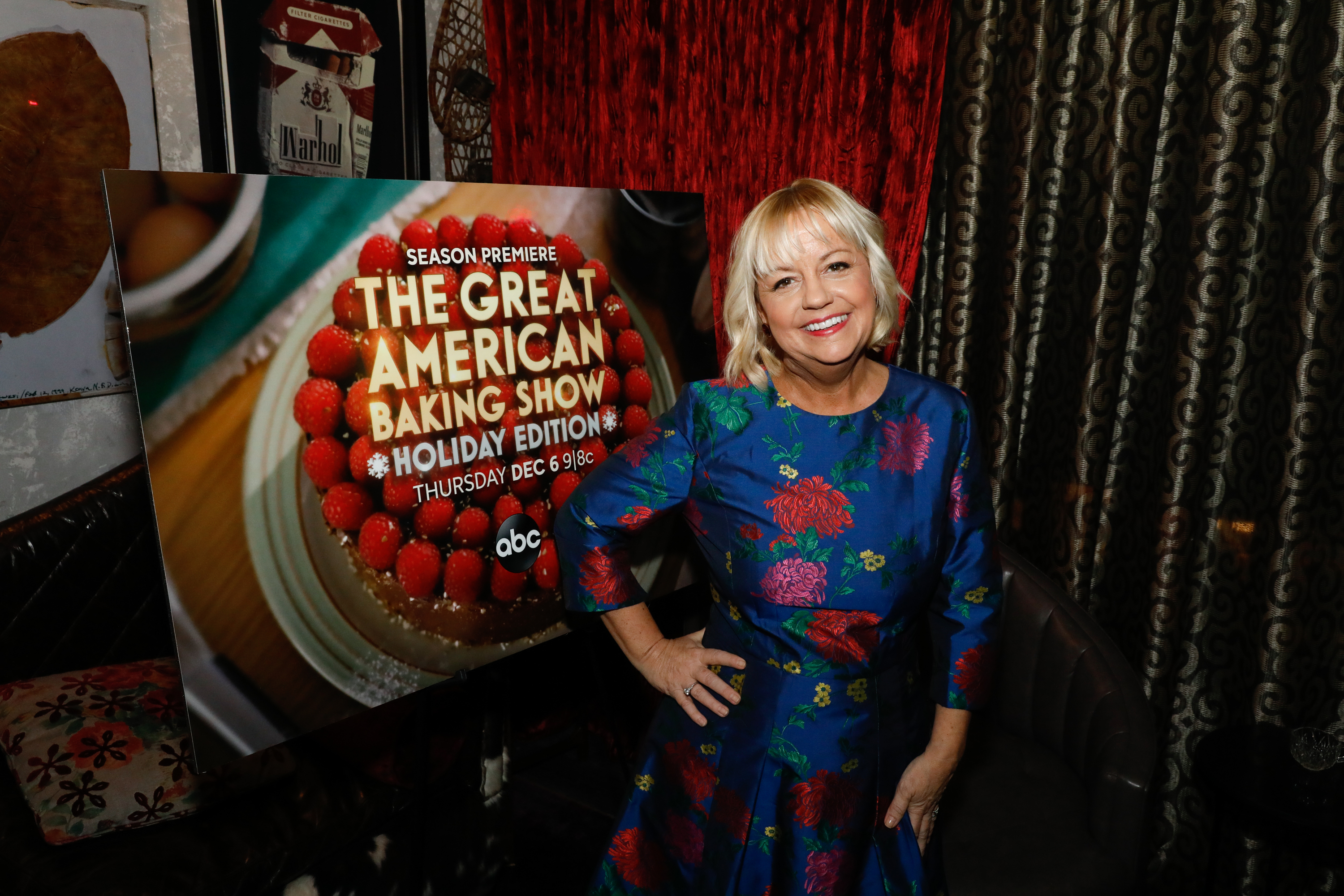 Tell us about your show?

Sure. My show is the Great American Baking Show. [OVERLAP]. And this is my first year. I was up for it the first time they were going to put the show together, and things didn’t work out. And then I get a phone call, earlier in the beginning of the summer, and they said, “We want you on,” just out of nowhere. And so, it was very surreal for me, because that meant moving to London for a month, and I know, it was tough, and eating pastries, and being under the tent.

So, as a baker and someone who wants to promote baking and make everyone bake, it was just hallowed ground for me to go there. The show is the number one show in Britain. Isn’t that amazing? Number one, over their own version of American Idol, or whatever they have. It’s the number one show. And so for me to even be a part of that family, just check it off my list. And Paul Hollywood, who is the original judge, is my co-judge, and he is crackerjack.

As handsome as he is — can I say that? He is the same way as a baker. He knows his stuff. He cares about all of the people that are there. He gets to be a little dastardly, and I get to be a little on the sweet side and call him out on some things, and he calls me out on things, and it’s just been phenomenal. And then of course, like, our hosts, are Spice Adams, NFL football player, and Emma Bunton, a princess-angel, that’s all I can say, she sings like an angel.

The Spice Girl. Emma Bunton. And we’re like sisters now, because I would ask her to sing, and she could sing anything from A Christmas Carol to Happy Birthday, and she’s an incredible talent and so much fun. And the contestants are from all over the United States. They don’t let them fool you, they are home bakers, but they could kick the butt of any professional pastry chef out there. They are serious bakers.

What is the favorite creation that you had to come up with for the show?

Okay. Here’s my answer. And it’s a really true answer. There wasn’t any one thing, because I loved everything, okay? The question over there was how do you prepare for the judging? And the answer was, lost ten pounds first. And the reason is, because I’m not just a biter. I’m not a biter judge. I’m an eater judge. So if there are two things there, I’m going to eat both of them. If there’s ten contestants, that means I eat 40 of something.

So, and there was just — they are all so different. How do you compare a cake to a cream puff?

For the holidays, what do you prepare for your family? For dessert?

Okay. I make everything from something called Croquembouches, do you know Croquembouches? So they’re cream puffs and they are dipped in caramel, and they go all of the way up there, and then I put tunnels in there. It means a crackle into your mouth, or a bite. And then you stack it up like this. It’s the most spectacular…and then you spin sugar. You take sugar in the pot, that’s one of the things that you — I’ll brag a little bit. Look on the internet on the Food Network for “Sherry Yard spinning sugar.”

I can spin it by hand. I spin sugar in mounds, and I put it all over the top, and it’s like, the most incredible centerpiece. Mm-hmm, yeah. I did it on the Food Network. Alton Brown freakedo out and thought it was going to burn my hands. 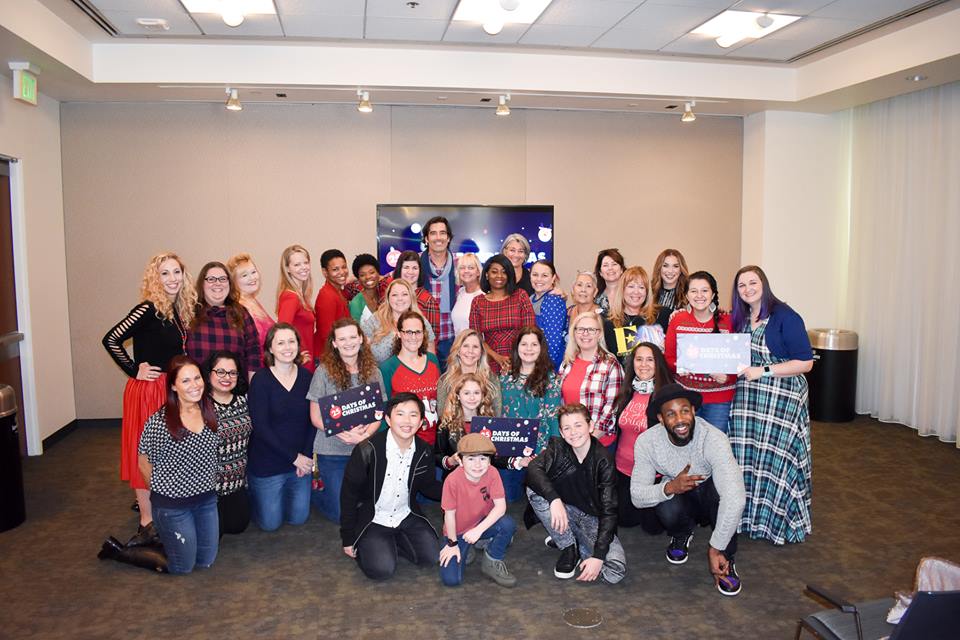