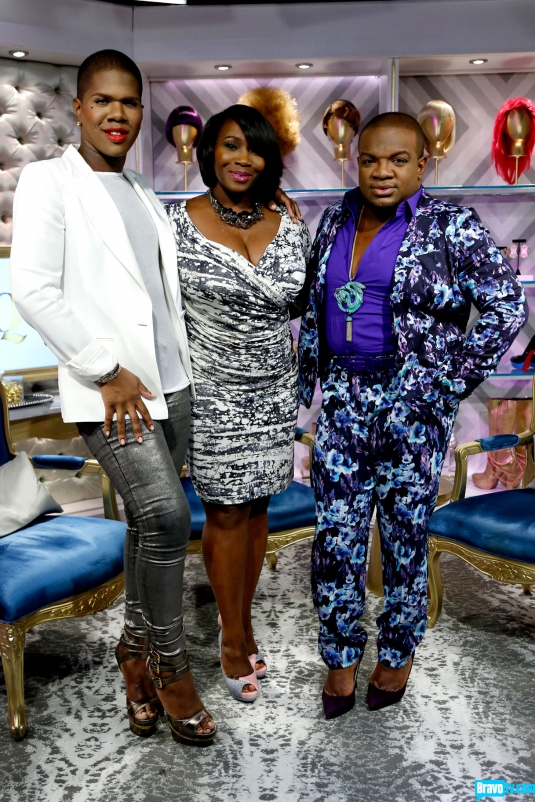 Were you guys surprised to find out that Bravo did not pick up a new season of Fashion Queens? I was not because actually I never understood the premise of the show, I also did NOT find any of the hosts fashionable at all. Its just my personal opinion and everyone has different taste. I’m entitled to my opinion before anyone comes for me lol.

I’m not in the limelight or on television like they are. They have stylists and a budget, I don’t have that advantage but boy if I did…lawd! That was always the running joke in the fashion world or from people that I know that work in the fashion business. They would always ask, how in the heck did they get a show talking about fashion? Don’t ask me but I’m pretty sure they had some great connects.

I think that the show was doomed from the beginning with the title of it. If it was called, “Gossip Queens” I think that may have worked better and not to include Bevy because she stood out like a sore thumb. It was as if they just threw her in. I think that Derek J and Ms.Lawrence could have held a show all their own. Like a remake of In Living Color‘s “Men on Films”.

For a show like Fashion Queens to work, they should have used a panel of experts like top fashion stylists, fashion bloggers and models in the African American community to voice their opinion and give commentary. I think that would have been fabulous!

So Tv Hosts Bevy Smith, Derek J and Ms.Lawrence will have to look into other ventures now but I guess when they were on the air they had a great time and did numerous amounts of hosting gigs, club appearances, hair shows, panels etc but it was not enough to gain and hold their fans attention. Bravo never did give a statement as to why the show was not renewed.

According to friends in the fashion industry that I know personally, they said that they never looked to any of the hosts on Fashion Queens for fashion advice or took them seriously on that show. When they did watch it(aired at 11pm) they did find it funny though.

I was chatting with a few friends over the weekend and they were talking about the state of reality shows. They seem to be here to stay. There is a lot of production going on here in Atlanta and the city is turning into “reality tv capital” lol but they went on to say that if its not over the top, Bravo really isn’t interested in anything positive or in good light, so sad. I think I did take a glimpse of Fashion Queens once but the language and gag this and slay that was just too much for me to bare and I tuned out after watching one episode during the first season.

Sidenote: I have a dear friend that works for a “very well known” fashion brand in NYC. She told me  that they reached out to Bevy’s people to put her in some of their fashions but allegedly she refused to wear anything of theirs because she wanted to be styled in more “high end brands” and not be associated with regular brands/plus size looks that everyone could buy and turned down the offer. Oh, ok girl!

I guess Bravo execs were trying to compete with legendary comedian and actress Joan Rivers over at E!’s Fashion Police but Fashion Queens looked quite bootleg compared to that show in my humble opinion, sigh! I couldn’t believe that it was actually on for 3 seasons though, who knew? Bevy recently said, “It really is ok, we started with three episodes order, and it turned into three seasons. To start something with three episodes and it go for three season, how can we really complain. Like any good good runs, things come to an end, it’s a teachable moment for me and I hope to inspire people”. She has a valid point there and I’m sure it was an awesome experience! Are you guys sad to see this show go? Till next time! xoxo