Furious 7 hits theaters today and I had the pleasure of seeing it a few days ago. I’ve always been a huge fan of the Fast & Furious franchise and the latest movie left me in tears as I excited the movie theater. Last I saw in Fast & Furious 6 was when Deckard Shaw(Jason Statham) the older brother of Owen Shaw, killed Han over in Japan, no!!!  That left a bad taste in Owen Shaw’s mouth and he was out for blood!

The gang in Dubai

Shaw came back to blow up any and everything in his path and that included Hobbs(Dwayne Johnson) and Dominic Toretta(Vin Diesel). You see lots of kick ass fight scenes, extravagant locations, explosions, car crashes and more! Some car chase scenes were even filmed here in Atlanta, ha!  If you love all that action stuff like me, you’re in for a treat! The storyline is really good and all the characters that we have grown to love were there including Ludacris, Tyrese, Michelle Rodriguez but we were missing the main ingredient Paul Walker…long sigh! His brothers Caleb & Cody filled in the best they could, but his presence was truly missed! Some new characters was added to the film too which were Kurt Russell who plays Mr. Nobody, Djimon Hounsou plays Jakande(scared the living daylights outta me) and eye candy Nathalie Emmaneul from HBO’s Game of Thrones. 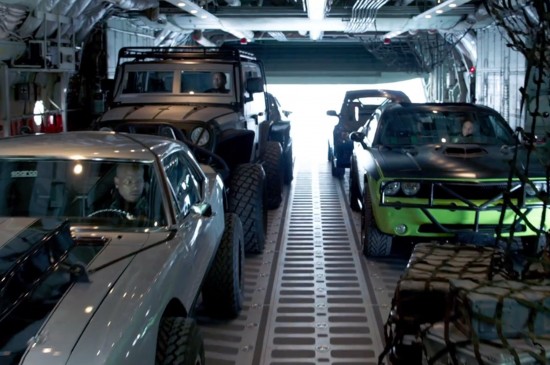 Its a good solid film with lots going on with phenomenal kick-butt action scenes and you will be along for the ride, just like me as I screamed at the movie screen roaring for my favorite characters. One scene that stood out the most for me was when they all had to travel to the peak of a mountain top to find a very particular device. The only way to enter this hidden location was by plane and they all had to parachute in with their cars, it was so cool to watch and Tyrese is hilarious!!! These moviemakers are so creative! The ending will leave you weeping and their was not a dry eye in the movie theater. I remember shooting Paul Walker when they were here a few years ago, his blue eyes made me fall in love with him and he looked right in my camera and smile, God Bless you Paul and may you R.I.P

I give this movie an A+ and check it out with your WHOLE family for Easter weekend, its really a great film to see! xoxo