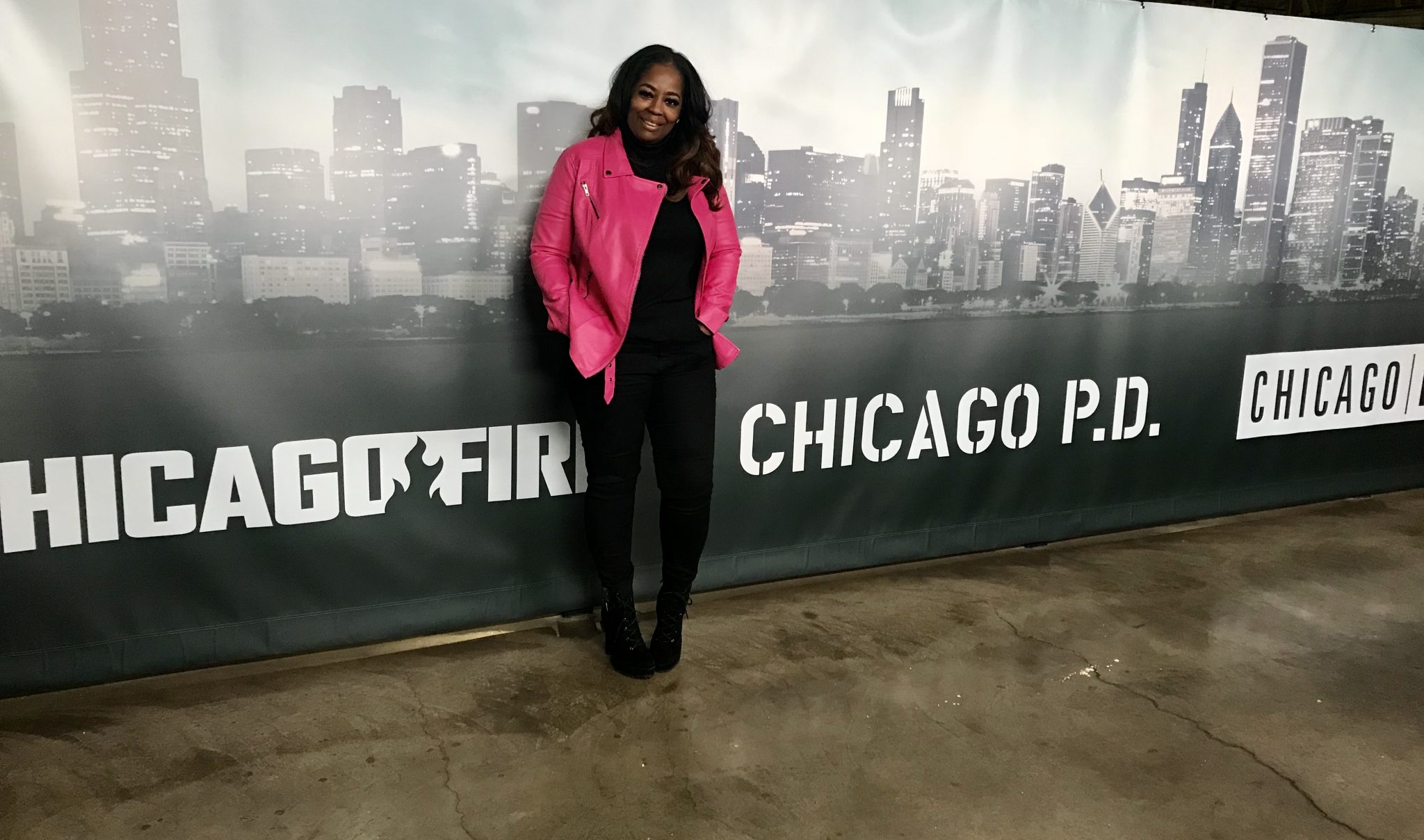 NBC Universal Annual “One Chicago Day” took place at Lagunitas Brewing Company in Chicago, IL on October 30th. I was there in attendance and had a great time doing round table discussions with so many of the actors from Chicago Med, Chicago P.D. and Chicago Fire! It was very random and we all just shot out questions that we wanted to know and they didn’t mind sharing stories and more with us.

Everyone was in good spirits and I got to ask them about their roles, favorite scenes on the show, beauty questions and more!  Check out what some of you favorite actors from these various tv shows had to say inside. I found their answers quiet interesting. Have a great day everyone! 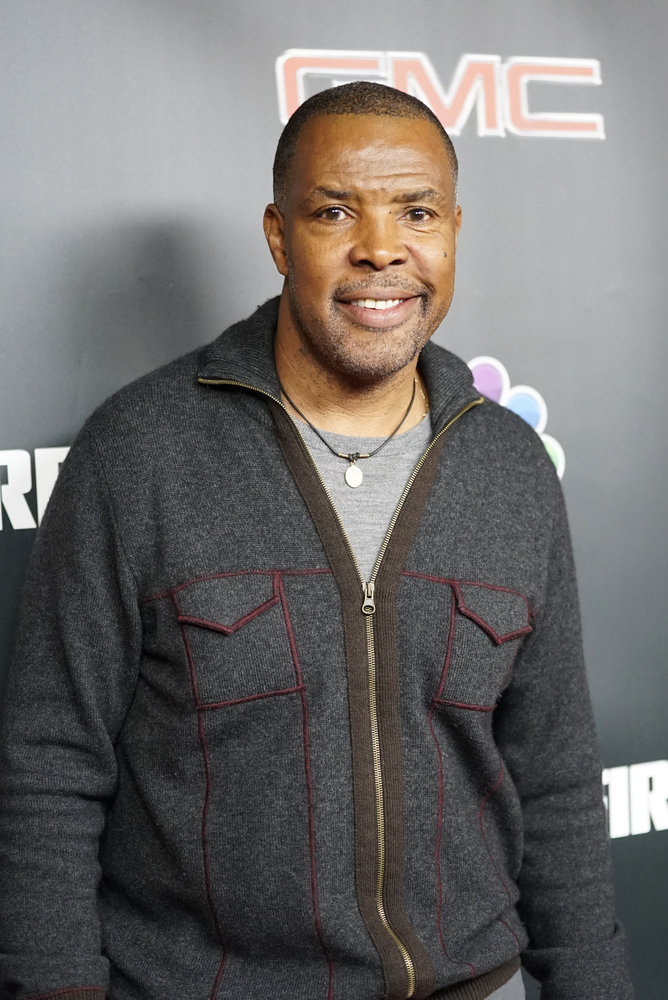 Eriq La Salle, is one of the Executive Producers of “Chicago P.D” You guys may remember his role in the hit 1988 movie “Coming To America” as Darryl Jenks with the Jheri Curl lol. He told me that he has always been a writer and producer. I asked him did he have any plans on doing the remake of Coming to America but he said he hasn’t heard anything as of yet but would consider. 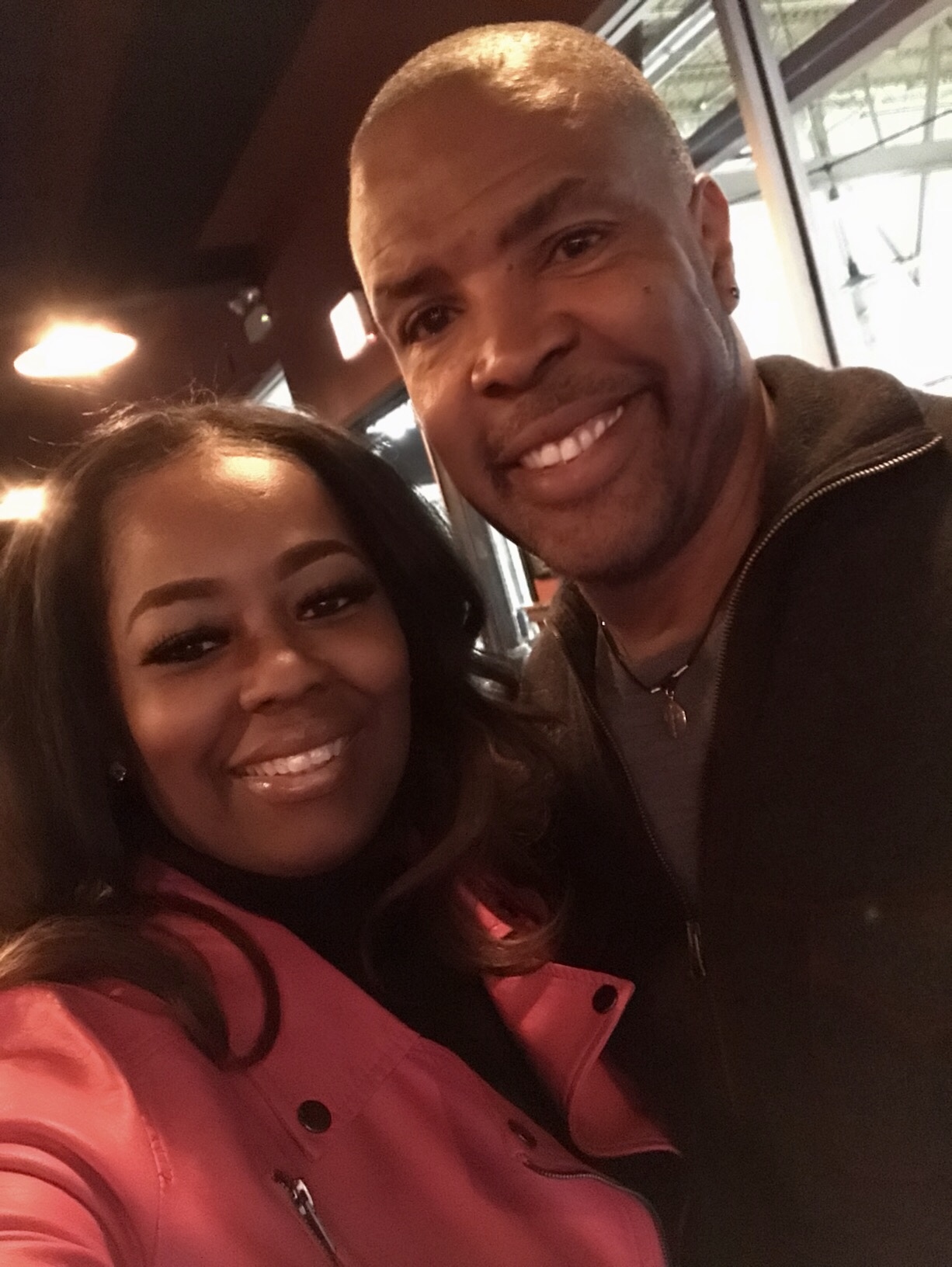 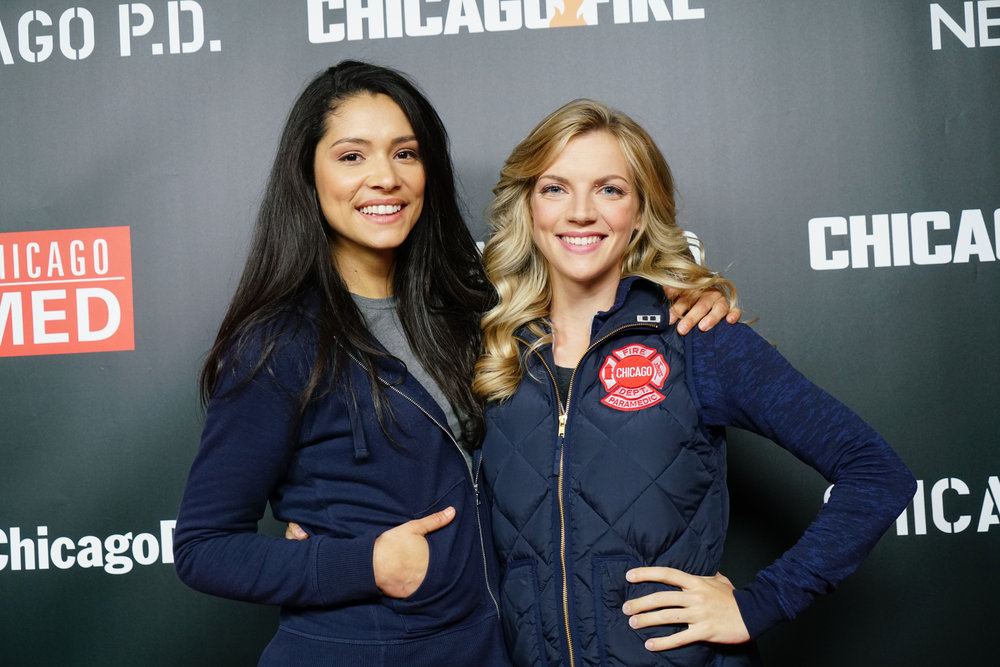 Miranda Rae Mayo, Kara Killmer, “Chicago Fire” were fabulous to chat with! Kara said she used to work in the mall and would often do her own hair! She would cut it and style it up and was pretty good at it too. She loves using Big Sexy & Keratin hair products on set. Miranda likes to use Moroccan Oil on her hair. When she has time, she stops by the Dry Bar for blow outs in Chicago. 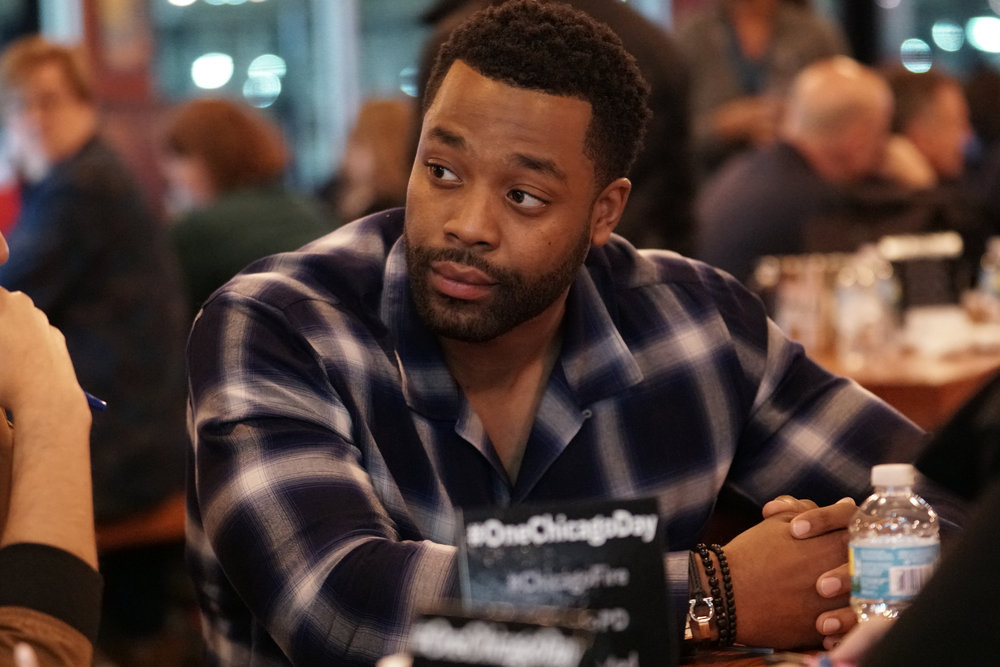 LaRoyce Hawkins plays Officer Kevin Atwater on “Chicago P.D.“. I had a ball talking with him and he shared with us that his mom owns a hair salon in Chicago. When he was younger, she would often send him to pick up hair extensions for her from the beauty supply store. He said, “Oh, I can tell what color hair a girl is rocking at anytime, that’s 1b, (off black)”. LaRoyce is so funny but he is also a stand-up comedian! He also said he loves when girls wear short hairdos, that’s very sexy to him and it shows confidence. 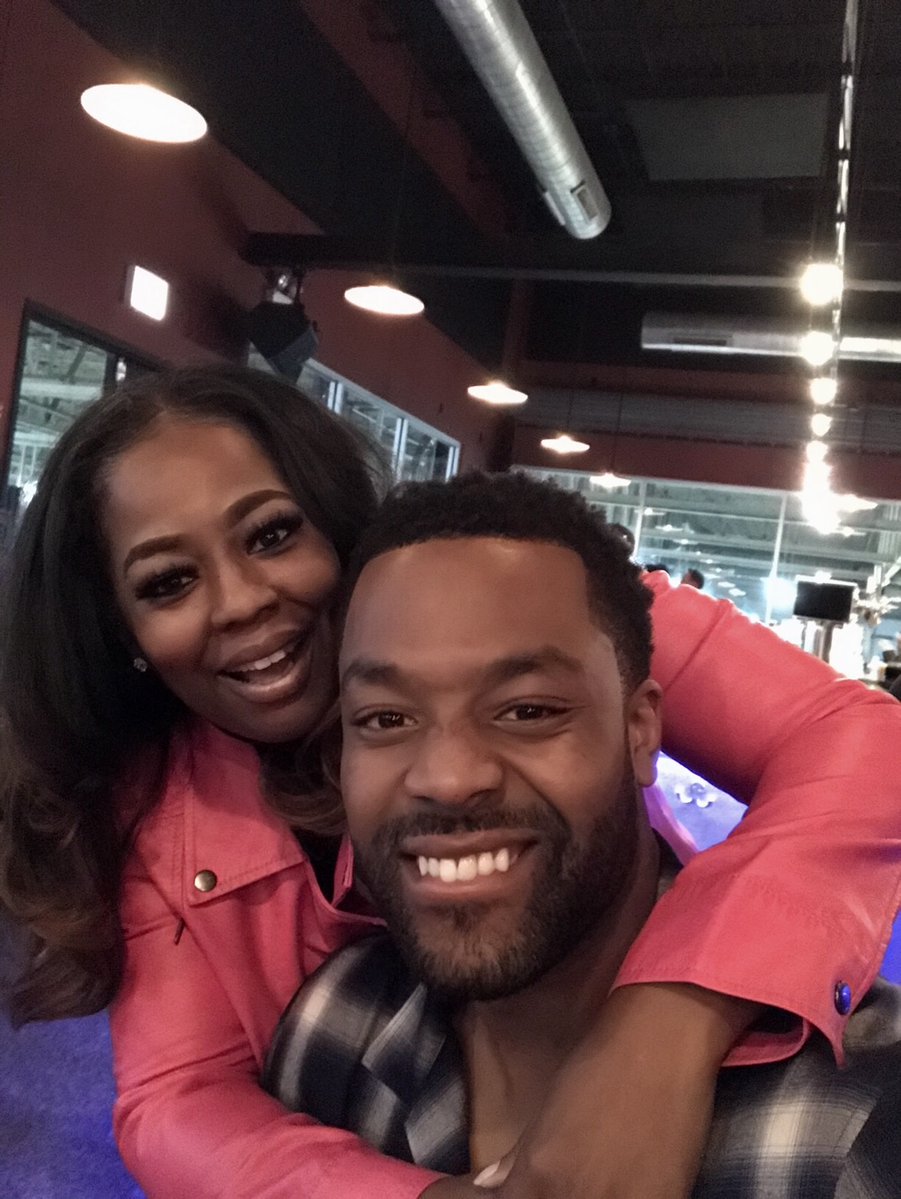 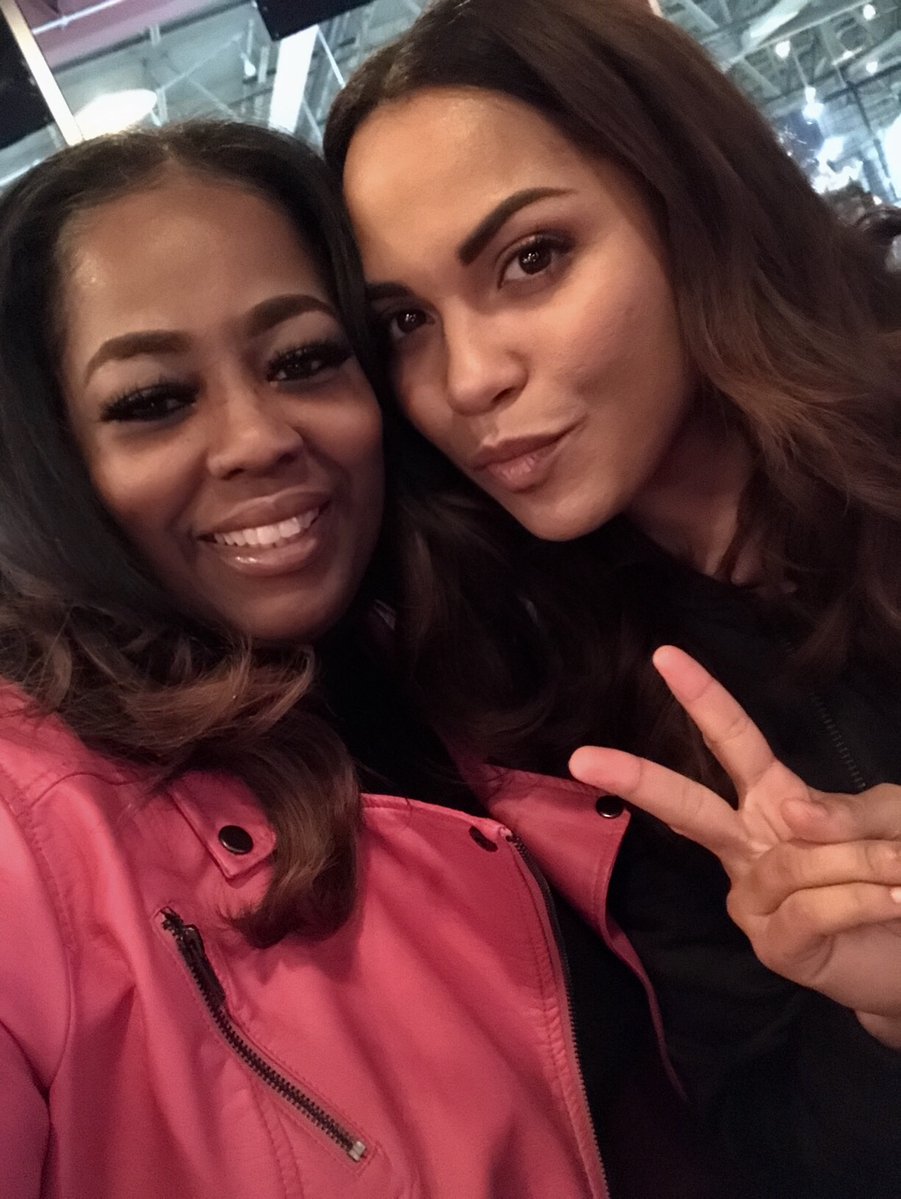 Monica Raymund who plays Gabriela Dawson from ‘Chicago Fire’ shared with me that she loves to use any hair products that are olive oil based. It keeps her hair healthy and shiny. She normally has very curly hair and on the show she wears clip-ins and hair extensions. 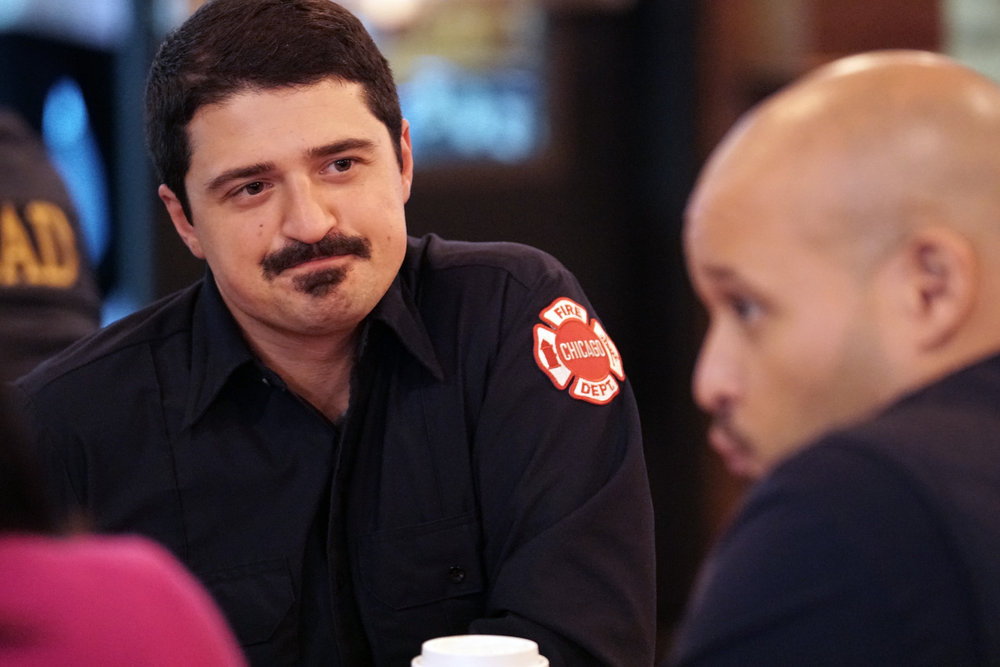 Yuri Sardarov who plays Brian Otis Zvonecek on “Chicago Fire” said when he is not on set, he loves to make recipes in a crockpot! He said he makes a mean chili! 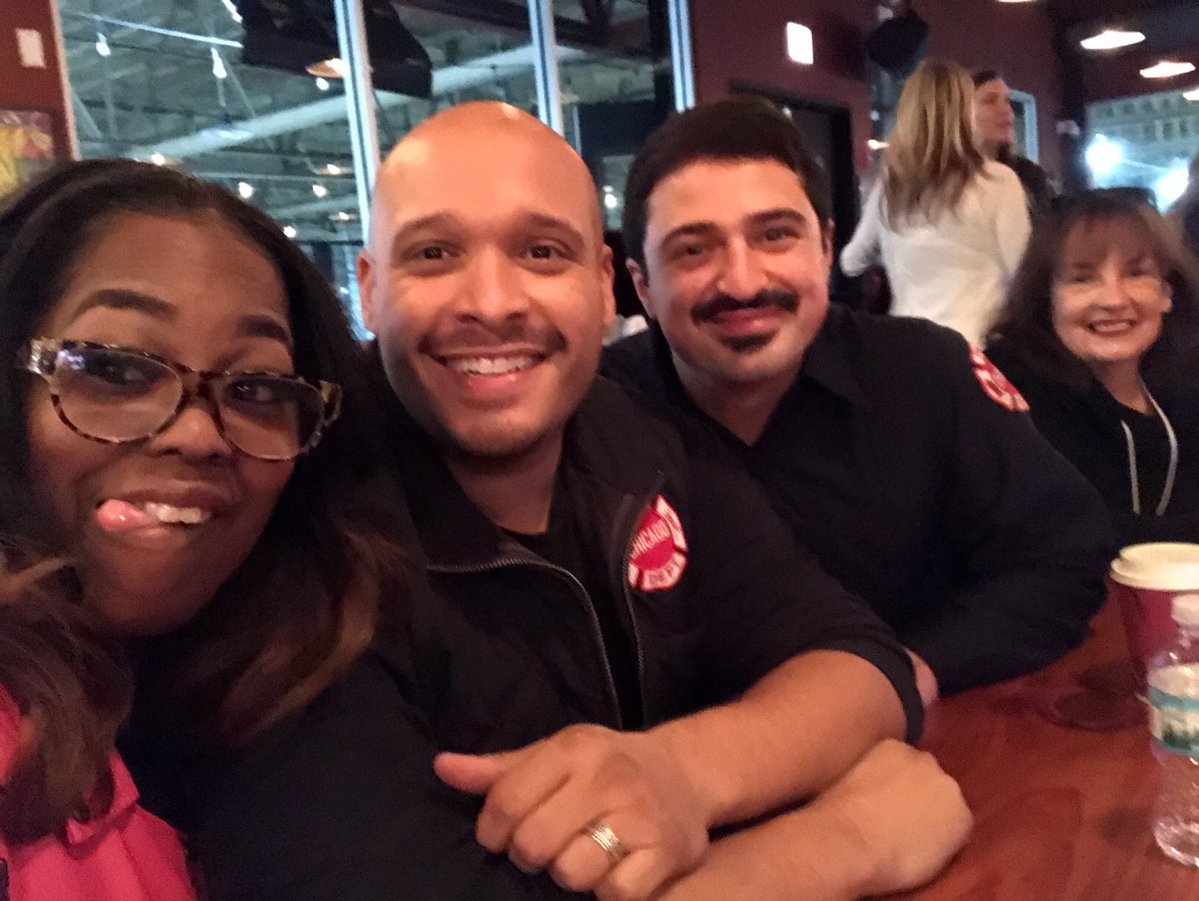 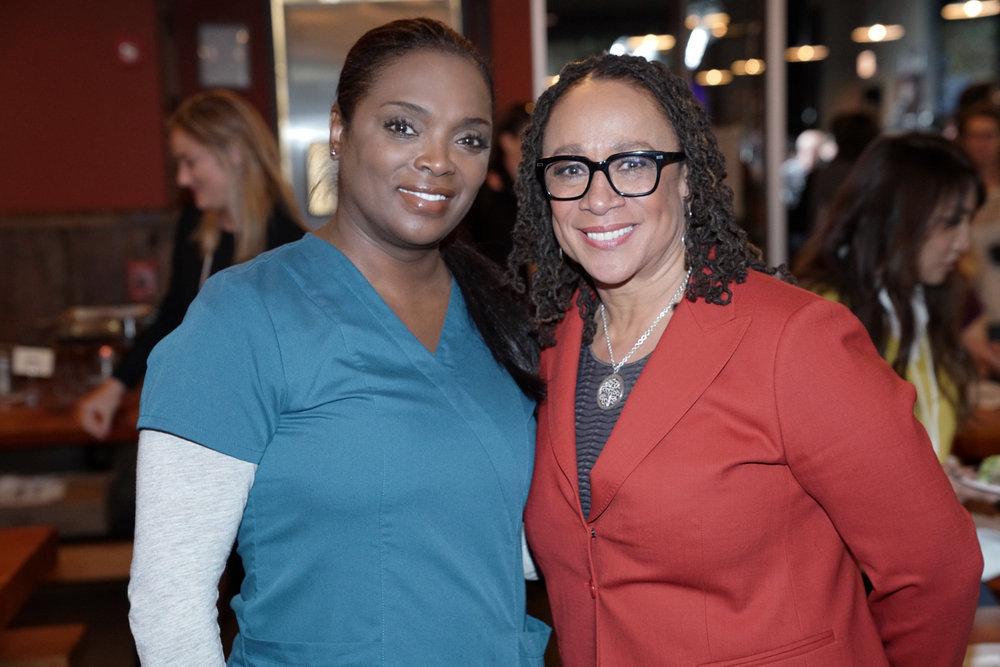 Marlyne Barrett, S. Epatha Merkerson “Chicago Med” talked to me about working with hairstylist Denise Baker on set. Epatha says that on the show she first started off wearing a wig but once the writers got to really know her, the wig came off for her character Sharon Goodwin.

Marlyne says her natural hair is really curly and she likes to use hair products from Mixed Chics and she also likes to change up her hair time to time and wear wigs, one of her favorites is named, “Gabrielle”. They both love to wear their natural hair as much as possible. 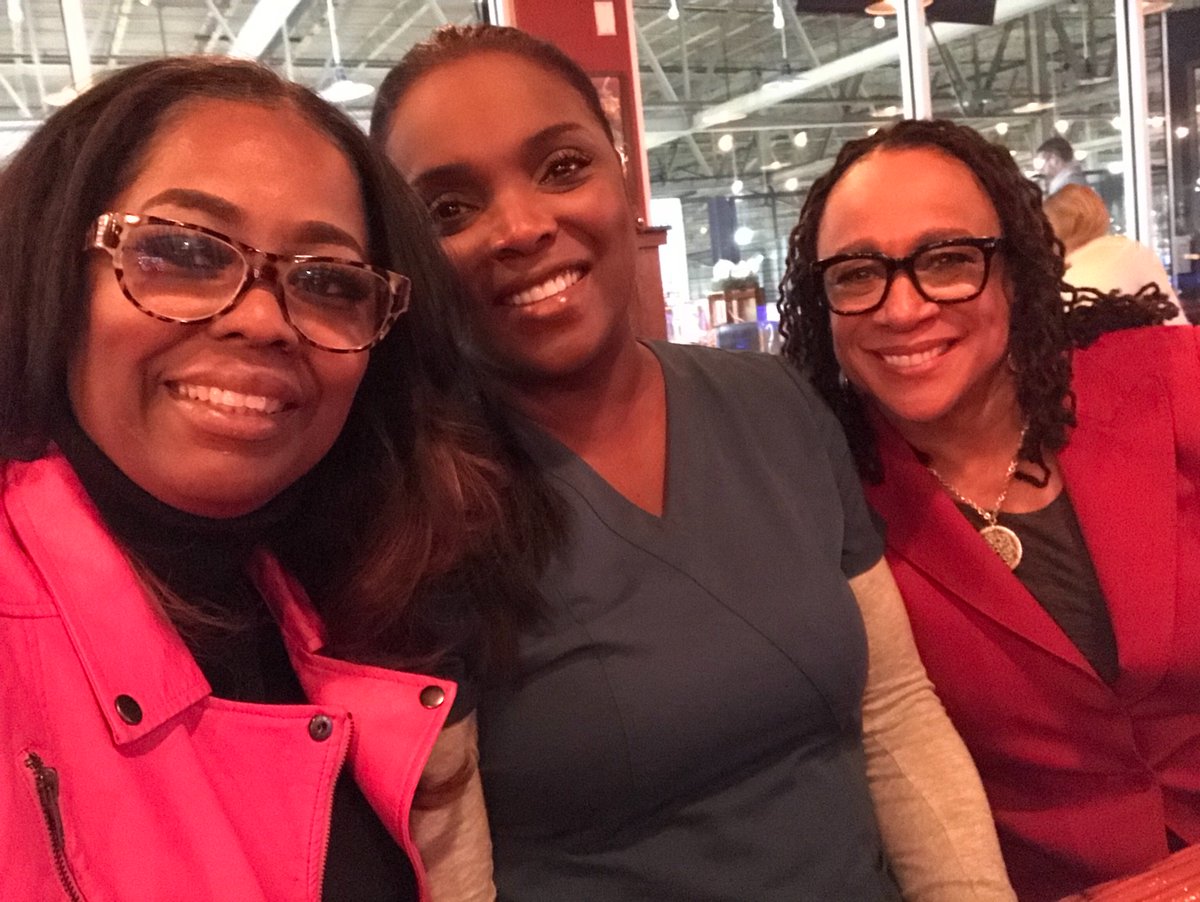 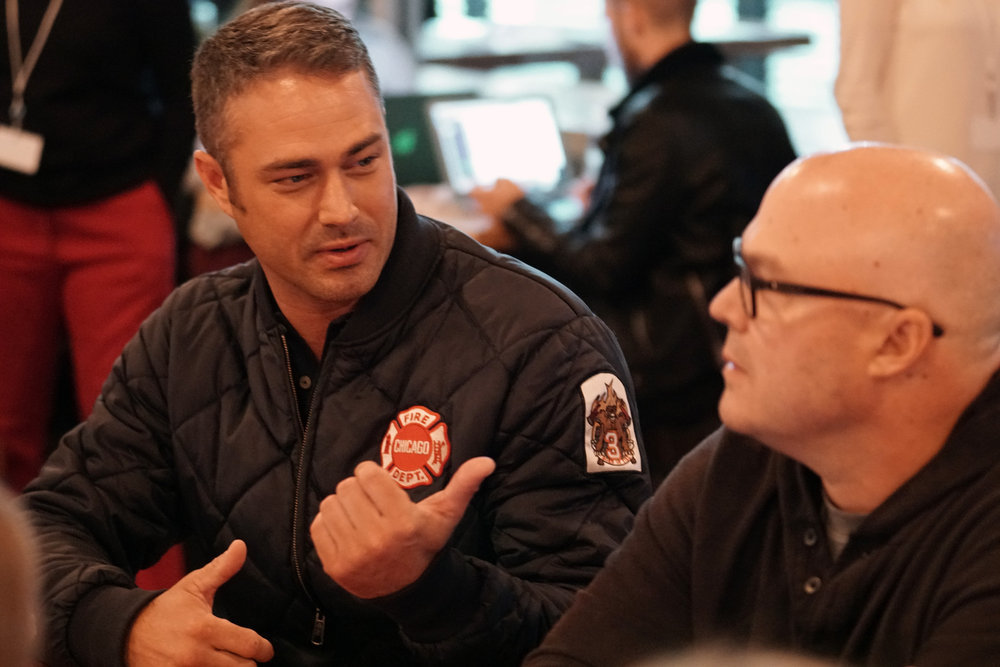 Taylor Kinney, “Chicago Fire” and Derek Haas. Taylor said he likes to keep his hair pretty simple. “I get a cut every few weeks, I keep it simple but last season I showed up with a shaved head because I got sick of the longer hair. I do use Moroccan Oil, I like that. I don’t mind when ladies have different hairstyles, they don’t have to have hair at all”.

A memorable scene this season for Taylor was about a fallen soldier. They were in their dress blues and a kid got hurt and lost his life. You see a grieving mother, it was very moving and powerful. He was very moved. “When you’re in the circus, you see things differently and that episode I could watch years from now”. 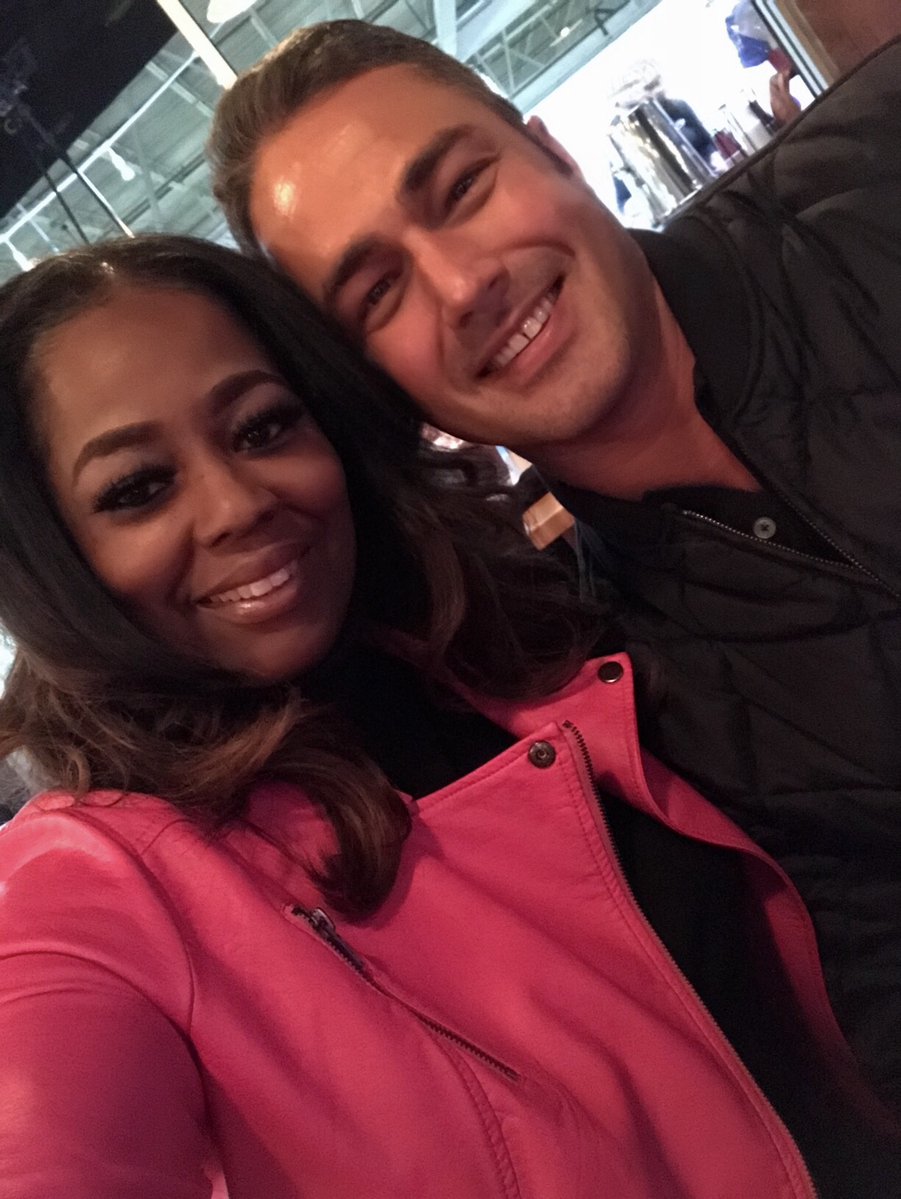 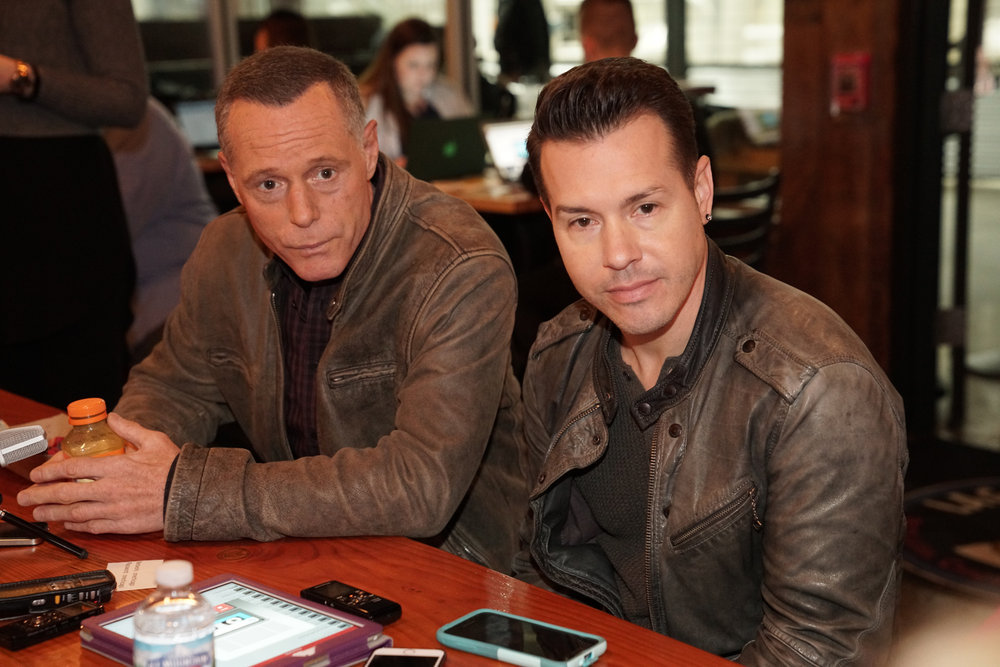 Jason Beghe and Jon Seda “Chicago P.D.” Hank Voight is the role that Jason plays. He said that he is trying to do the right thing this season. “He does do some bad things but he is trying to work on it. We try to show you why people do what they do, we want to all have peace at the end of the day though”. 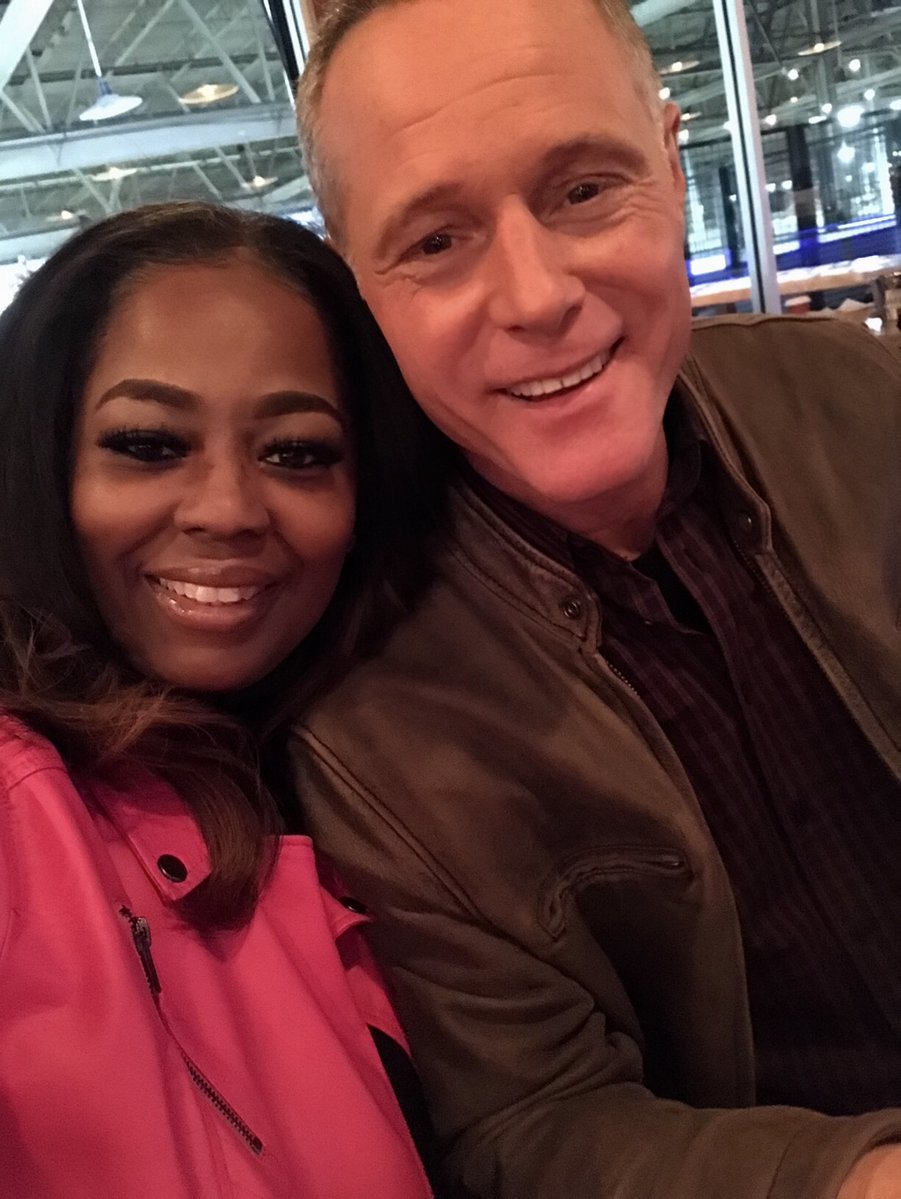 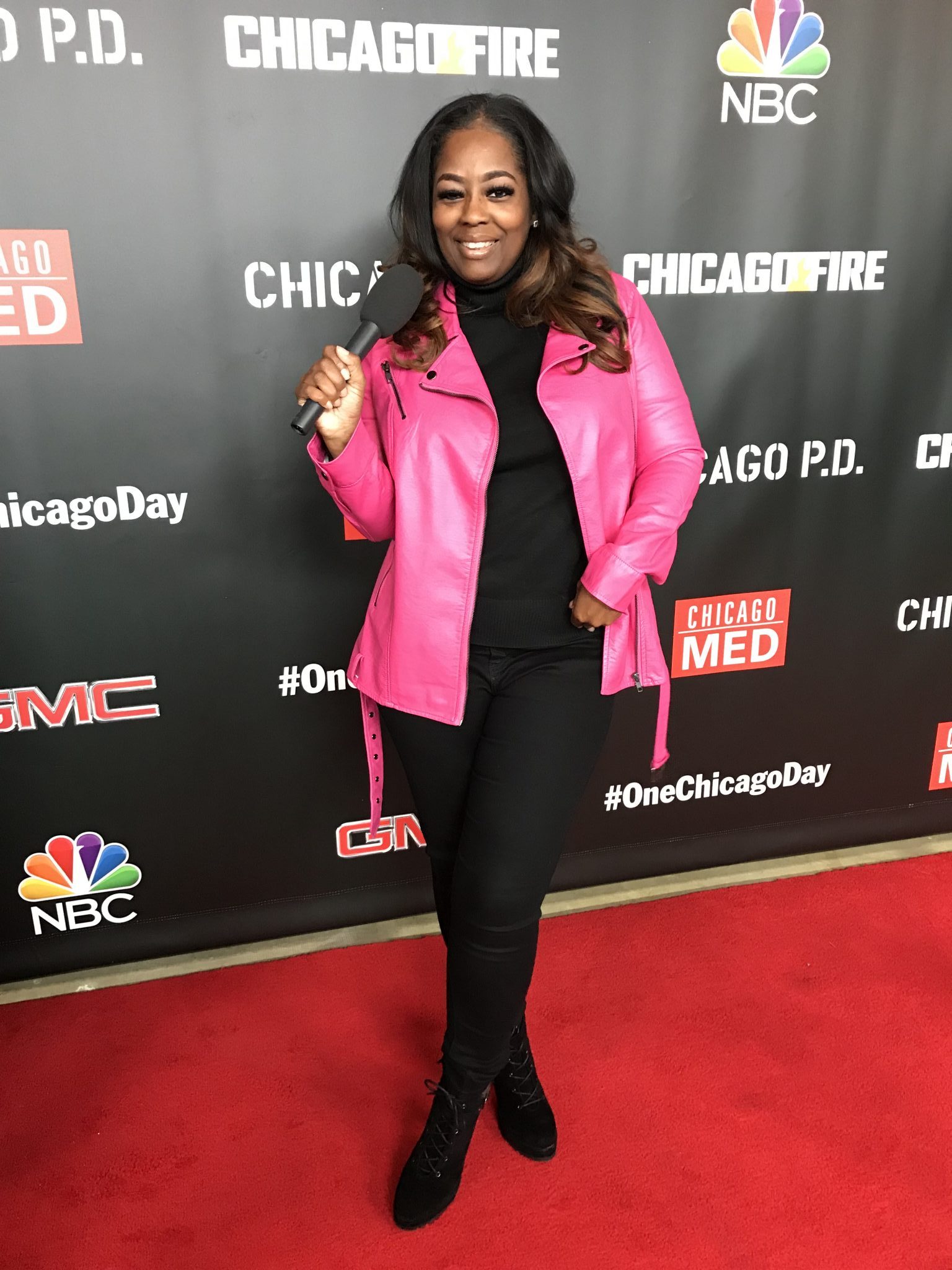 2 thoughts on “Random Questions And Answers From The Cast Of Chicago Med, Chicago P.D. & Chicago Fire”