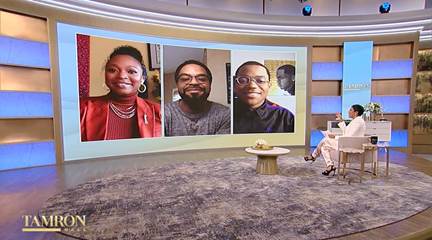 On the Wednesday, December 9 edition of ‘Tamron Hall,’ Method Man, Naturi Naughton and Michael Rainey, Jr. from “Power Book II: Ghost” discuss the hit STARZ show and tease surprise appearances from familiar faces later on in the season. Plus, Grammy-winning rapper and actor Method Man shares a story about his being fired from the iconic drama ‘Oz,’ talks about his not-so-smooth transition from rapper to actor, and discusses whose work inspired him as he tackled his current role.

“I’ll just say that there will be some characters that come from the past coming into our present, girl, I’m not telling you! I will say this, there are going to be some surprise characters that you’ve seen before coming back at the end of the season.”

Michael on whether he feels the pressure of being a series lead:

“Oh, definitely. Especially when we first started and I first got the news that I was going to be, you know, the lead role in this, I was kind of nervous because it was just a big jump from going from recurring to season regular, then to going, being number one on the call sheet, it’s like, it’s huge. So I was definitely feeling the pressure, you know, but my crew and my cast, they made it easy for me to adjust and made it easy for me to be comfortable, so shout out to them.”

Method Man on why he was fired from his role on “Oz”:

“I tried to play the rockstar role, I was basically still in the music business so I tried to play the rock star role and sleep in after the show the night before and tried to call in sick and I basically was told, ‘Okay, well, you stay home and we don’t need you anymore’ kind of thing. So now I’m up and I’m calling everyone I can call, from my manager, to my agent and they’re calling production and then an assistant finally got on the phone and said, ‘Tom would like you to come in tomorrow. We don’t know how it’s going to go, but make sure you show up on time.’ And I made sure I showed up on time. My character was killed off later on that week. So yeah, that was a valuable lesson to learn right there, absolutely.”

Method Man on the inspiration for his character Davis Maclean:

“Well, I’m glad you said Johnnie Cochran because he was definitely one of the inspirations but I believe Denzel [Washington] in ‘Philadelphia’ helped a lot. When I took my acting class, me and my scene partner had to do a scene from ‘Philadelphia,’ of course he played the Tom Hanks part, I played the Denzel part – it kind of prepared me for where we’re at right now and Davis Maclean is polarizing at best, some people love him and some people hate him. I think the people that love him get what he’s trying to do and the ones that hate him, so be it.”

Method Man on if he identifies more as a rapper or an actor: