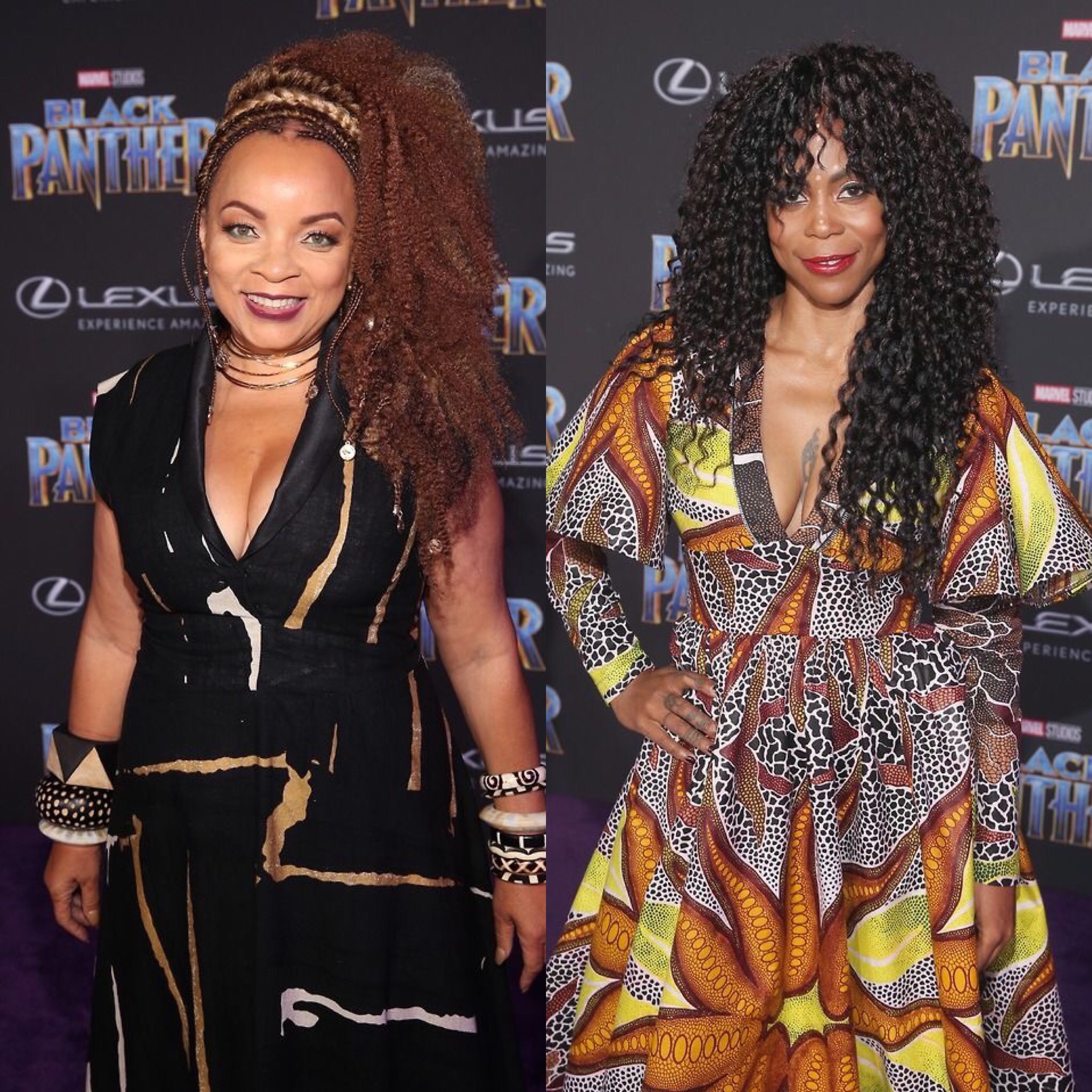 Now you guys know that I really LOVE fashion, so it was so much fun getting to sit down and chat with Costume Designer Ruth E. Carter and Production Designer Hannah Beachler! They are so talented and walked us through the process of styling the cast, getting inspiration for the set and so much more! I thought in the movie Black Panther, that they brought so much richness and culture to the film, it was mind blowing! Step inside to see what they had to say about working on the film, styling Black Panther Chadwick Boseman and so much more! Don’t forget that Black Panther is in theaters now, it’s so worth seeing! 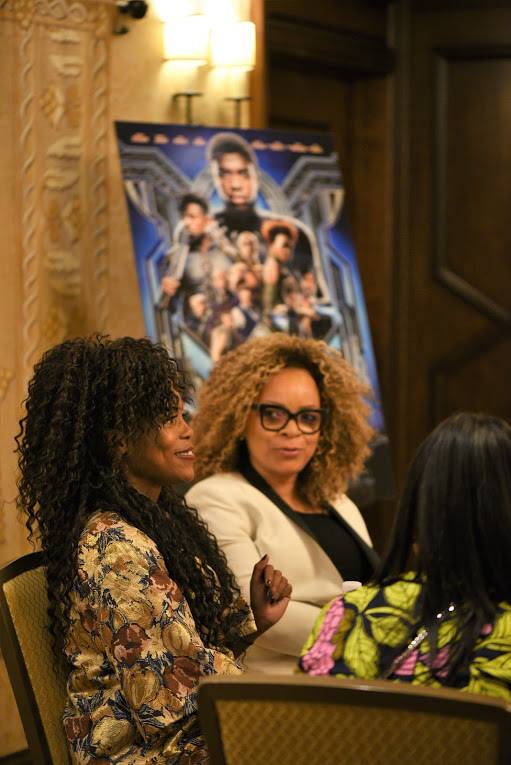 Hannah: Production designer’s usually on films first after the director, hired by the director and the producers. And, you know, Ryan he kinda just like texted me and he was like, yeah, I’m to come in. You know, of course I had seen that it was announced that he was doing it. And come in and do this. So, you know, process was and he was really good about guiding me is starting at the macro. And it was really about like where is Wakanda in on the continent of Africa, you know, because that’s going to then determine everything that goes around.

And we kind of set it in sort of eastern sub-Saharan Africa. So, basically you can kind of place it on the border of DRC like right above Burundi and Rwanda. So there was like Kibuye was there, Kenya, Uganda, above Uganda, Sudan. So, that’s sort of where we are. And we also took from Omo Valley tribes in Ethiopia. So you go down a little bit, but we wanted to keep it sub-Saharan. We wanted to keep it very specific. We also — I reached into Western Nigeria, so the [SOUNDS LIKE: Efik] people and the Igbo people and their dealing, which you’ll see in the film a lot.

So, I did reach into Nigeria, Lagos. Did a lot of research in Nairobi and the bigger cities around — and Kenya and in South Africa, Joburg, Cape Town just for some of the architecture. And I looked at lotta older architecture. So, that’s really where my process started really big. Where are we? And then it was like what is the typography of the land? Next step is where does each tribe live on that land and why? And what is each tribe’s history. So then I go down and dot through each tribes’ history, and like this is why they live here. There is a story and a reason behind every single thing you see on that screen coming from me and coming from Ruth.

Every single tiny, little you know, I’m gettin’ a little bit of chills, because it really is. Like people it’s real. Like if I was go into a like, oh, my gosh. But it is so intentional. And really meaningful and thoughtful and everything that we did from the colors to the every little thing. Y k, I think we were in a couple like really personal spaces. And if you look around, you’re gonna see that character. And I think a lot of the process for me was taking big spaces and making them feel intimate.

Because that’s how the continent felt me to when I was there. When I was in South Africa, it’s like you look around and it’s these giant spaces, you know, even when you’re in the city, but there’s an intimacy and that comes from the culture and the people. So, that’s really where I started my whole thing and, you know, just kept, you know, working that research and development for that entire time that we were on there. And then when Ruth came on. 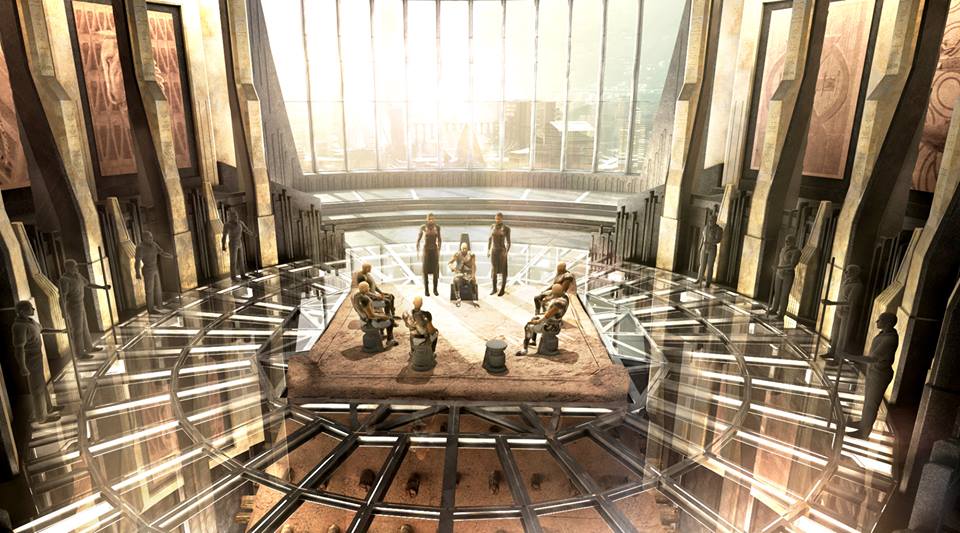 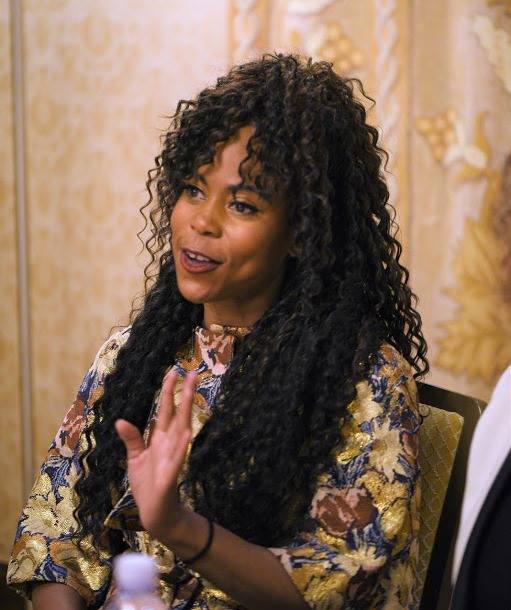 Ruth: Their train had already left the station by the time I got on. And so, it was really a matter of me starting out being a really good listener, really getting into what they had done, understanding what they had done. I was in Hannah’s office sitting across from her like let me see everything. And she said, hey, I’ve got this manual, I did. And it outlines everything. And I open it up and there’s like a map of Wakanda. It has a royal palace in the middle.

It has districts of — that are explained to the hilt. I was like how long did it take you to do this manual? Everything is written out. The Insivity language is in there and you know what it means. So, I bring the manual back to my team and I’m like, everybody, study this. Study this. Study this. I’m not — we are going to call these districts by the names that they made up in the office. I want boards. I want images.

We were looking at Afropunk. We’re looking at modern fashion. We’re moving everything forward. Everything has to be beautiful. We are not going to lie in any stereotypes at all. Whatsoever. And we wanna this present this world as a kingdom. What if Africa was not colonized?

This is what they would honor. And you see these images of the Himba girl with her leather drape on and her Himba paced all over her skin and her costume, and she’s pushing like a grocery cart in like a little convenience store. This is like a real photo that I saw.

And I thought, wow, this is like really cool how you can mix ancient indigenous tribal culture with modern. We don’t want to make a documentary. This is a futuristic place. This is a place that has the richest mineral known on earth, Vibranium. And, you know, they’re aware of it. They’re aware of their richness. So, let’s just move that forward. Looking at Afropunk, those images that you see on your phone, going through your Instagram, you see that beauty. And that’s some of the beauty that we wanted to infuse. And when you see the Dora Milaje, you see the Maasai tribe, you see the Himba.

The same drape that that girl in the grocery store pushing the cart had in front of her body with the little ringlets on the end of the leather, I put that on the back of the Dora Milaje so that when they walked in the room, Ryan Coogler said I wanna hear them.Can we put stuff on their ankles so that we hear them coming? And hearing them coming on set, I didn’t hear them coming in the — I mean arriving in the movie. But on set you can hear them.

And I felt like the color, we upped the ante on the color. If you go to Africa, you see people walking around with color. You see a brown guy with a yellow shirt and red pants. That’s just the norm. So, we’re not reinventing anything. We’re just bringing it out. And we’re just honoring it and holding it up. So, you know, that’s how we started.

Hannah: And let me tell you  I know Ruth can probably — this is really funny. When I first walked into your so she — I mean it — I went on forever. First of all, I’ve never see anything so big. It was the top of floor of an entire building, and I’m telling you it was ginormous. And I walked in and I — the whole time  I don’t even know. I was on another planet. 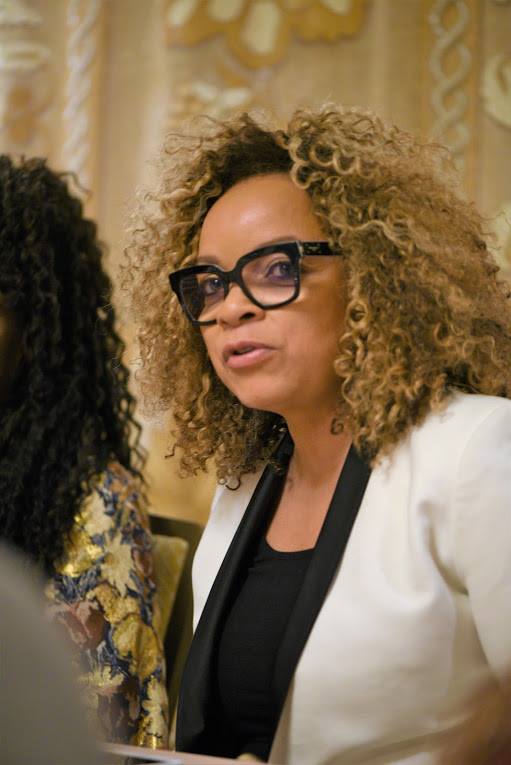 Styling of the cast?

Oh, my God. Yes, and so the Lesotho Village they’re one of the last to be colonized, and so they have held on to their traditions. And one of their traditions is this blanket that was given to them from England. So, you know, it is a kind of a part of the beginnings of their colonization. But there’s this beautiful blanket that the King of Lesotho embraced for his village and was like in the 1800s. So, this blanket represents the Queen. It offer– — they have these different designs that they do, and they’re magnificent. They’re beautiful.

And the Border Tribe they use these blankets, based on Ryan Coogler’s trip to South Africa and to the Lesotho Village where he stayed — and he fell in love with these blankets. So, he was like, Ruth, you have to get these Lesotho blankets. I was like okay. I’m gonna get ‘em. So, my South Africa shopper went to the company that made them and we got them in in all colors, you know. And then we had to get them all cleared, because they all mean different things. They have meanings as They hold them dear in their nation. So, we camera tested. We had like — I don’t know — 300 of these blankets that the whole army was gonna use. And Ryan said we need to lace them with Vibranium. Now what that means — okay. We need to make sure that they have Vibranium on them. So, we silk-screened the silver patterns that — you see the movie? Okay. So you see they had all those silver elements to them.

So that was all the screening process. Then we camera-tested the blankets. And I got a note from Marvel and from Ryan that the blankets were too thick. And we were like a couple of weeks away from shooting. And we had been developing the Vibranium on these blankets for weeks and weeks and weeks. We had imported these blankets from South Africa. And it was too late to redo our own design on a blank canvas, but I tried. I called every manufacturer known to man, and they were like we need a six-month lead on the blanket.

So, it was nearing Christmas and everyone was, you know, getting ready to leave and go for their Christmas break. And a few of us decided no break for us. We have to stay and figure out how to make 200 blankets that are beautiful more pliable. They were too stiff. The pile was too heavy. They just kind of, you know, just sat on top and sat as opposed to draping on top. And just one of my assistants said you know what. I’m gonna go get a shaver like they use in the barber. 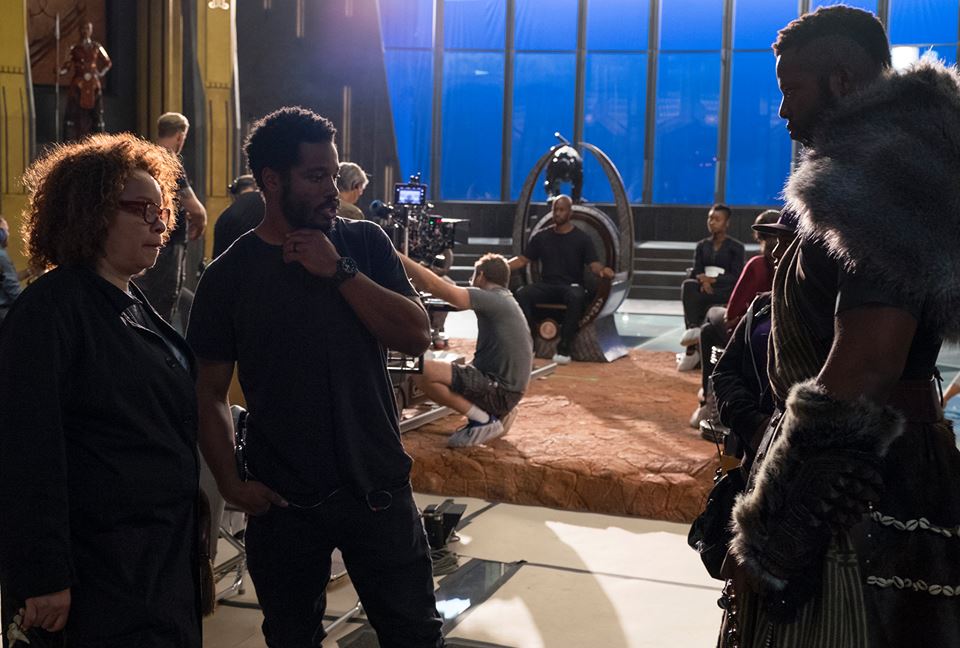 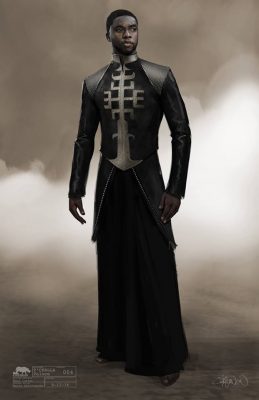 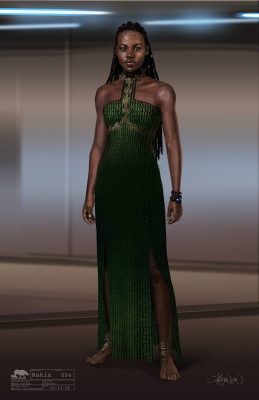 My Question: I’m a fashion blogger, but I usually don’t write about men’s fashion. But you styled Chad impeccable. How did you come about knowing what to put him in?

Well, when you look at the cast, you know, there is kind of the antagonist and the protagonist. You know, Chadwick is the king and then Michael B. Jordan is the antagonist, I guess.  So, the king is royal. The king is the king. We decided that, you know, the panther suit, well, the new suit was going to be a newer technology, more streamline, more beautiful, less for us than the Civil War one was. And so, that translates into his everyday wardrobe. I tried to pick things that I felt that would be body conscious. You see he wears a lotta more knits and sweaters — so that you see his arms. You’re like mmm hmm.

Yeah. And so, you know, he was fun to dress. We did the embroidery on his tailcoat. And that was a fun process because the first time he put on we tried so many different embroidery styles on there. And I was never really satisfied. And he would put one on and he was like, yeah, I feel like the Commodores right now. And I’m like okay. Okay, wrong. Wrong idea.

And then so I presented the problem to Ryan who was just so wonderful about, you know, helping you problem solve. Ryan Coogler. He said, here, I saw this beautiful dashiki and it had a gorgeous embroidery pattern on the front. Use that. And then it’s done. 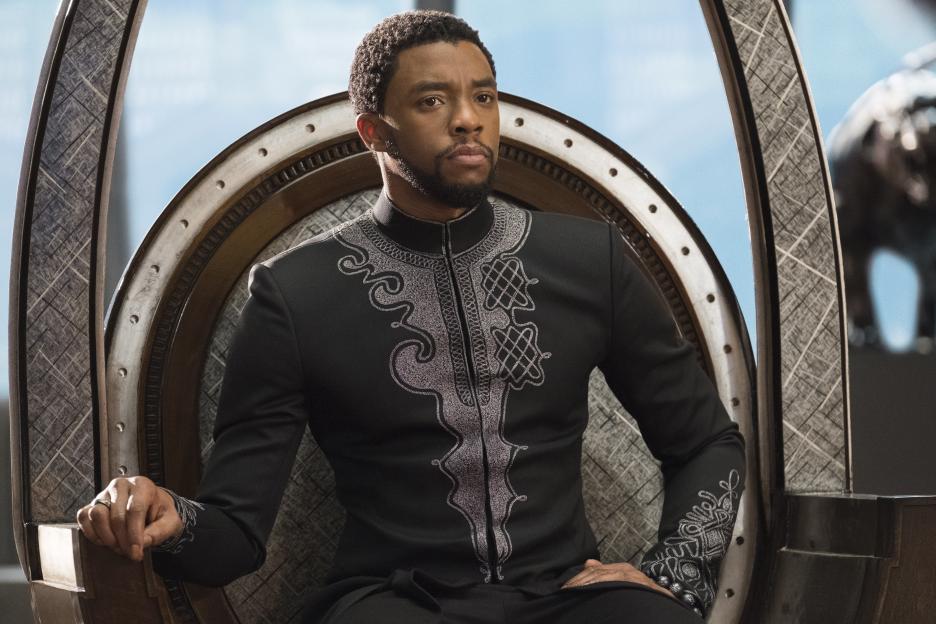 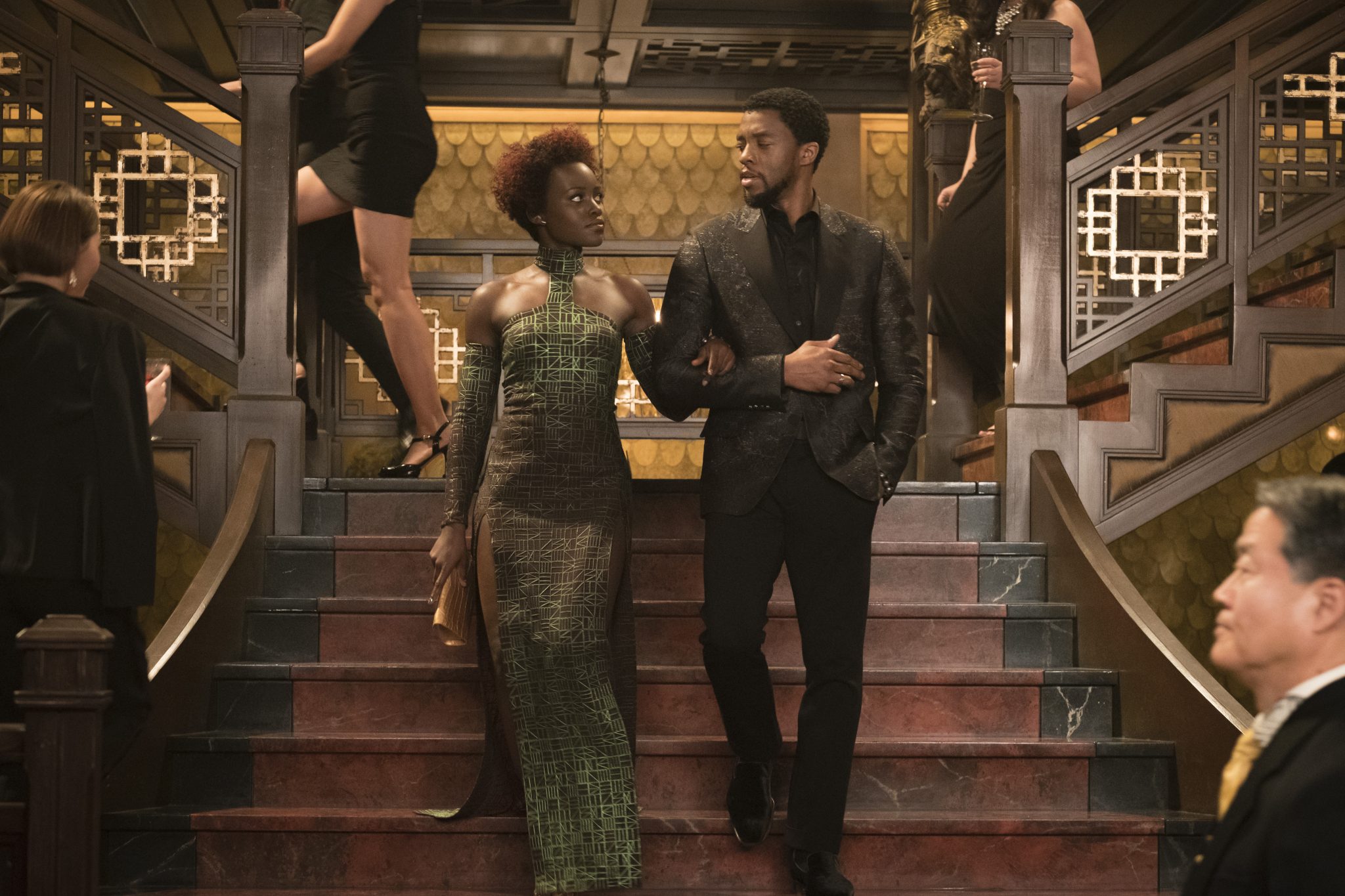 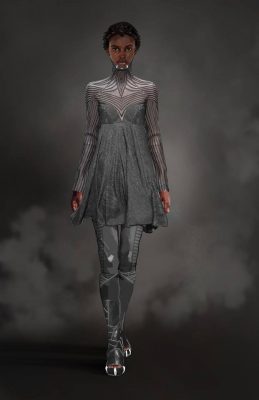 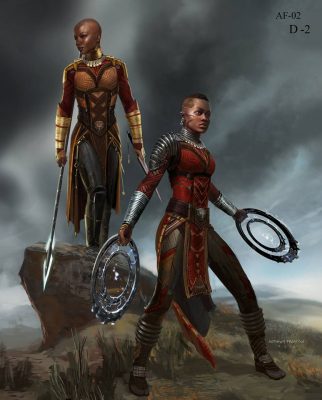 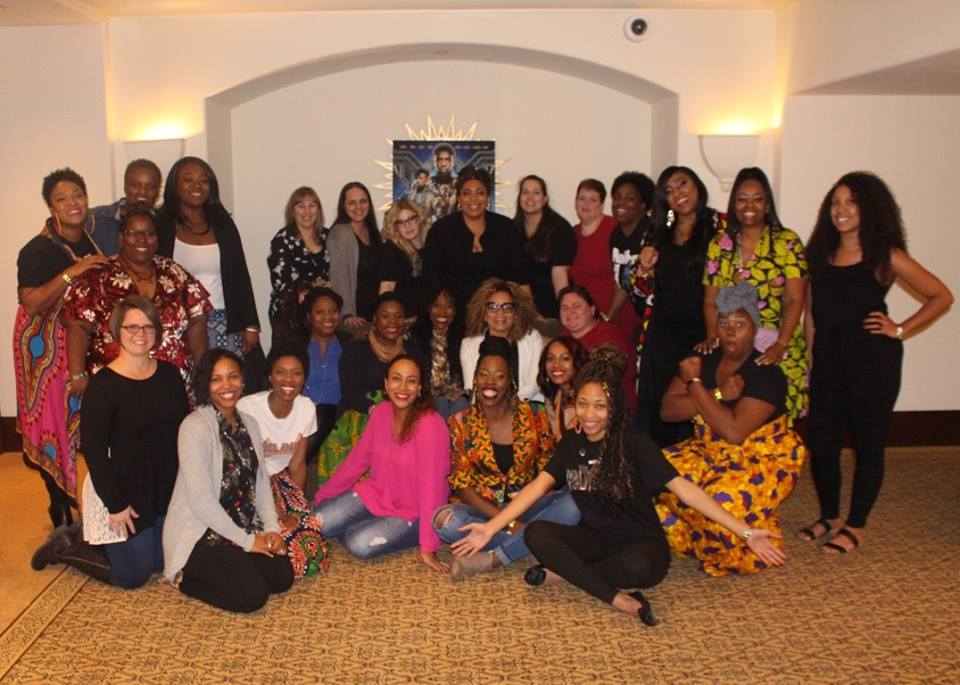 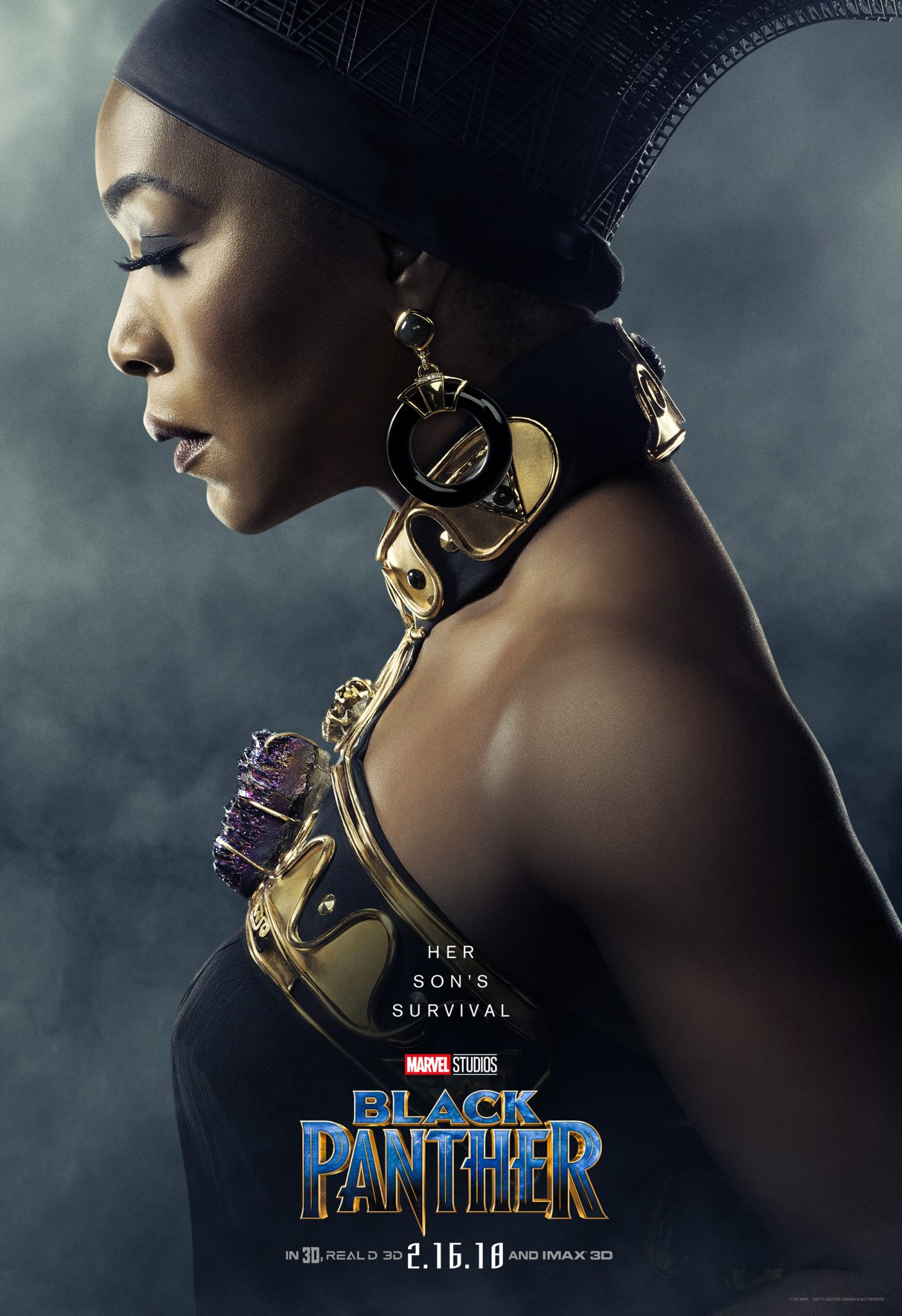