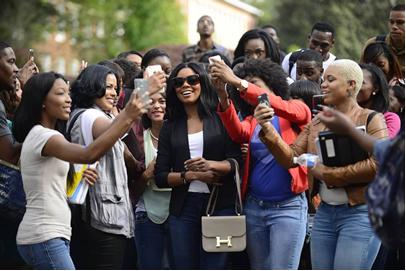 The first sneak peek trailer of BET’s “Being Mary Jane” Season 3 starring Gabrielle Union is here! Be sure to tune in on Tuesday, October 20 for a special two-hour premiere. New episodes to run on Tuesdays at 10 p.m. ET/PT after premiere week. Please see the viewing link and embed code below for the 3 minute trailer.

About “Being Mary Jane” Season 3
The third season of Being Mary Jane will find our favorite news anchor struggling to piece her life back together after the devastating car accident in last season’s finale. In an effort to move on after the crash, Mary Jane will cut ties with the two people responsible for the incident, her longtime best friend, Lisa, and her on-and-off-again ex-boyfriend, David. However, the driver of the other car, a down-on-her-luck bookstore owner named Cecilia, will have other plans. Meanwhile, Mary Jane finds herself sidelined at work when a beautiful young Latina anchor, Marisol, shines as her replacement, while she is out on medical leave. However, Mary Jane finds a way to save her job as Primetime anchor, but soon after leads herself to a “life cleanse” which causes her to rethink her actions. Yet just as things are finally looking up for her, a tragedy in the family will throw her world into chaos once more.
“BEING MARY JANE” is created and executive produced by Mara Brock Akil ; executive produced by Salim Akil and Gabrielle Union. Co-Executive Producers Devon Shepard; Claire Brown and Jeff Morrone. Veteran actors, Richard Roundtree and Margaret Avery, reprise their roles along with a stellar cast that includes Lisa Vidal, Richard Brooks, Raven Goodwin, B.J. Britt, Aaron Spears, Latarsha Rose and Stephen Bishop. Season 3 also includes guest star appearances by Loretta Devine and Jill Scott.