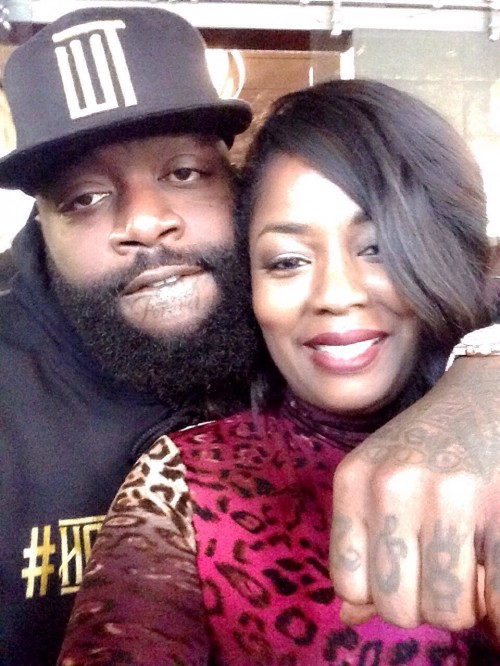 It’s Sunday and I am in a very relaxed mood after having a great weekend so far and this afternoon I am off to my Girls Night In. I was surfing the internet when I came across a story that my boo/Rapper Rick Ross was arrested and put in jail for possession of marijuana in his vehicle. The po-po pulled him over for having dark tent on his ride and when the cop told him to roll down the window, the weed smell was a dead giveaway lawd! I’ve been around him a million times and yep he smokes lol. It still doesn’t make me love him any less because to be honest, I know a lot of people that smoke but they ain’t never did nothing to me lol.

I have a special place in my heart for people like Rick Ross, they have good intensions but sometimes in the media they get a bad reputation. One lil thing that they may do thats not a good decision and people will throw them under the bus anytime they can but I try not to do that and judge people for how they treat me. Since I met him years ago he has always been kind, sweetheart and always stops to take a pic with me or do an interview, he is really a big teddybear in my eyes anyway lol. But lets get to the tea, that I also heard he did when he got out of the klinker!

TWT TEA: Word on the curb here in Atlanta is that when he bailed himself out of jail, he also bailed out a few other people that he shared a cell with! Seems that he bonded with a few of the other guys in jail and spent a few coins to get them out too! That was super nice of him and people won’t talk about that though.

I grew up around people in my life that were in and out of jail. From my own family members to friends that I hung out with and my own sister just got out of prison last year on my birthday! She has been clean for over 1 year now and I’m very proud of her. So I guess I just have a soft spot for people like this and WE all have someone we are close to that just seems to go back and forth in the system. Let’s just pray for them. Congrats to Rick Ross for doing good in the hood lol!