Everyone was seeing stripes at the DEGEN presentation. Herman created a plethora of graphic lines in a variety of new and core shades to complement the wildly colorful creations using a mix of new and core shades including Treble Maker and Daisy Know My Name? from the upcoming Electric Nights collection. DEGEN’s collection concept was rainbow thread so Herman created an interpretation for the nails. Designer Lindsay Degen’s collections are always so bright and fun but she puts a lot of thoughtfulness into her concept so Herman created a fun look that also had meaning – thread is literally the base and starting point of fashion, and figuratively humanity is a common thread in us all.

The runway was a wash in watercolor shades with pops of bold blues and purples at the Novis presentation. Herman created a two-toned “S” shaped design using Kinetic Candy, Shore Enuff, and Liquid Leather to perfectly complement the colours and design accents of the collection which featured waves, ruffles and bold patterns. The shades captured the ocean during the autumn time, a little moodier and stark. The black wavy stripe across the nail captured the feeling of movement and made the wave bolder and more abstract, like a piece of artwork. 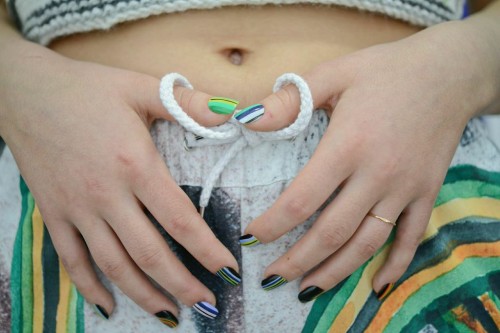