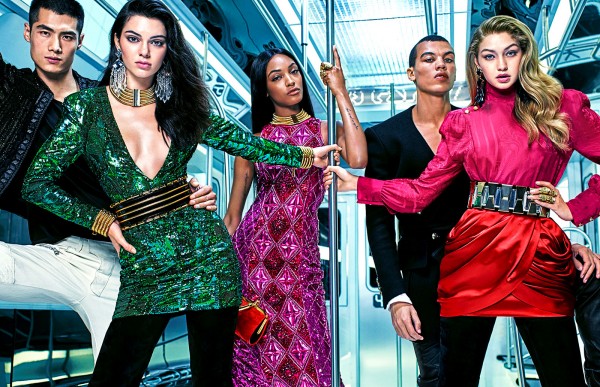 I LOVE fashion don’t get me wrong. I also like my share of designer pieces too but I have priorities and a family to take care of, so NO you did NOT see me standing in mile-long lines, or fighting over the Balmain X H&M collection that hit stores this morning and all around the world. If you tried to purchase online, the site crashed, then when it was back up, ofcourse EVERYTHING was sold out, smh! Yes, I did promote the collaboration too, told my readers about this highly anticipated collection but what you didn’t see was me acting a complete fool trying to get my hands on a piece of garb that was…let’s just say it, a pseudo replica of the real designer luxury brand lol! Let’s face it folks, Balmain X H&M is NOT really the real deal, so WHY were people acting so ugly today over this fashion brand! I have NO clue but really?

TWT TEA: Shoppers that actually made it out to stores across the world, have video footage of fashionistas lined up for days, camping out and standing in line to get their hands on one piece of fabric from the luxury label. Everyone got colored wrist bands while they waited for the doors to open at 9am. If you were in a group other than the first crowd called, you had slim pickings too! NOTHING was left but earrings and a few bracelets that nobody wanted lol. If fans of the brand did their research though, you would have known that the clothing only went up to size 12, which I’m sure was a junior size 12 anyway. Maybe thats why I didn’t really see many curvy gals in the videos or standing in line lol. Trust me, its not going to look the same on the average person anyway because of the way its European cut. If you are tall and thin, you may be in luck.

I’m sure there will be lots of returns once they see how silly they appear trying to look like the supermodels or the Kardashians who are brand ambassadors but its not made for everyone. I got to thinking that just maybe some of these thirsty folks who couldn’t fit the clothing would be there today to sell the items on Ebay for a quick buck too. My assumptions were right because they have already listed items for double the price, say what? Capitalism, don’t you love it! We as a society need to do better and stop acting like robots/sheep with no brains or self identity when it comes to all this consumption and things that media over hype. Target has also done these fashion designer collaborations but nothing like this, geesh! You would have thought that they gave you free food or housing for a full year with all the stampedes, fights and tramplings that took place.

I took a peak at the Balmain x H&M lookbook and most of the clothing items ranged from $150 and up, some things were listed as much as $550 for one dress, wow! A dress thats not really an authentic Balmain designer piece though? No way would I spend that kind of money at H&M who has really cute stuff but normally have very reasonably priced goods.

I’d rather spend my hard-earned cash on a pair of pretty shoes or go on a mini getaway than go through all that hassle anyway and be disappointed with the quality and everyone and their mama wearing the same look. I truly think it was all hype for no reason but for those of you that did get your hands on anything congrats to you but was it really worth all the aggravation? Do better people, till next time! xoxo

Somewhere else in the world…