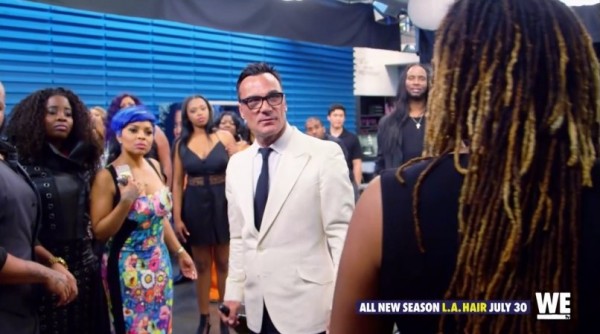 This season, Kim continues working with her A-list clientele, taking her brand to a whole new level. She still has lofty plans to expand her business to Atlanta, the hair capital of the world; but that dream gets put on hold when she gets a tempting offer to partner on a wig and extension line from the bad boy of Hollywood Hair, Jonathan Antin. He makes big promises with investor dollars and appearances on QVC, but is this deal too good to be true? Will Jonathan be the ally Kim has been looking for to help expand her brand? Or will he end up her worst enemy as he tries to carve out a piece of Kim’s lucrative business for himself.

Also this season, Kim provokes the fury of her sister Leah when she secretly hires a fiery new stylist from Atlanta (Gocha), who throws the salon into chaos. Partnerships crumble, snitches are revealed, and the shears come out on this dramatic new season!

In the premiere episode, Kim has an opportunity to style the Queen of Hip-Hop Soul; who is making her first appearance on Fox’s hit series “Empire”. At the same time, Kim gives marching orders to her staff to create unique looks as a pitch for an LA Fashion week event. Terry is appointed the lead, but can he take control of the staff in her absence? And when Jonathan makes a surprise appearance at the salon with a mysterious envelope, all hell breaks loose!