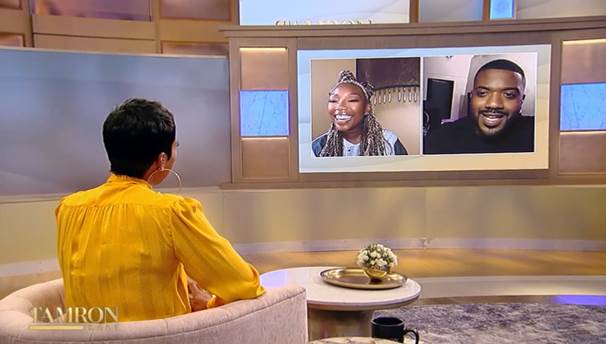 Following the release of her album “B7” and her performance at the 2020 Billboard Music Awards, Grammy-winning singer Brandy joins the Wednesday, October 21 edition of “Tamron Hall” and discusses her decision to open up about her struggle with depression as well as her new music. The actress and singer also teases the possibility of a reboot of the popular television sitcom “Moesha.”

On her decision to open up about her mental health in an interview with People Magazine:

“I think it’s important for me as an artist, as a vessel, to use my music as a way to tell my story. I feel like there are so many people out there who go through their own things, their own issues, and when they see someone like me open up, they can feel like they’re not alone. I think that that’s my path. I just want to be an inspiration and a help for other people to get through some of the things they go through in their everyday lives, their everyday struggles.”

On her daughter Sy’Rai:

“She is my angel, she is my light and she really doesn’t understand how many times she has saved me. So many moments where I felt like giving up, she has been the reason why I’m still here today and I’m still doing what I’m doing. She’s everything to me. She’s my world.”

On how it felt to perform at the 2020 Billboard Music Awards:

“It feels like a miracle. It’s a blessing to still have the love and the passion that I have for music and to perform on such a monumental stage with Ty Dolla $ign was really just a blessing and I appreciate my team for hooking that up for me because the stage is like a second home for me. For the people who were watching at home with all the love that they showed and expressed, I really appreciate that.”

On the eight year gap since releasing her last album:

“In that eight years I discovered so much about myself. I had a great experience on Broadway, I was doing a lot of acting roles that I got a chance to play so it wasn’t just a complete hiatus but it was a lot of self-reflection and a lot of, you know, facing some of the things I had to face about myself. And then also, put my music into a place where I felt creatively free and respected. I got myself to that place and it took a lot of courage to do that. I’m just so happy that I’m back and I’m back doing what I’m born to do.”

On the possibility of a “Moesha” reboot:

“I at least would like to try to see what kind of script we can come up with for ‘Moesha’ the reboot. I think because it left such a great mark and the creators did such a great job at putting together such a memorable show, I don’t want to mess with the legacy of it, I don’t want to mess with something as classic as ‘Moesha,’ and I say that humbly because I didn’t create the show. But, you know, I do want to take a shot at it just to see how it can go. So I’m open to it, I just want to make sure it’s the right move to make.”

Later, Brandy’s brother, singer and entrepreneur Ray J, joined the conversation to discuss his sister’s new music and his kids.

On his sister’s new music and her decision to share her story with her fans:

“I thought it was great. I think it was honest. I think that sometimes when you tap into your real story and you let people know what you’re going through, you start to realize that a lot of other people are going through something very similar. Sometimes your journey can help their journey and vice versa. I commend you B, I’m proud of you. The album is some of your best work ever.”

On if he’ll ever encourage his kids, Epik and Melody, to go into the entertainment industry: