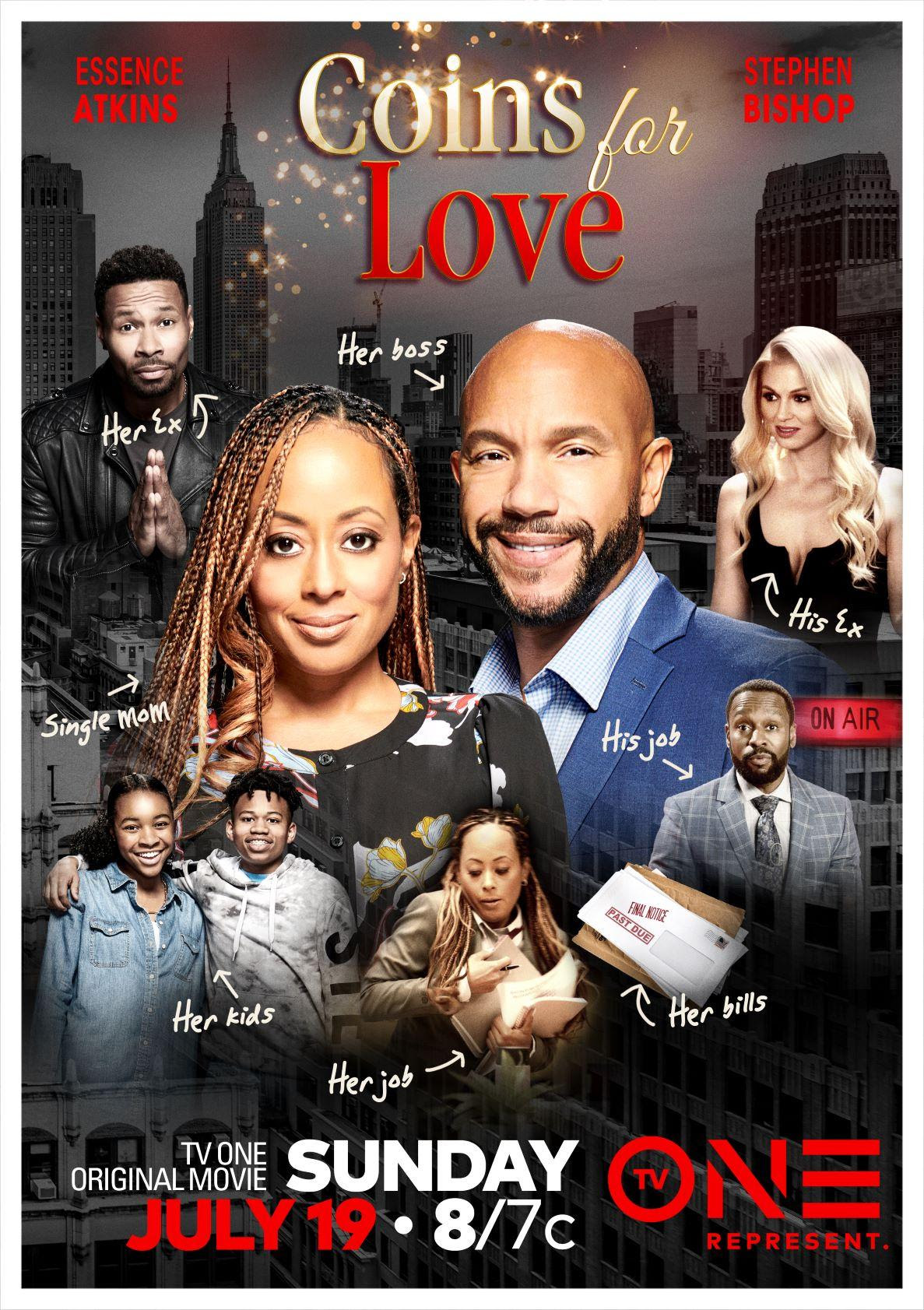 TV One follows the success of its popular film COINS FOR CHRISTMAS with the premiere of the sequel, COINS FOR LOVE. The film’s stars Essence Atkins (“Ambitions,” “Marlon”), Stephen Bishop (“Imposters,” “Being Mary Jane”), TC Carson (“Living Single”), Kendrick Cross (“Ambitions”) and Karon Joseph Riley (“35 and Ticking,” “A Christmas Blessing”) return to continue this blossoming love story. It will air on Sunday, July 19, at 9 P.M. ET/8C, followed by an encore presentation at 11 P.M. ET/10C.

“I was happy to bring the Coins family back together for the audience,” shared Bishop. “If you enjoyed Coins for Christmas, I think you’ll really love this one!”

The sequel reunites audiences with single mother Madison Morris (Atkins), who finds herself starting over. Madison lands her dream job at a publishing company. To her dismay, however, she must complete a probationary period and will not receive her full salary until the process is over, leaving her in a financial struggle. With a new career and struggling to make ends meet, she works under the demands of her new job while raising two teens on her own. Making matters even more complicated, she finds herself torn between an old flame and a new love interest.

Alec Darby (Bishop) has also started the job of his dreams on a national sports network but soon clashes with his co-host Demarco (Cross). Madison and Alec have a chance encounter and connect to discuss their career challenges, prompting Alec to offer Madison a side gig as his personal assistant to help supplement her income. The two embark on a great working relationship, and sparks eventually start to fly but not before Alec’s ex-fiancée reemerges in the picture. Madison’s ex-husband also comes crawling back with promises of a fresh start adding to the drama. Tune in to see if the couple’s budding relationship will be able to withstand the ultimate test – their Exes – in this romantic drama.

“It was and always is an absolute pleasure to play with Essence, Stephen and the rest of the uber-talented cast,” said Riley, who plays Jake. “As usual, we had a ball, and that is exactly what the fans should expect. A good time with a little bit of everything for everybody.”

COINS FOR LOVE is executive produced by Urban One Founder and Chairwoman Cathy Hughes, written by Susan Banks and directed by Jamal Hill, with casting by George Pierre. The film is produced for TV One by Swirl Films, with Eric F. Tomosunas serving as Executive Producer. James Seppelfrick, Ron Robinson and Keith Neal serve as producers. For TV One, Jason Ryan is the Executive Producer in Charge of Production, Donyell Kennedy-McCullough is Senior Director of Talent & Casting and Robyn Greene Arrington is Vice President of Original Programming and Production.