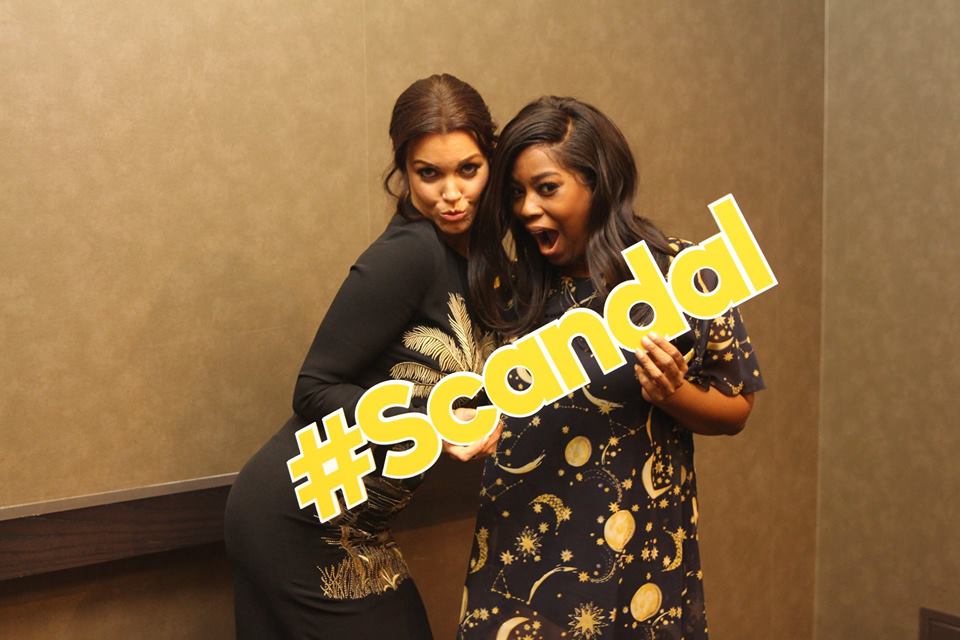 While I was out in Los Angeles a few days ago, I never expected to connect to an Actress like I did with Bellamy Young! You Gladiators out there know who I am talking about, yes she’s the freaking President and she is beautiful, smart and funny! I got to sit down with “Mellie Grant” and chat about her role in A Wrinkle In Time, fashion, fat pants, Scandal, and so much more! She was so chill and down to earth and I also found out that she was also a pageant girl, squeals!!!! Step inside to read all about it and see more pictures!

I loved how when Bellamy walked into our room, she was totally shocked when we gave her a standing ovation! She has never been in a room full of bloggers before lol. She loved it and the look on her face was pretty priceless! 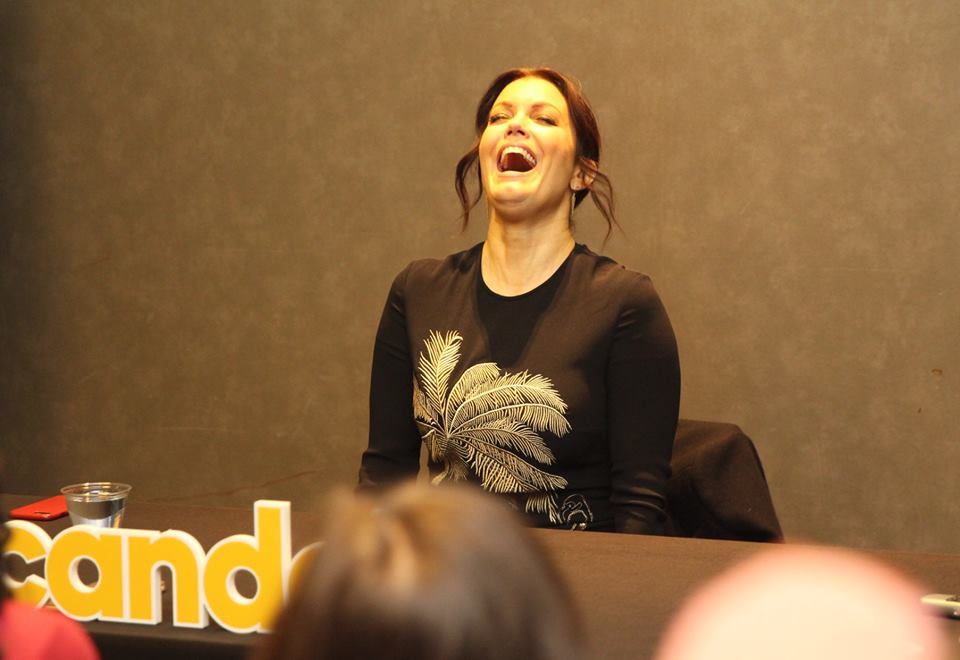 Role as “Camazotz Woman” in A Wrinkle In Time?

Bellamy: Well, you know. I mean, I have so little to do in the movie, but I was. You’re the best. Let me say this, because you’re too cute, and I don’t want to lose it, okay. Ava had directed a second season. And she called and she just said, “Would you like to do like, two days on this movie?” And first of all, if she called and said, “You want to do two days in my garden?” I’d be like, “Yes, I do, please, I’m bad at planting but I really want to be there.”

And I had loved this book so much when I was a child. And so it just made it all the better. And it was November 8th and November 9th, so it was election day. And then overnight. So the whole ride has been crazy. But now you’ve seen it. It looks so pretty. Is it so pretty? Oh, my God. Oh, my God. Okay. I’m taking your time. You have all the answers. I don’t know what I can tell. 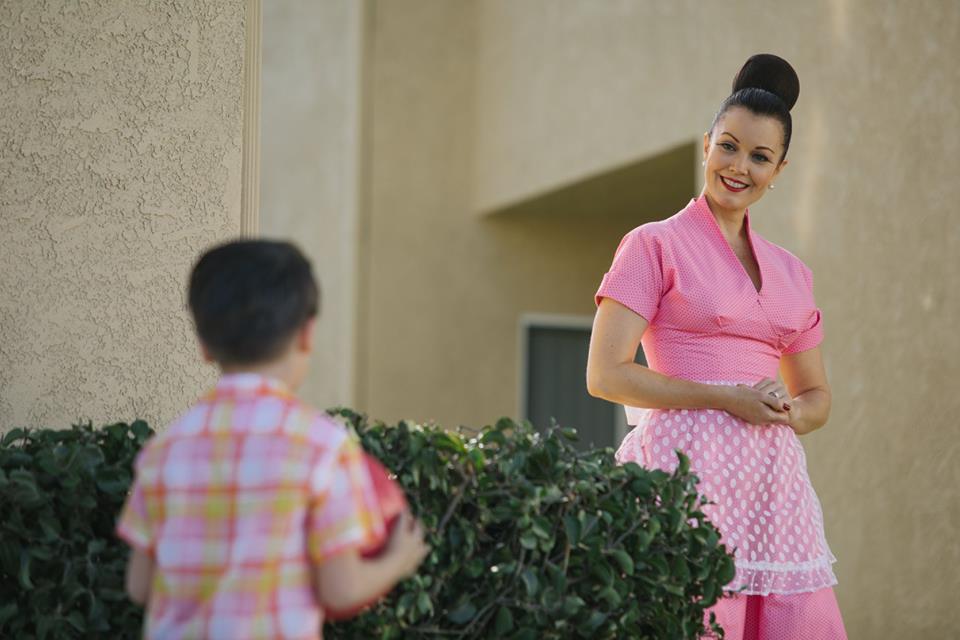 What has Mellie Grant from Scandal taught you?

Bellamy: Like, A, everything, right? ‘Cause, I was only supposed to be there five minutes. So, has taught me, first of all, you show up and you do your best work, even when it’s two lines, and you might not be there for a minute. You never know what’s going to turn into your dream. You never know which lottery ticket might pay, so always showing up for yourself, and doing your best work, regardless. But, Mellie, man, she does not care if people are comfortable.

Like, I want everybody to be happy all of the time. I would make you all coffee if I could. I would do some back rubbing. I really do. Mellie could care less. So, spending 16 hours a day as sort of like, my way or the highway, has been very informative. I don’t think I will ever lean that direction, but it does remind me that there are many ways to be. And many acceptable ways to walk through this life. And it has been a deep privilege, an enduring privilege, to get to have been her.

She’s so flawed. But she has such big dreams, and she’s doggedly loyal, and will fall on her face, but she will stand up and walk forward, like the Terminator, do you know? Like, all of that skin just like, hanging off her face? I yeah. I marvel at her. It’s been a great, great gift. Not just the fact of having a job, but the fact of getting to be her. 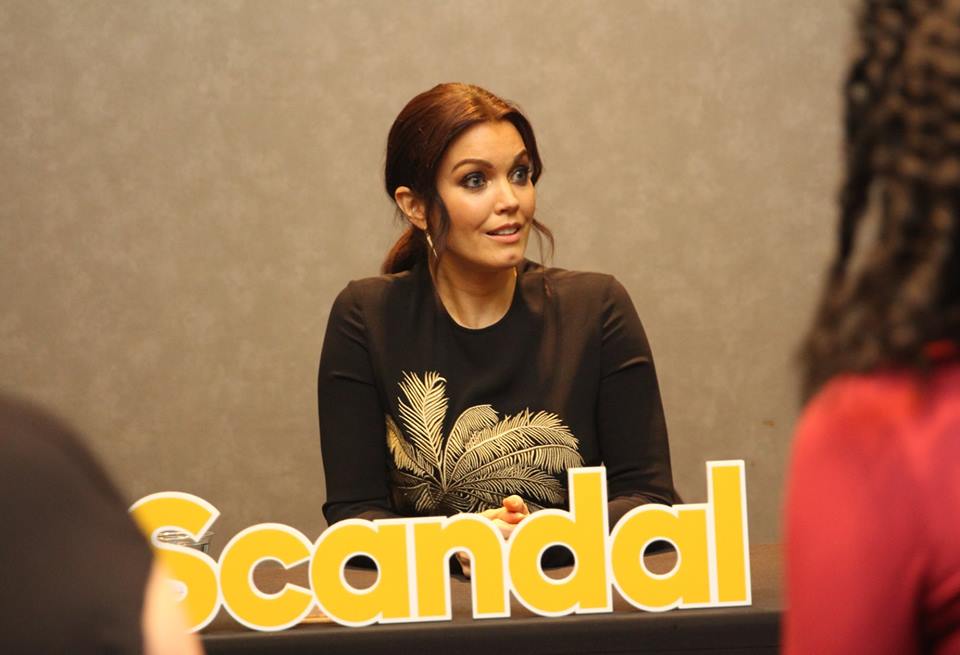 What is an average work week like for you on Scandal?

Bellamy: It varies by script. Because, sometimes, you’re like, not really in it, and it’s fine, and you’re an actor, so you’re lucky, but our crew is there at least 14 hours a day. Most we can’t really work past 17. Because we have union turnarounds, and that they can’t call you in again the next morning, and if you work too late, then by Friday, you’re coming at like noon, and then you’re working till Sunday. But, yeah. I mean, KW, especially those first few years, like, I mean, ’cause, her especially the first two years, her pre-call was three hours, like, hair and makeup.

And then she’ll work up to 16 hours after that, and she’s a superhuman person. Because she never — I would be so cranky. I would be so tired, and angry, and, like, but she never. She’s so indomitable, everyone’s best cheerleader. And, so, actors?

We’re the luckiest, but, like, transpo, hair, and makeup? They’re there from the get, and they are there till everybody else goes home, and it’s brutal on the crew. It is. One hour is crazy.

But we learned a little in the crossover that, you know, we get home earlier than Murder. So there ya go. 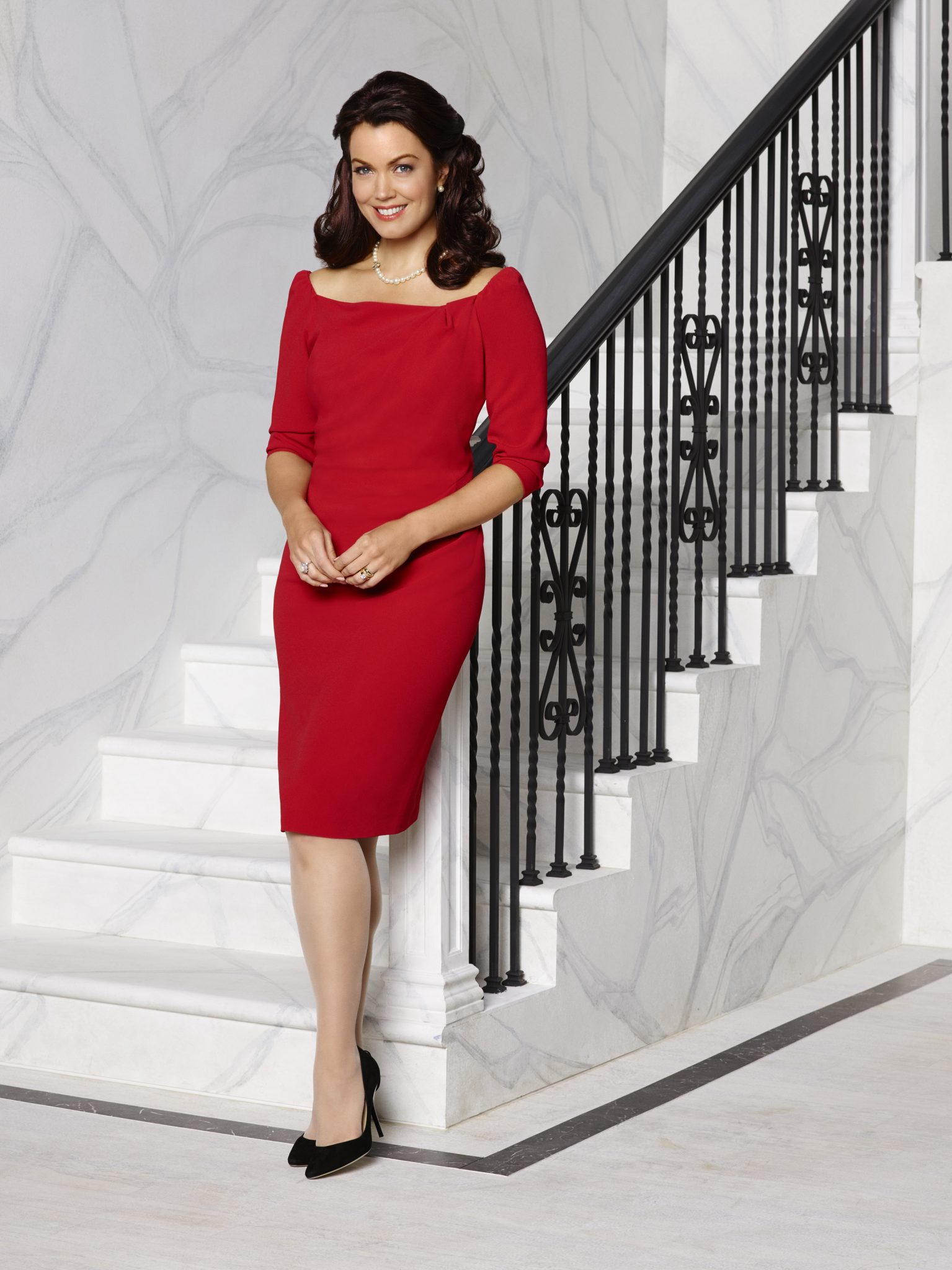 (My Question) When you are not working, what do you like to wear?

Bellamy: Fat pants. Fat pants. Fat pants, and sneakers. I am the worst woman. I don’t like to shop. I don’t like to be uncomfortable. I know. It’s just terrible. I have to dye my hair for two weeks because I’m like, white as the sun right there, and that’s like, my only girly thing. And my nails I can’t even get on nail polish today. I know I gotta do it at five am tomorrow morning, sitting in the hair chair, getting nail-ified, so I’m like, “Oh, I’ll just go with clear.” Yeah. Comfort. Do you look this pretty all the time? Yes?

Me) I’m a fashion and beauty blogger, and I just love you…

Bellamy: I don’t want to disappoint you. I’m so sorry. No. No. Don’t tell ’em all, I’m just a nasty sort of rolling-around.

Bellamy: I was a pageant girl, but I also think it’s like an implicit gender inequity, the time and money it takes. Darby and I were just texting about this last night, ’cause we have a bunch of stuff to do this week, and you know, every time you leave the house as a woman, it’s going to cost you at least a thousand dollars. Like hair. Makeup. Clothes. You’re giving back. You don’t get to keep ’em. You like, just got a stylist to borrow it, and you gotta pay ’em. But, and the men all make more anyway, and they don’t pay anything, they just show up in that same handsome Brooks Brothers suit that somebody gave ’em second season, and t makes me a little crazy.

Me) Are you going to be at the red carpet tomorrow? 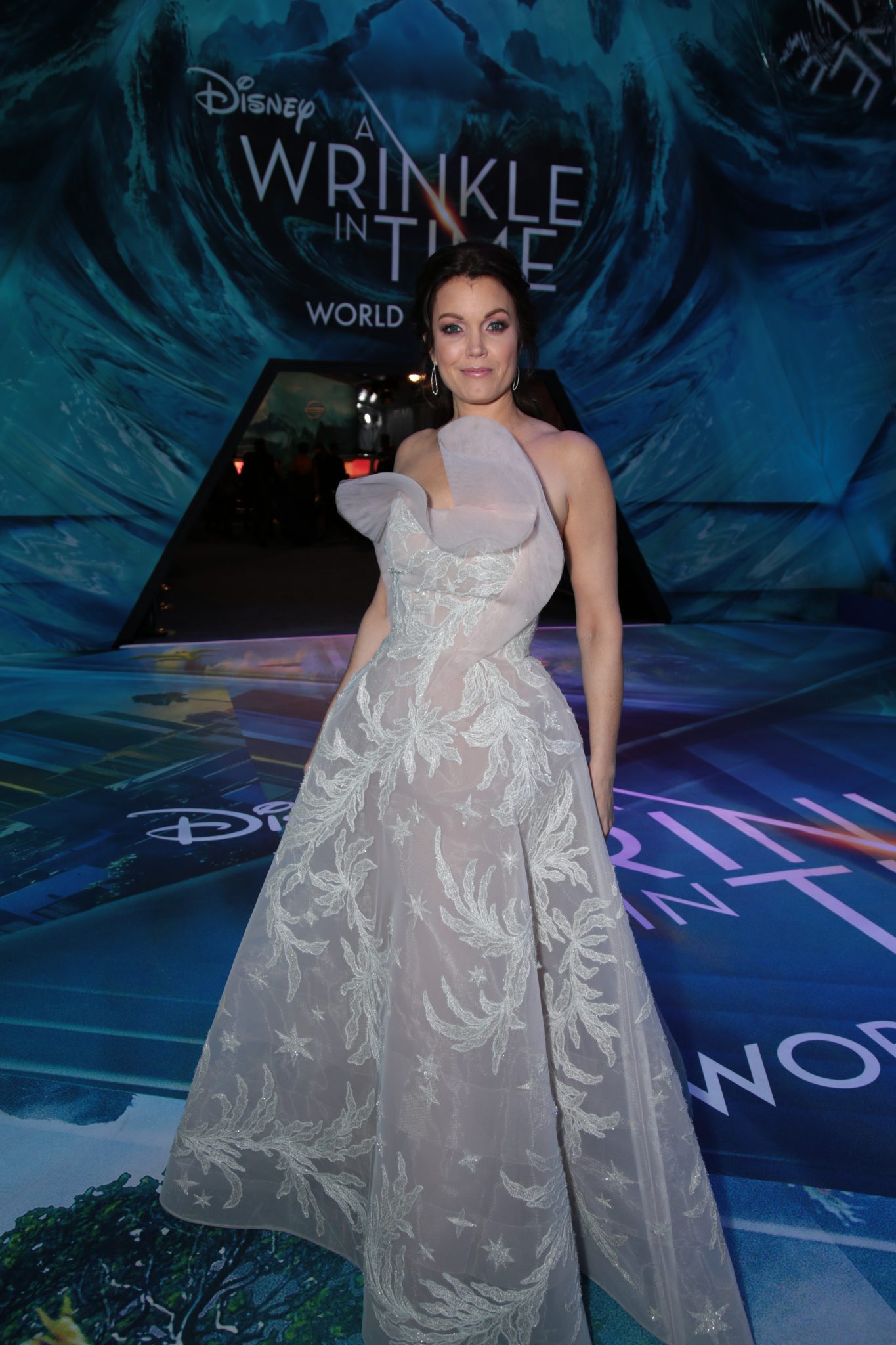 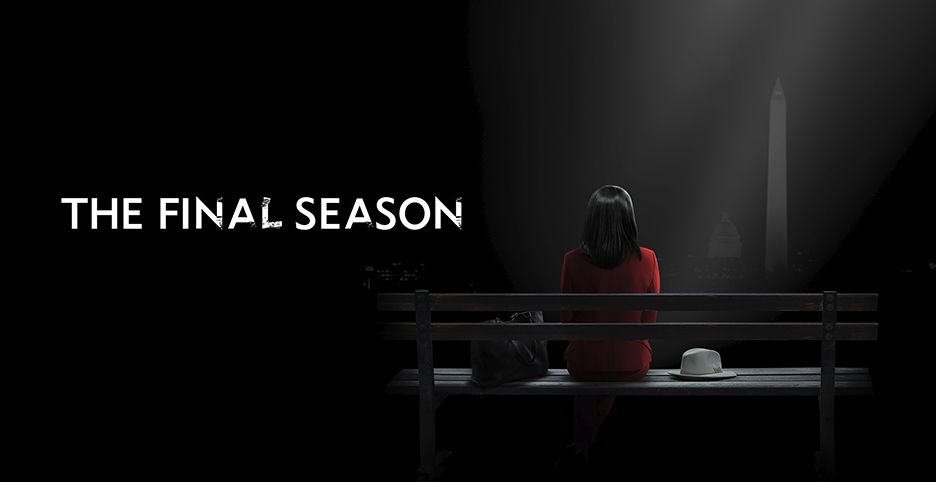 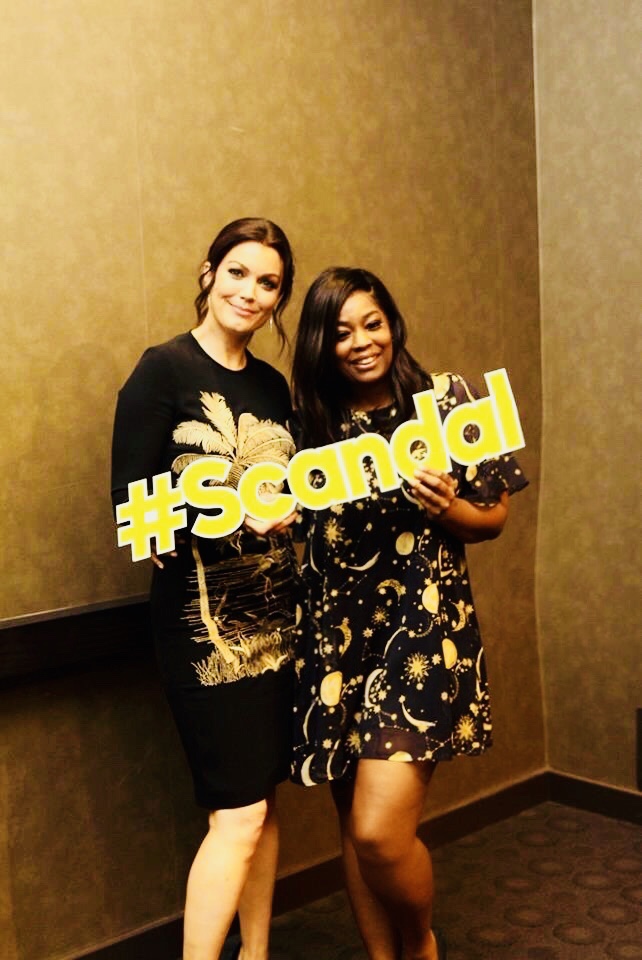