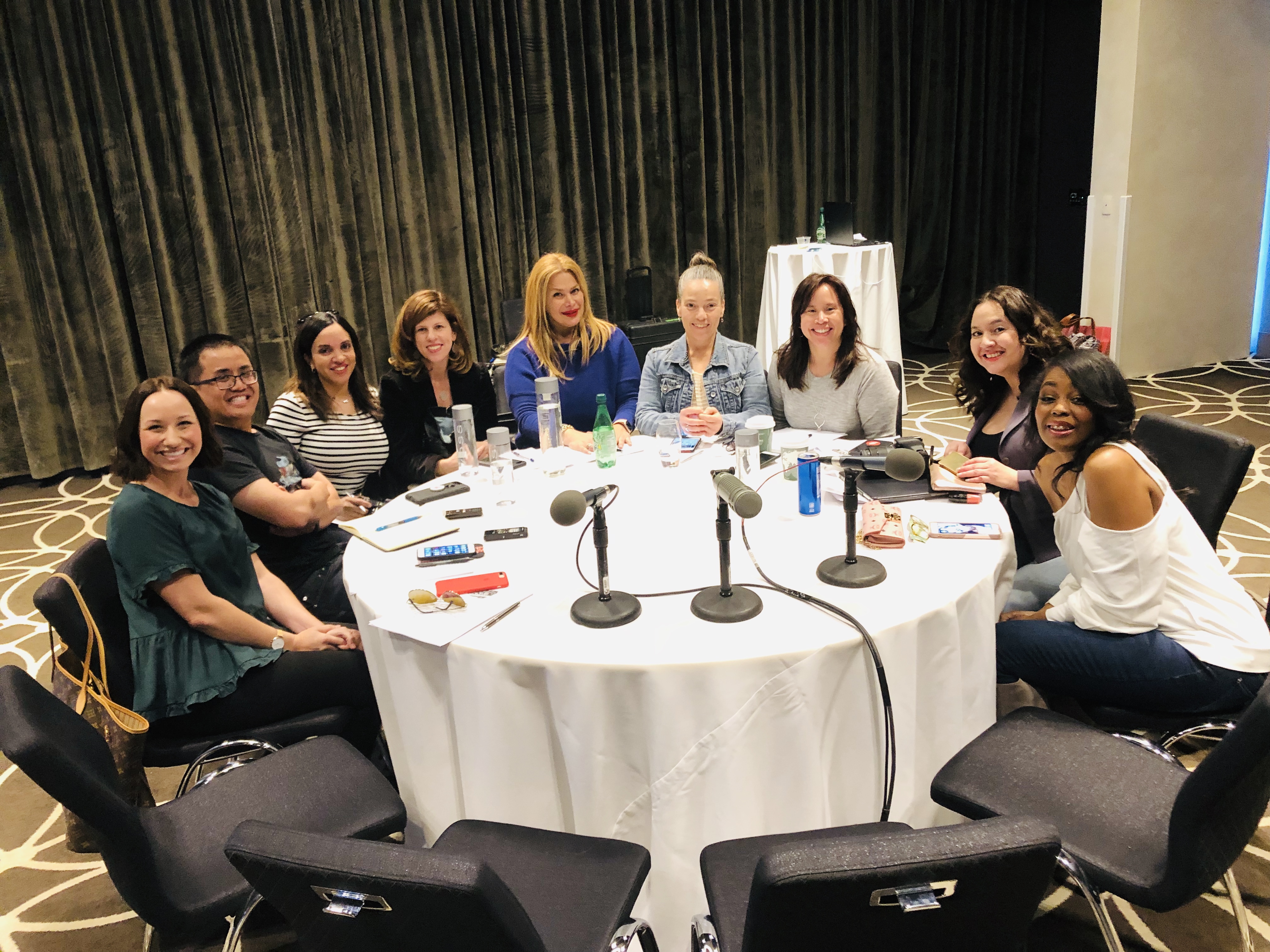 I had an amazing time out in Hollywood last week with Warner Bros for their upcoming film, The Lego Movie 2: The Second Part. I had the opportunity to check it out at the TCL Chinese Theater on Thursday, January 24th and I must say it was hilarious and a film that I highly recommend you seeing with your entire family. After reviewing the film, on Friday, January 25th, we got to sit down with some of the Actors from the movie, Will Arnett(Batman), Tiffany Haddish(Queen Watevra Wa’nabi), Chris Pratt(Emmet & Rex Dangervest), Elizabeth Banks(Lucy) and Stephanie Beatriz(General Mayhem). Plus we got to chat with Producer/Screenwriter Phil Lord & Christopher Miller and Directors Mike Mitchell & Trisha Gum. EVERYONE was super chill and fun to talk to about the Lego movie. Check out inside what they all had to say and don’t forget to head to theaters on February 8th, it’s such a treat! 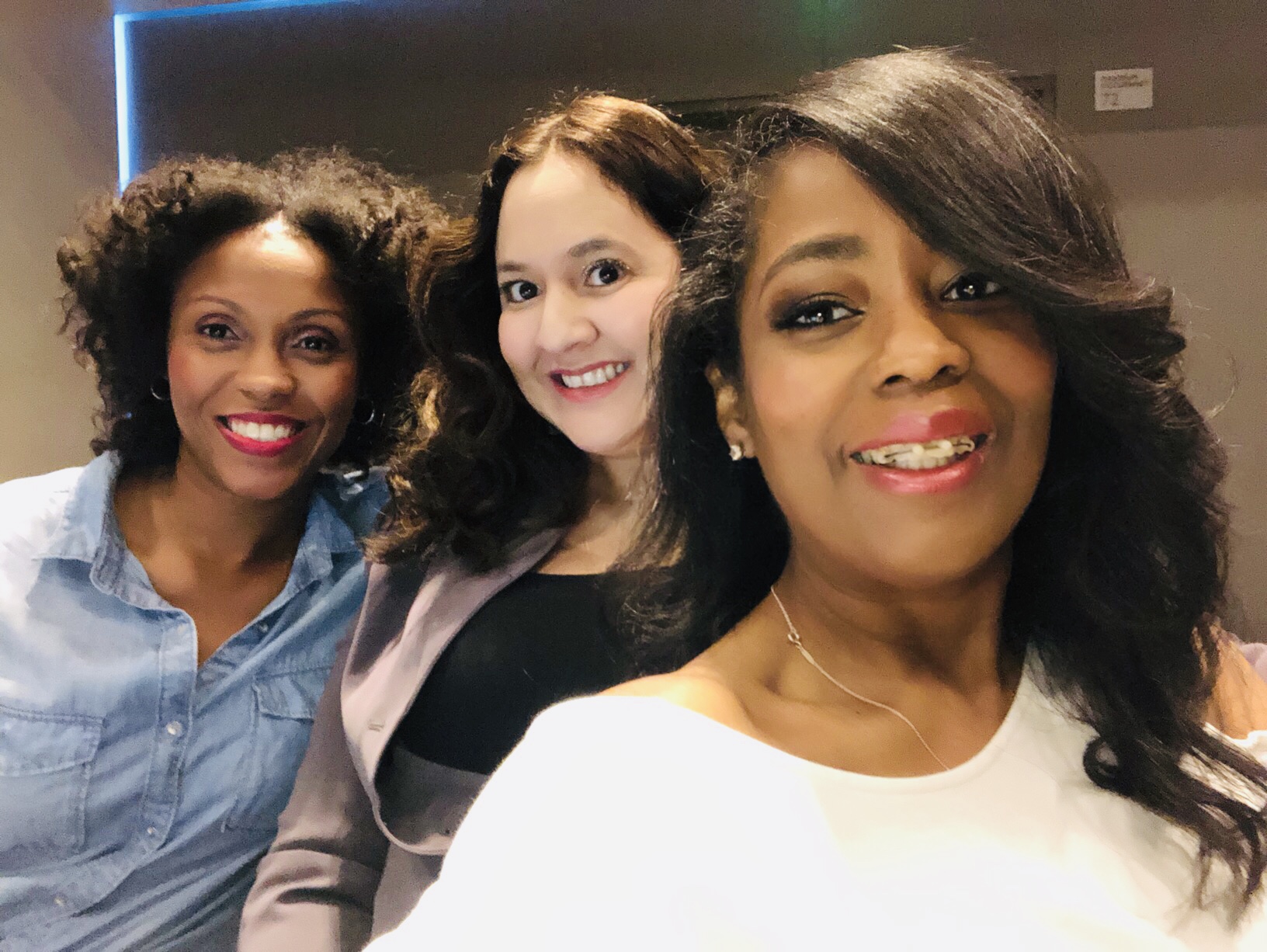 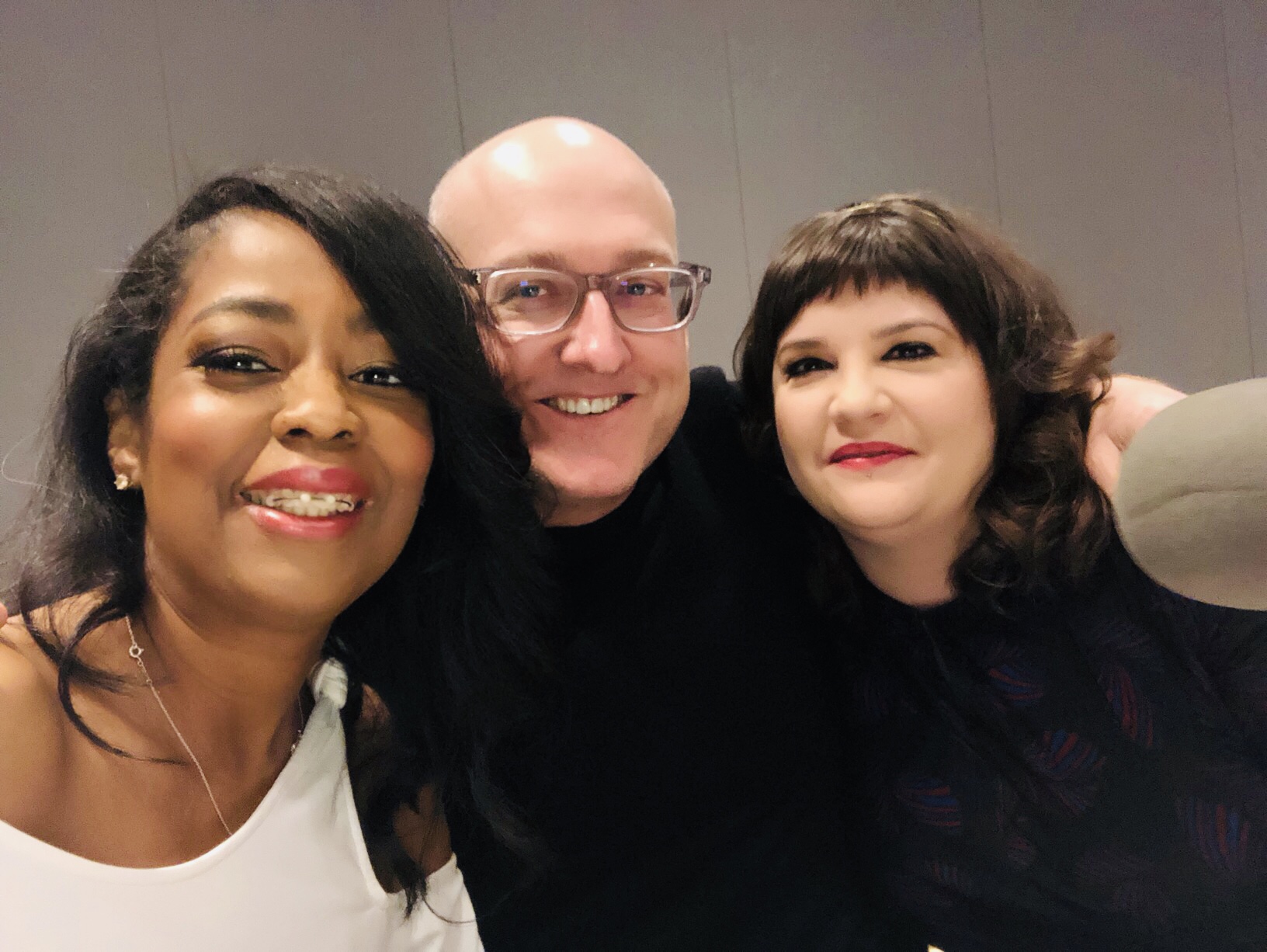 How do you feel being the anonymous hero, so to speak?

Yes. When we first came to this project, all the people that had worked on all the LEGO films, they’re like, “We are so tired of that song.” And I was like, “It has to be in the film. We have to have this song in the film.” And then we did the twist on the song. And then, our song writer John [unintelligible], he heard everyone talking about like, “It just gets stuck in your brain. It’s so annoying.” And he was like, “Guys, I wrote a song about a song that get’s stuck in your head.” We were like, “Let’s put that in the film!”

How long did the project take, and what do–was there anything that you wanted to do that didn’t get done?

I wanted to know, how did it come about adding Tiffany Haddish?

Mike: That was–well we knew we wanted a character who was going to shape-shift and change into different things and almost be like that genie from Aladdin.

Trisha Gum:  Right. And we wanted somebody like funny and strong and confident, and she just–she embodies all those things that we wanted.

Mike Mitchell:  Man, she exudes that energy. She never loses her energy. Trish and I would be exhausted at the end of recording her voice. She is unstoppable, right? 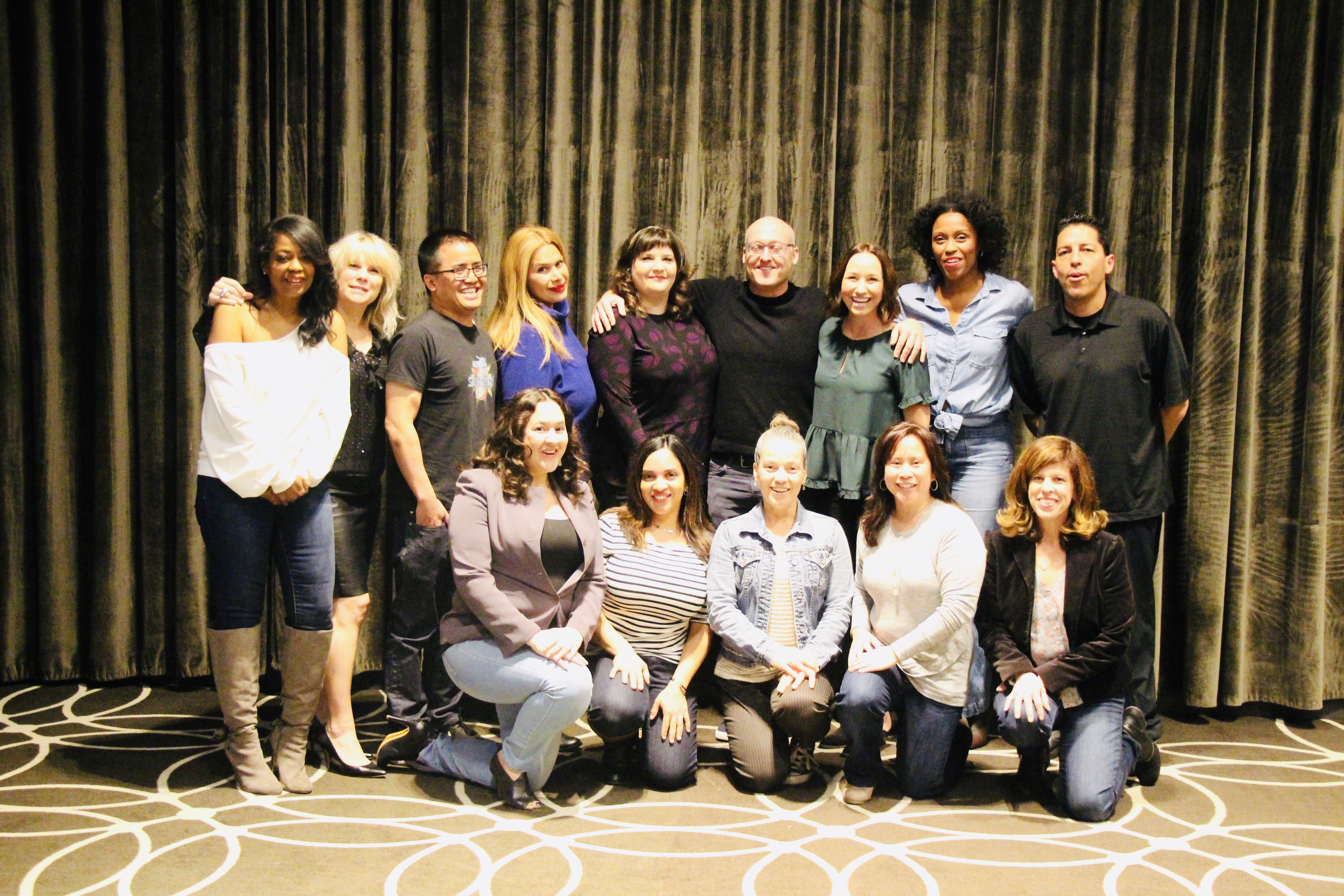 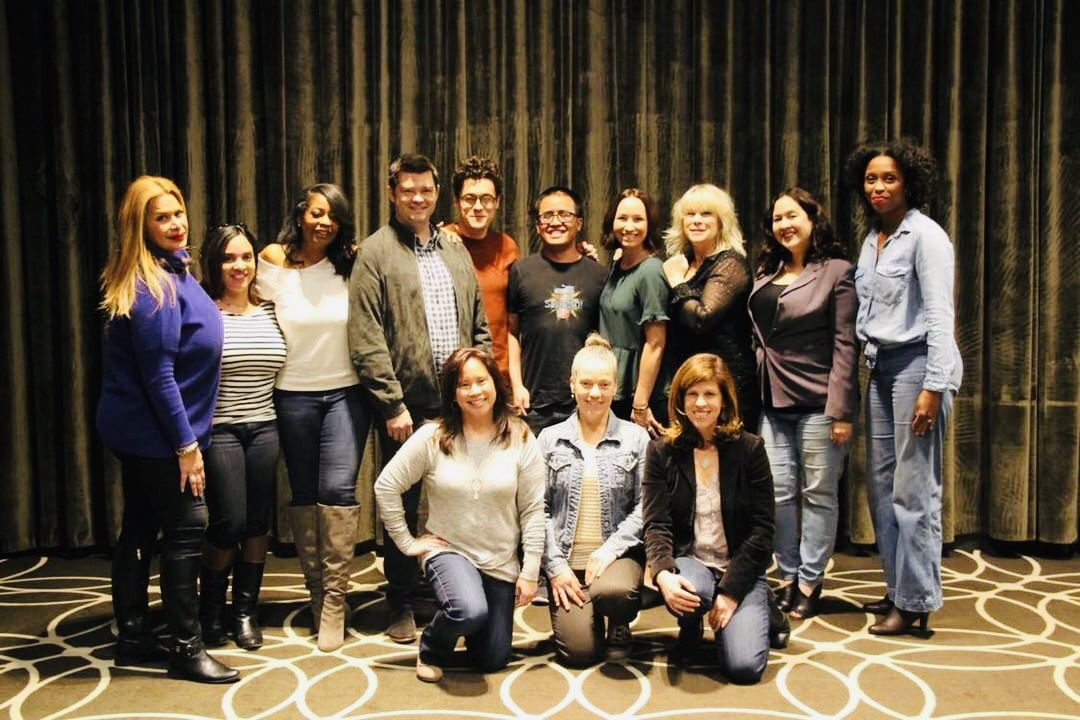 Guys there’s two huge successful movies in your role, Spiderman, Spider-Verse, and then this one.  What is it, what is the recipe?

Christopher: That’s a good question. I don’t know, let’s hope, you know, we just try to make the movies as good as we possibly can.  We have great partners, and we collaborate deeply with everyone.  And we play to the buzzer.  You know the reason these movies turn out good is because they turn out bad like ten times in a row before it gets released.  And we–and then we go back into everything and realize what we did wrong, and we just try to keep making it better every day.

And because you have to work on them for so many years it has to stay interesting and inspiring.  And then on top of that, then you can add all of the jokes and the craziness and the silliness on top of that.  But it really has to have a foundation of something, that’s really about something. 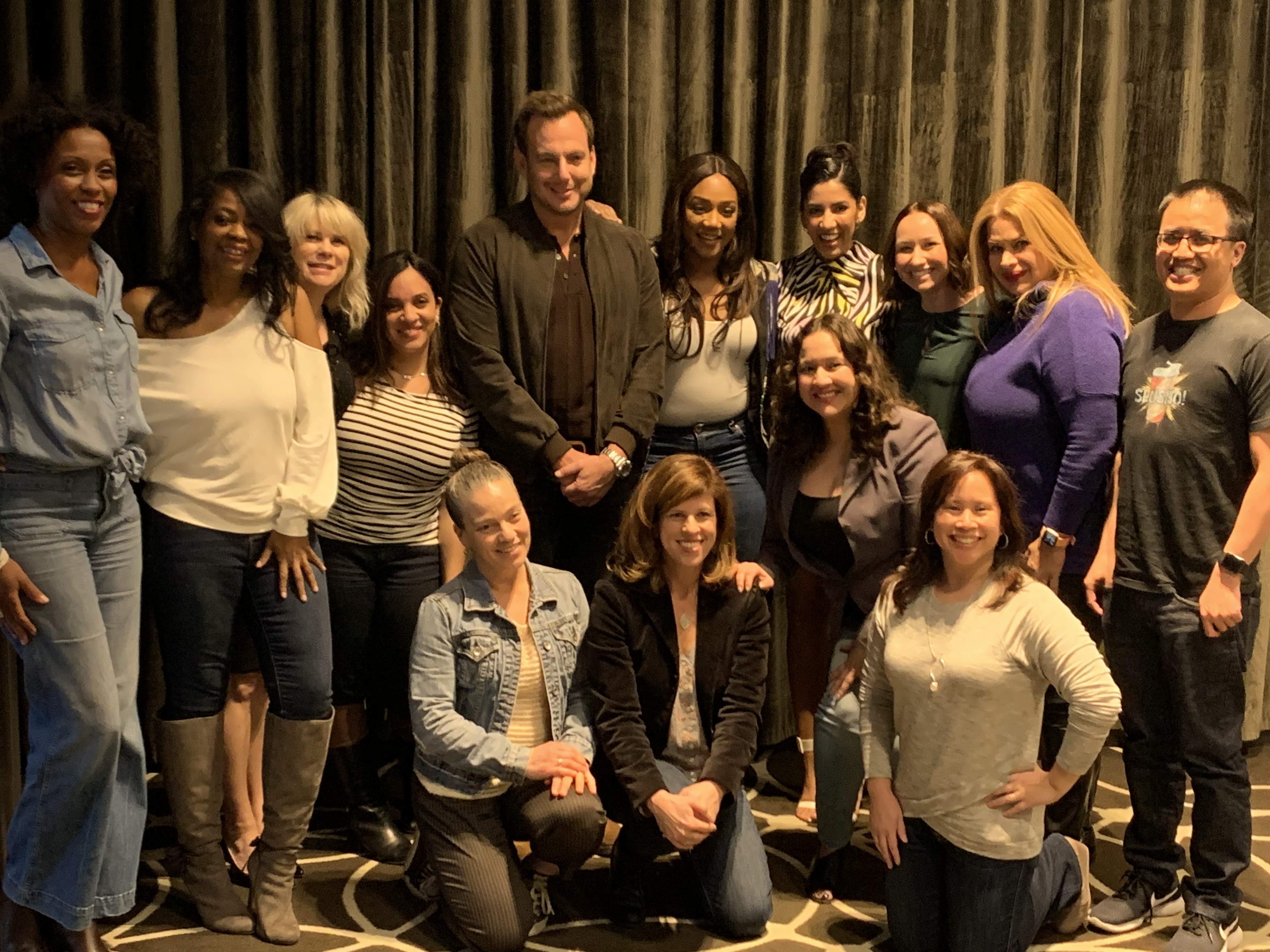 With Actors Will Arnett, Tiffany Haddish and Stephanie Beatriz

So how’d did you feel about joining the LEGO family?

How did you feel singing in the movie?

Tiffany: Yes, I felt good with it.  I was happy.  Yes I took some vocal classes from Groupon, and boom. She ready!

Well, I have a question for all three of you.  How is your own personality similar or different to your character that’s in the movie?

Stephanie: I think my character starts out this film in one place and ends in another, right.  And I think the beginning of it is a lot of what I felt as a preteen girl, as well. Which is like what am I supposed to look like or be like, or who am I supposed to be, and what does everyone else want me to be and how am I supposed to act and dress and look and talk, so that people believe that I can handle myself.

And the reality and the journey that happens in this film is that this character sort of finds herself and realizes that her creativity and her true self can be whatever she wants, which is why this is her queen, right?

She can literally be whatever she wants.  And I think that that’s such a beautiful sort of hidden message to share with kids.

Will: Yes, I mean you know luckily I don’t have a personality.  As Tiffany has reminded me a lot in the last couple of days.  She actually said, she said, “I’ve never met somebody with less personality than you.”  That’s a direct quote.

No.  No I don’t know.  You know I think that in terms of similarities, I can identify with this idea of a guy whose, you know, has trouble connecting with how he feels.  And what’s great–what I really like, you know, we see a little bit of that in the first movie, LEGO Batman.  We dealt with some of that.

But in this movie, we go even as sort of a step further.  And we see kind of with the aid of her character, we see Batman’s kind of pulled out of himself a little bit.  And she helps him kind of, in a lot of ways, connect with how he feels and his feelings about other people, and certainly romantically as well.  Which is nice.  And I think it’s a different side of Batman than we’ve seen before.

But I’m not in touch with my own feelings.  That was the question? 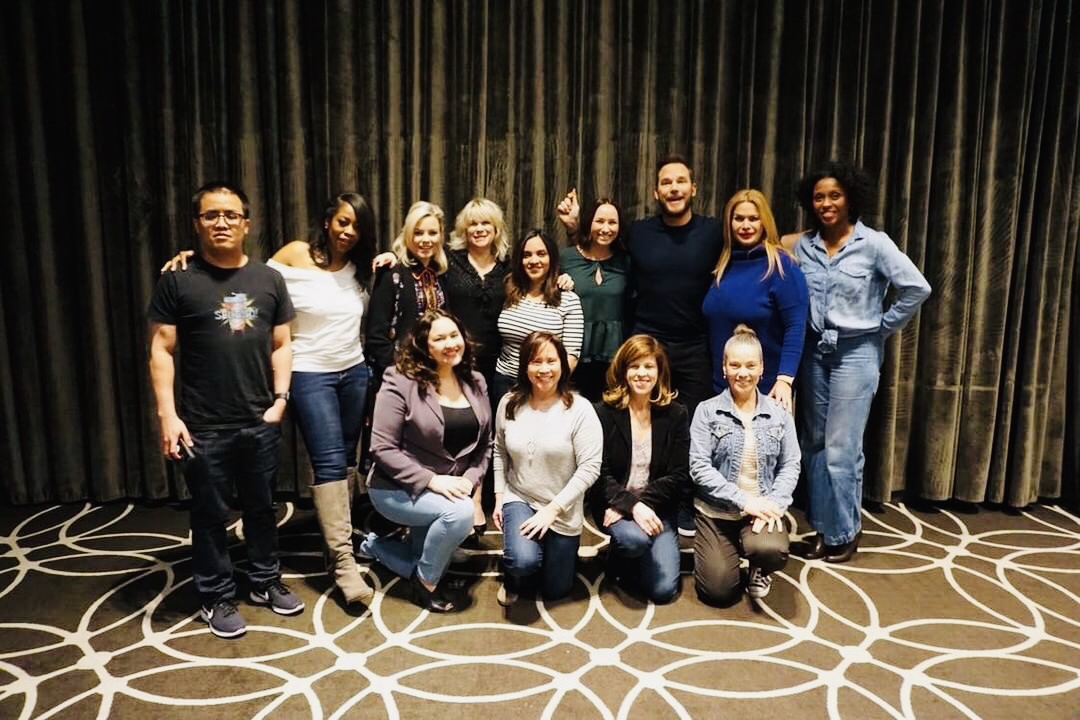 What did you think about Wyldstyle embracing her true hair color in the film and adversity?

Yes. I think one of the interesting things about this movie is Finn, the older brother, via Wyldstyle and Emmet and Rex Dangervest, right? The sort of personalities that he plays in the movie. He’s really trying on a lot of different identities, right. He’s trying to figure out who he is supposed to be, right. He is like, does he need to be tougher? Is he enough? And I think, like the message of the movie, or some of the messages in the movie, is about, like how do you create strategies to kind of combat those doubts, right, in your life.

And I think we all have them. I definitely had them. I definitely went and got a perm, even though I already had curly hair. And I spent like a lot of my hard-earned money on it, and all it did was make my hair even puffier and curlier than what it already was. It was like a totally not interesting thing to do.

But, also, you know, I remember being like, “Am I going to play sports or be a theater person?” It’s like, I like to do both things. But, like for some reason, I felt like I couldn’t–like I had to pick. So, I think part of it is, you know, you don’t always have to pick. Sometimes, you can be like, “Yes, this is the real me. But, today, I wanted to have blonde hair for a while, and I went through my blonde hair phase and I came back around.”

The other thing that’s kind of going on in the movie is like this experimentation and I think Lucy is really pushing him to grow and evolve. She ends up being kind of wrong, but I think that the process that he goes through is a process that’s okay, that’s correct, that we all need.

In the movie, how is your own personality similar or different to the character that you played?

Oh, well, I played two characters in this movie. So, I think there are elements of my personality that really ring through in Emmet Brickowski, just, he’s an optimistic guy, tends to look on the bright side, maybe often times short-sighted in his optimism. So, I think that’s something that’s similar to how I am maybe?

But, then, Rex Dangervest, I think he’s intentionally mined from my career as a bit of a joke; the way that they love to rip jokes from the Zeitgeist. That’s one of this kind of ‘Zietgeisty’ jokes and I thought it was really funny. I’m similar to him, just in the characters that I’ve played, you know, Raptor-training-Guardian-of-the-Galaxy kind of a character, you know, there’s that kind of stuff there. So, that’s an element that is similar as well. 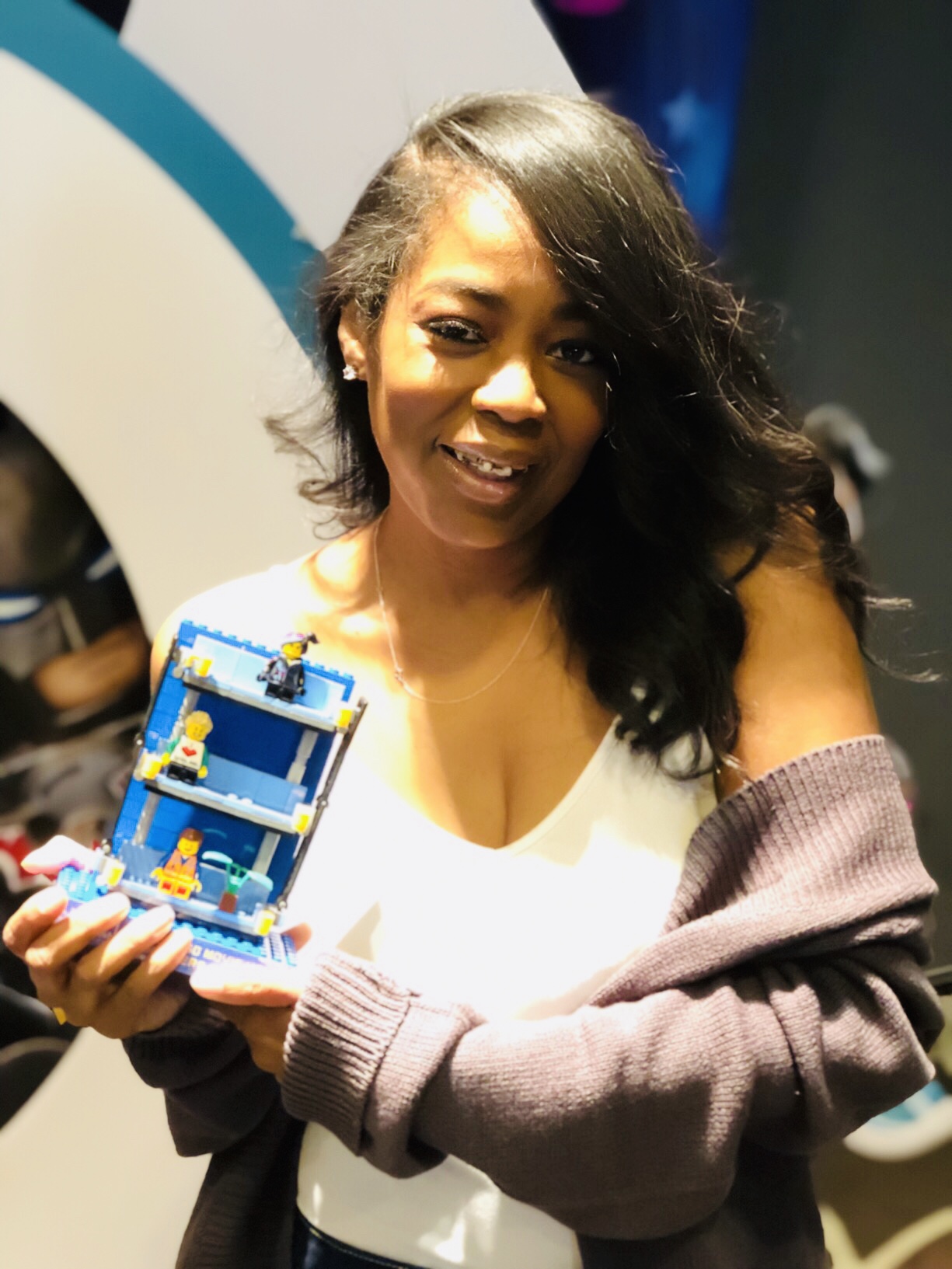 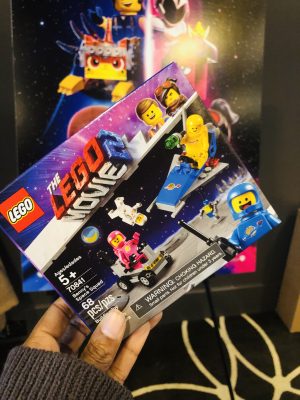 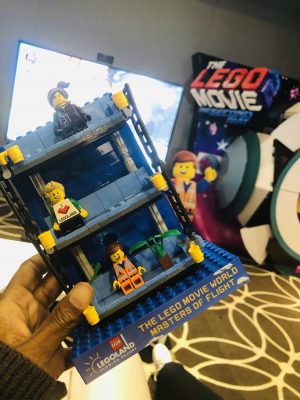 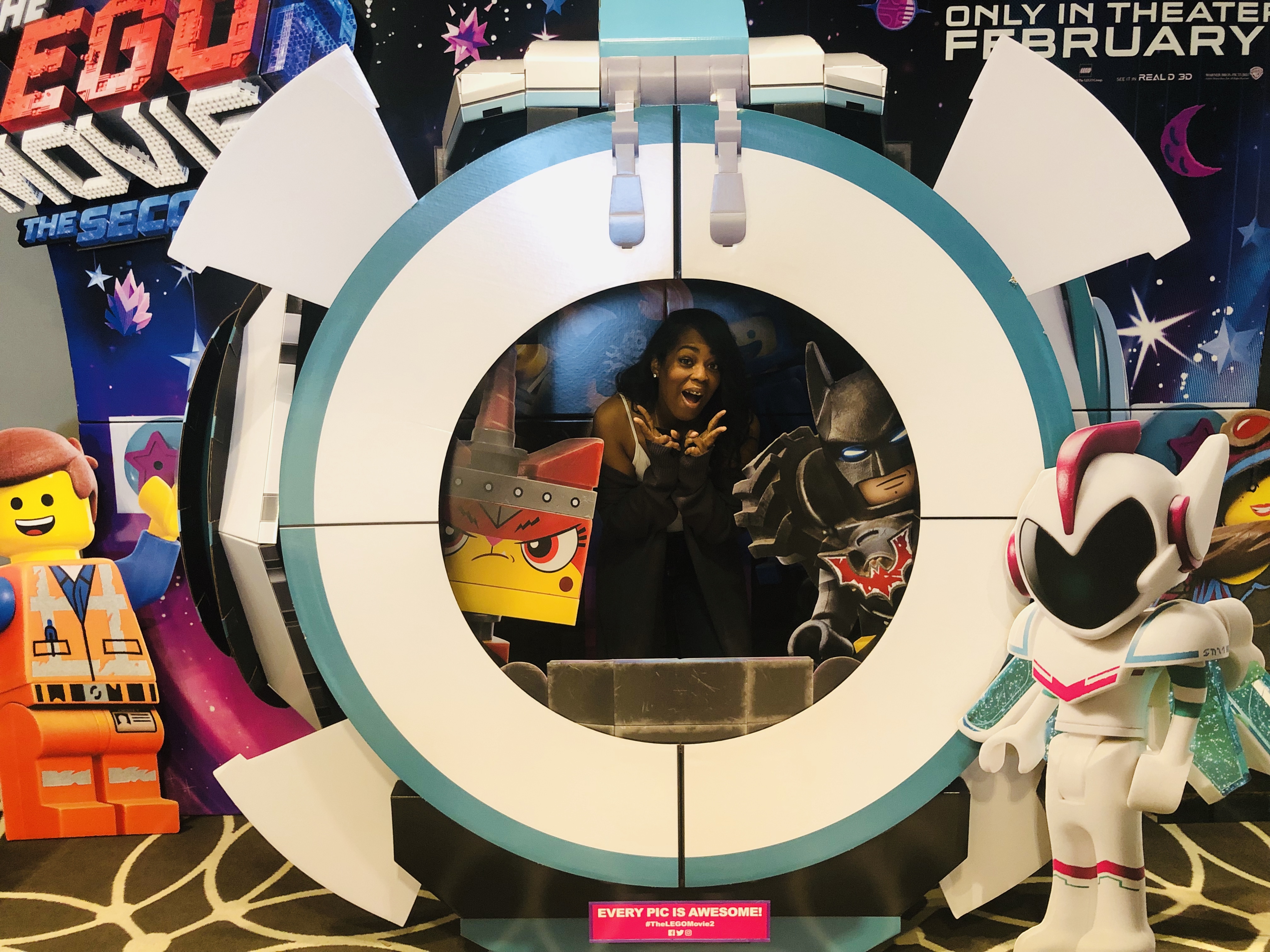 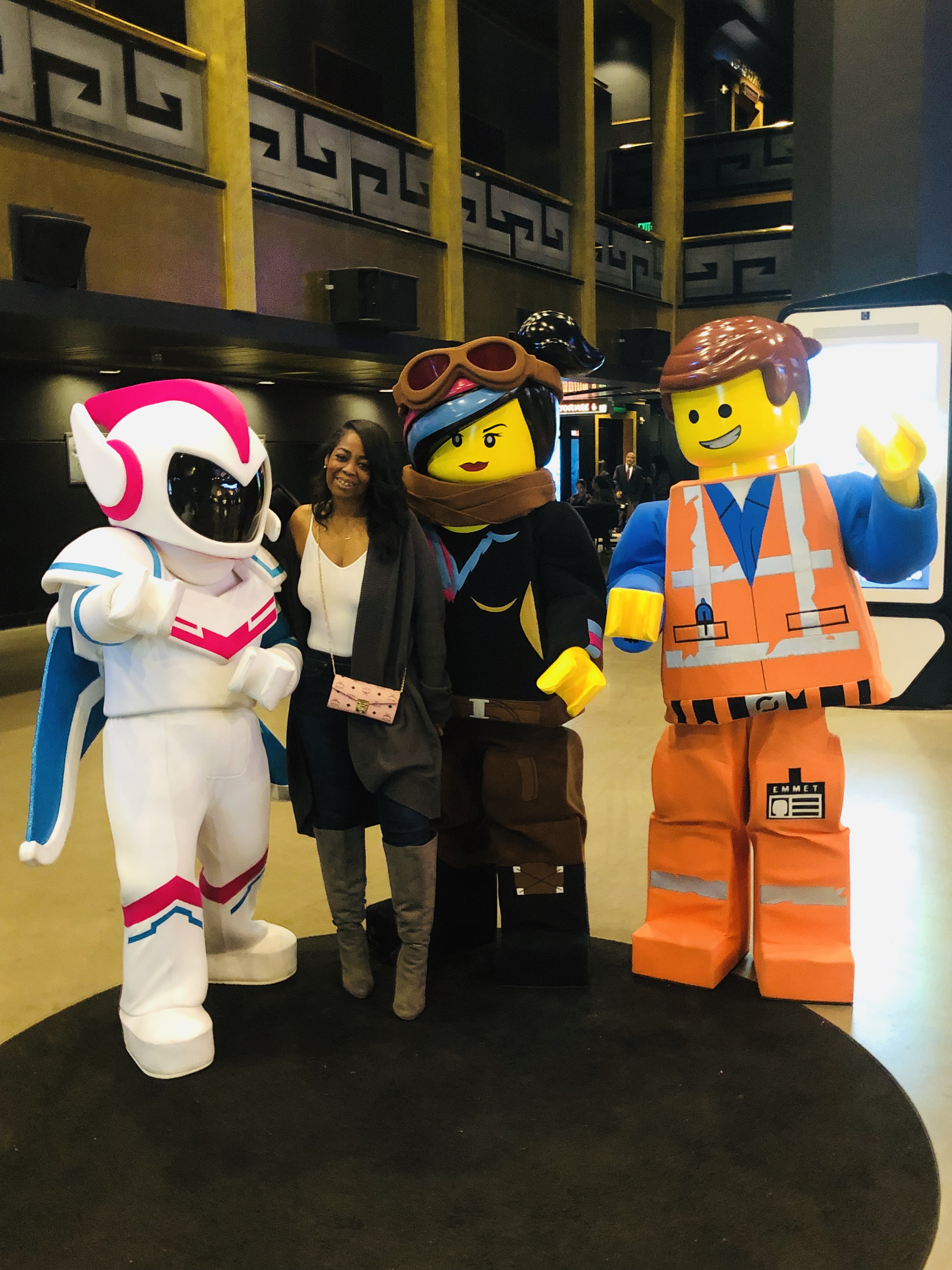 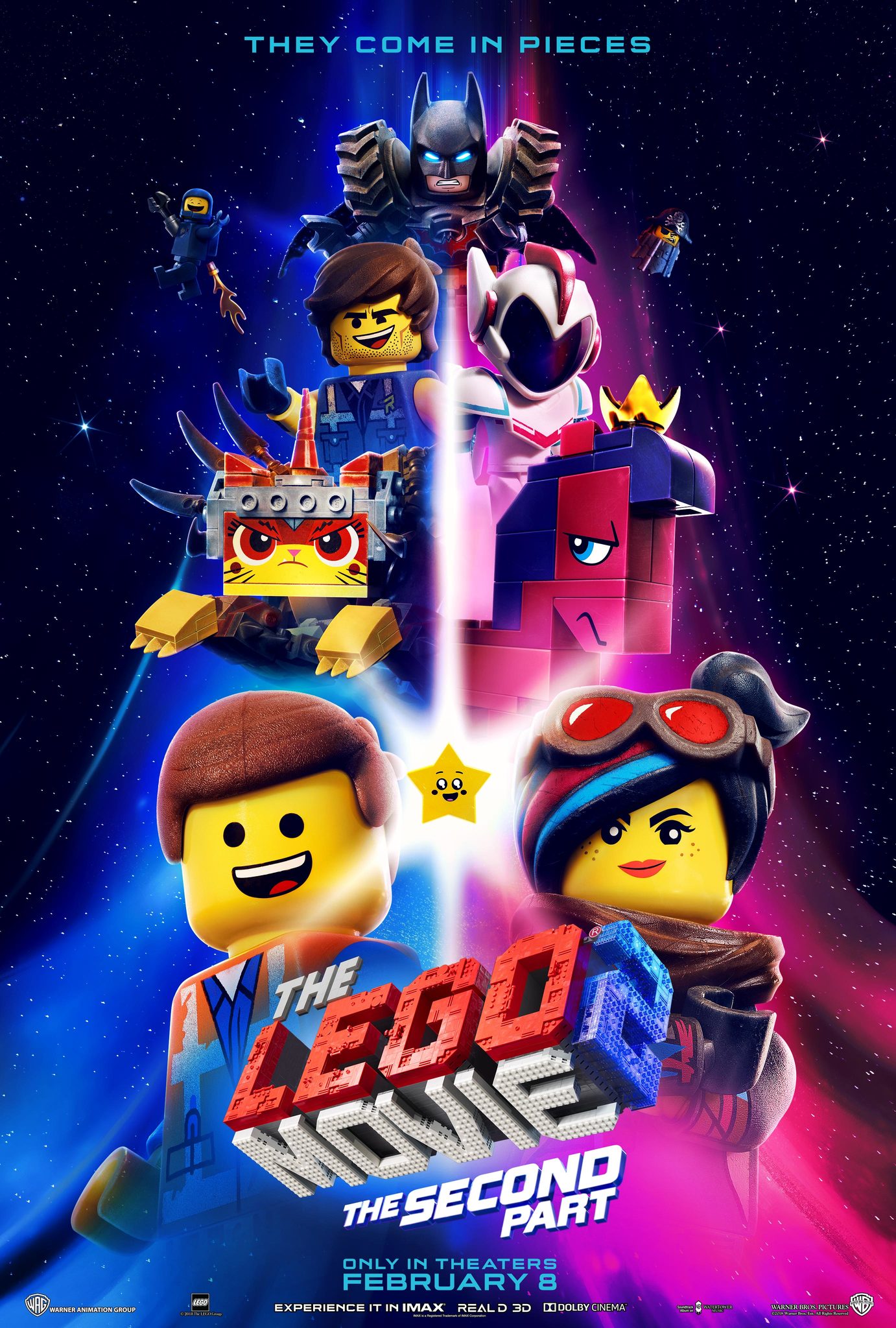 The much-anticipated sequel to the critically acclaimed, global box office phenomenon that started it all, “The LEGO® Movie 2: The Second Part,” reunites the heroes of Bricksburg in an all new action-packed adventure to save their beloved city.  It’s been five years since everything was awesome and the citizens are now facing a huge new threat: LEGO DUPLO® invaders from outer space, wrecking everything faster than it can be rebuilt. The battle to defeat the invaders and restore harmony to the LEGO universe will take Emmet (Chris Pratt), Lucy (Elizabeth Banks), Batman (Will Arnett) and their friends to faraway, unexplored worlds, including a strange galaxy where everything is a musical. It will test their courage, creativity and Master Building skills, and reveal just how special they really are.