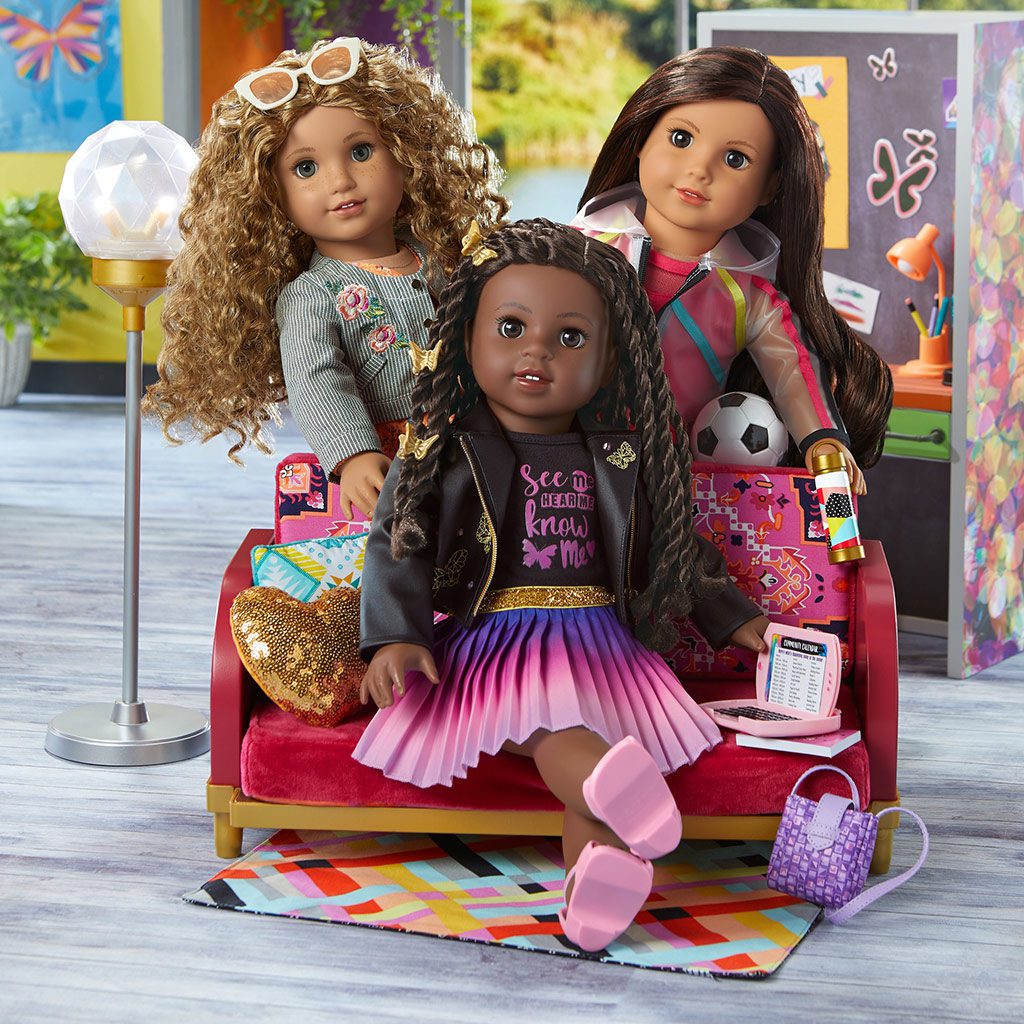 Today, American Girl, a cornerstone in the Mattel (NASDAQ: MAT) portfolio of purposeful brands, introduces a new cast of contemporary characters —Makena Williams™, Evette Peeters™, and Maritza Ochoa™—whose stories reflect several important social issues, including racial equality, environmentalism, and immigration, and the value of working together to create a better world. As told in a unique series of overlapping stories, the three young friends become passionate peers in speaking up for the causes they care about. Shared scenes told from multiple perspectives showcase each girl’s point of view and emphasize the importance of friendship, respect, fairness, and inclusion.

“American Girl was built on diverse and inclusive storytelling—narratives that have empowered an entire generation of girls to stand up for what they believe in with courage, resilience, and kindness,” said Jamie Cygielman, General Manager of American Girl. “We created the new World by Us line to accelerate our progress in diversifying our characters and stories to better reflect what it means to be an American girl today. Through Makena, Evette, and Maritza, as well as future characters to come, we hope our fans learn that they’re never too young to contribute to the larger conversation and help make the world a more inclusive, unified place.”

To bring the World by Us characters to life, American Girl engaged the following acclaimed writers:

To celebrate the debut of World by Us and American Girl’s 35th anniversary, the brand is hosting a special American Girl Fashion Show on Thursday, September 23, 2021, at American Girl Place™ New York and via livestream. Created in partnership with Harlem’s Fashion Row(HFR), the premier design agency that creates a bridge between brands and designers of color in fashion, the show will feature reimagined girl and doll designs for American Girl’s original historical characters—Felicity™, Josefina™, Kirsten™, Addy™, Samantha™, and Molly™—by fashion force Carly Cushnie. Also hitting the runway will be bold, modern-day looks inspired by Makena, Evette, and Maritza created by celebrated HFR designers Nichole Lynel, Samantha Black, and Kristian Lorén.

As part of the event, American Girl is supporting HFR’s nonprofit organization, ICON360, with a $25,000 donation to help raise awareness and funds for the next generation of BIPOC fashion leaders. In addition, American Girl is donating Cushnie’s doll designs to be auctioned by eBay to benefit Girls Who Code and its mission to close the gender gap in technology. The World by Us-inspired doll fashions will be on pre-sale during the event and available for purchase at American Girl retail stores starting March 2022.

“HFR and American Girl understand passion and purpose,” said Brandice Daniel, founder and CEO of Harlem’s Fashion Row. “For our youth today, this partnership is all about possibilities and what it means to stand tall and dream big—no matter your race, culture, gender, or background. I can’t think of a better way to celebrate the amazing potential in every child and inspire them to create positive and lasting change in their neighborhoods, communities, and beyond.”

Kicking off the event is world-famous fashion designer Prabal Gurung, known for embracing diversity, inclusion, and justice in his work. Prabal, who partnered with American Girl on his Spring 2022 show during New York Fashion Week, will introduce the designers and celebrate with fans. Closing out the event is the exclusive premiere of an original World by Us song and dance written and performed by 14-year-old hip-hop artist That Girl Lay Lay. The music video will be available on American Girl’s YouTube and YouTube Kids Channel starting September 27, along with a new stop-motion doll series, featuring the new World by Us characters and other adventures.

Beyond the special event, children’s fashion brand Janie and Jack is debuting three exclusive World by Us-inspired outfits—one for each character—in a first-ever collaboration with American Girl. The Janie and Jack outfits will be available September 24, 2021, at American Girl retail stores in New York, Chicago, Los Angeles, and Dallas, and via americangirl.com and janieandjack.com.