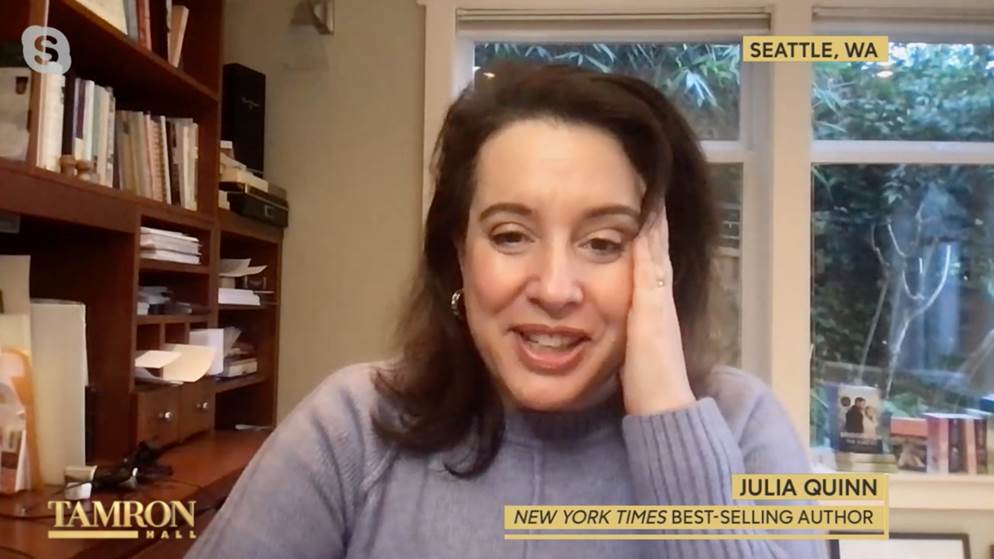 On the Monday, January 25 edition of “Tamron Hall,”  Julia Quinn, author of the best-selling “Bridgerton” books on which the hit Netflix series is based, joins Tamron to talk about the phenomenon around the Shonda Rhimes–produced series that has reportedly been streamed by more than 63 million people. Quinn opened up about how the story went from novel to Netflix and reacts to Rhimes’ decisions on both casting and sex scenes for the TV adaptation.

Quinn on how the book landed at Netflix:

“It came out of nowhere. I was just sitting there as one does, pretending to write in a Starbucks, and my phone rang and it was my agent and he said ‘have you heard of Shonda Rhimes?’ And I just kinda went, ‘uh, yes.’  He said, ‘well I just had the most interesting call.’ I practically fell off the stool cause nobody was adapting romance novels. People will ask me ‘how did you sell it?’ and I’ll say, ‘I didn’t do anything.’ The way I understand it, Shonda ran out of books to read on vacation and somehow stumbled on one of mine and it’s crazy to think that my life is forever changed because Shonda didn’t bring enough reading material on vacation but that’s honestly what happened.”

On how Quinn learned about the diverse casting:

“I think I suspected it from the beginning because this is a Shondaland show and one of the things Shondaland is known for and that I love it for, is the diversity within its shows and so I was curious how they were going to do it because it is a little different bringing this level of diversity and inclusion to a historical piece than it is to say, ‘Grey’s Anatomy,’ but I learned about it when they sent me the list of cast, honestly. In the scripts it wasn’t clear except for the character of Will Mondrich, he was the only one identified in the script by race so I saw the cast and I just thought it was amazing.”

Quinn on her reaction to the sex scenes featured in the show:

“I don’t think that technically the scenes are actually much more intimate or explicit than other stuff we’re seeing on television or in the movies, I think the difference is that it’s being shown from a more female-centric gaze and that makes it feel sexier to us, certainly to us as women, and I think that’s why people are suddenly thinking, ‘Oh, this is so different. This is so sexy.’ But it’s not actually more explicit it’s just, you know, finally we get to look at things the way we want to.”