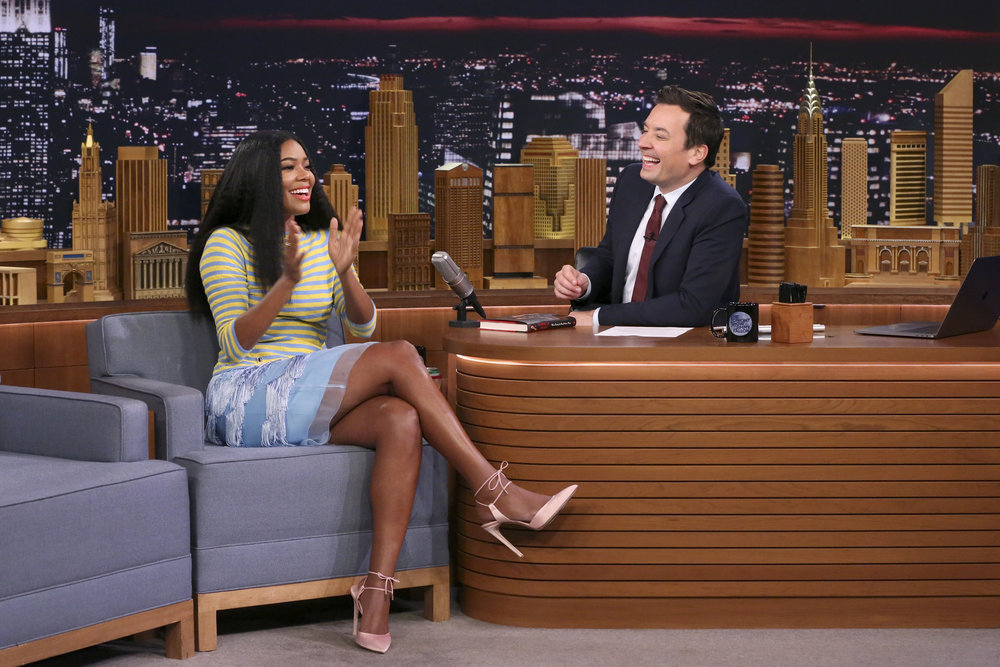 Actress Gabrielle Union made an appearance on THE TONIGHT SHOW STARRING JIMMY FALLON on Friday the 13th. She was so hilarious to chat with. She said that after 4 season, Being Mary Jane was coming to an end. I really loved that show! Gabrielle also shared a stalker story from her collection of essays from her book, We’re Going to Need More Wine before Jimmy and Chef Michael Symon surprised her with some proper Cleveland barbecue in honor of Dwyane Wade’s move to the Cavaliers. I will have to tell Gabrielle where to hang out, shop and get her hair done while in the city next time I see her lol.

Sidenote: I laughed so hard when Gabrielle talked about her stalker who tried to make her life a living hell! I had a very similar story too! I was in high school and I was dating one of the star football players. One day he let me wear his varsity jacket because I was cold. Back in my day, if you wore a boys jacket or jersey that meant you were going together. We were dating but NOT seriously! One girl in my class saw me wearing his jacket and she got really jealous and swore that she was going to beat me up after the football game for NO reason other than just the fact that I was wearing his jacket, go figure!

She and her crew came to the evening football game and as I was cheering, she taunted me the whole time from the stands! What a jealous bitch! I too called my sister who came u there and put an end to that real fast! Hey, I was a lover not a fighter but if I was to see that facially challenged chic now, lawd! Well, actually I did see her on Facebook a few months ago from another friend’s page and she looks like death walking, let me shut up LOL!

Check out Gabby’s video clip inside….