About a month ago, I made my way to Los Angeles for a press junket for an upcoming movie called, Kubo and the Two Strings starring Charlize Theron, Matthew McConaughey and Art Parkinson. We got chance to check out the movie then interview the cast at a private press junket! It was so much fun and I always loved Matthew’s work as an Actor! At the press junket they talked about what made them want to be apart of Kubo and the Two Strings, preparing for the roles and so much more! Check out what they had to say and the movie will hit theaters Friday, August 19th! Great movie for the family, more inside… 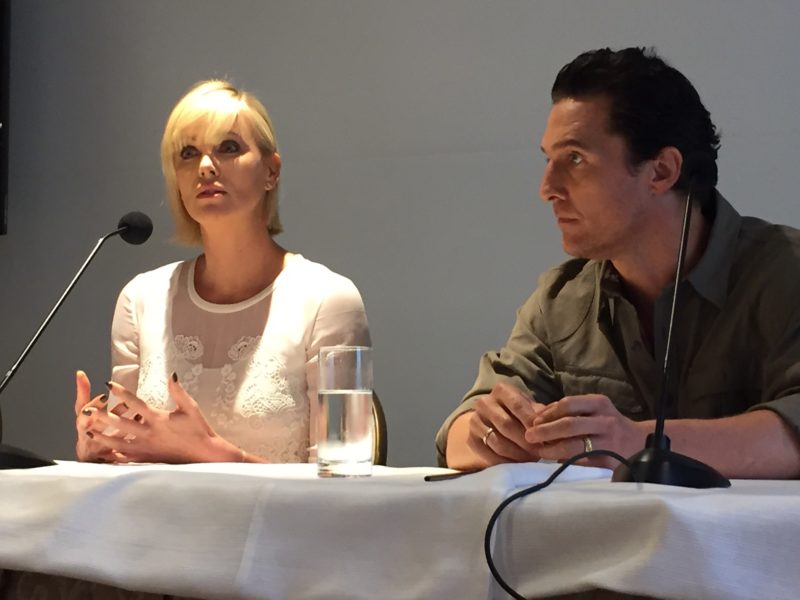 Preparing For Their Roles?

Matthew McConaughey: For me, this was my first animated voice I’ve ever done. I tried to get on quite a few other films but never got it. And I’d just had children, so with three kids, a lot of my friends were like asking them, so what’s your favorite movie your dad did? And they’re like, well, we’ve never seen any of ‘em.” I haven’t made any films in about 10 years that they could see. So I was looking for something and I think Travis heard some interview I did on NPR, and they reached out after that and, what’d I do for preparation? I didn’t try too hard to prepare for anything, it was there in the script. We just started creating on the day and then we’d talk with Travis and say, how do you like this, how do you like that, and we were off.

Art Parkinson: For every project I do, me and my mum do a lot of work together, sort of, in post-production, whether it be looking over the script and reading over the script together, and then the night before, really studying the character and talking about the different ways that we can portray the character. Travis also helped a lot because he’s such a down to earth person so he’s easy to talk to. So there’s never sort of shy away from throwing in an idea, and Travis was always very encouraging in the ways that I wanted to portray the character. He always had the little Kubo sculpture set up so that also made it very easy to prepare.

Charlize Theron: I’ve always joked that my kids would have to be 52 before they could see anything I’ve been in. So it’s nice that that now has changed. Yeah, I mean, there was such a constant conversation, the process was really laid back and very relaxing and I loved it, ‘cause I had never done a voice either, other than to my son sometimes when I read and he would always say, “Don’t do that! You sound weird.” Dude, I’m doing a Russian accent, like this is cool. So you know, I was nervous too because I didn’t really know the process but the process is very relaxed, and very much like other films. You know, it’s really kind of coming back to the core and the foundation of storytelling and Travis was really encouraging of keeping things very grounded and very real, and so I felt comfortable with that.

Ad-libbing In The Movie?

Charlize Theron: “Oh. Yeah. Travis is, by the way, one of the kindest people you’ll ever meet. He’s just very consistent in who he is and very warm, very encouraging. He gave us all ownership in this and he has a real understanding that we wanted to kind of step into these bodies and become and live in this and the only way you can really do that is to know that the sky is the limit, there’s not any kind of hard lines for you to kind of be in. And he so very much did that.”

Matthew McConaughey: “They have enough voiceover for three more movies from the stuff I gave him. That was it. I like to walk in and say, ‘Press record. And then don’t press stop for the next 12 hours, or however long it is,’ and come back in and find it. So that was part of the fun and for me that’s just—Charlize says sky’s the limit. It was a fun process. It was supposed to be fun, and you can’t really screw up you know. And if you do, it’s just tape. So yeah, I played around a lot, and I liked doing that.”

Art Parkinson: “Yeah, I thought that if I had any ideas about extra lines or things I wanted to add, I always just mentioned it to Travis and asked him if we could do a take with these extra lines, and he was always very supportive of it. Like with Matthew and Charlize, he always let us sort of bring the characters to life ourselves and he sort of gave us the instruments to do so, though. You know what I mean? So yeah, he was very, very supportive and it was always very fun.

What Made You Take On The Kubo Project?

Charlize Theron: I in general love directness. I was raised with a lot of directness. And I think in storytelling we sometimes forget that with children, and there was something about this that was just so clear, and I love that. As far as taste goes, I like that there’s nothing about this that kind of shies away from very, very real issues and I think at the end of the day that makes it very powerful and refreshing because we don’t see a lot of that. I was very excited to be a part of that.

Matthew McConaughey: There’s something LAIKA seems to do with all their projects. They don’t really pander down to the age group. They deal with adult themes in a way that’s digestible for kids. There’s always a good moral to the story, that’s learned in the middle of the adventure. I liked their previous work and this script had all that. 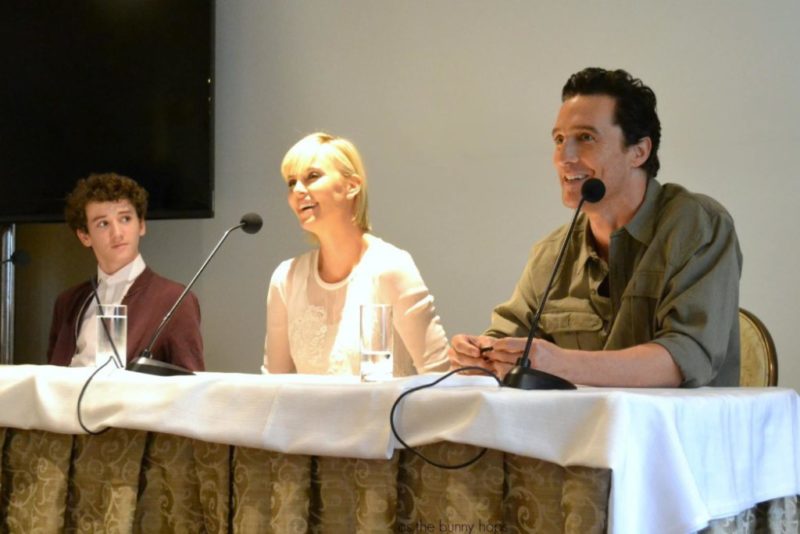 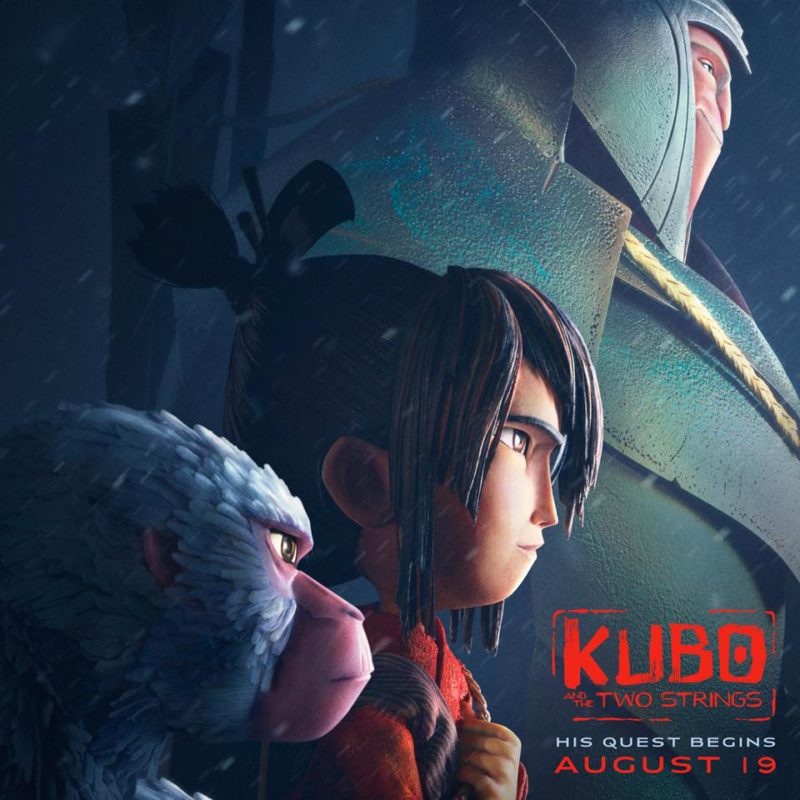 An epic action-adventure from acclaimed animation studio LAIKA. Clever, kindhearted Kubo (voiced by Art Parkinson of “Game of Thrones”) ekes out a humble living, telling stories to the people of his seaside town including Hosato (George Takei), Hashi (Cary-Hiroyuki Tagawa), and Kameyo (Academy Award nominee Brenda Vaccaro). But his relatively quiet existence is shattered when he accidentally summons a spirit from his past which storms down from the heavens to enforce an age-old vendetta. Now on the run, Kubo joins forces with Monkey (Academy Award winner Charlize Theron) and Beetle (Academy Award winner Matthew McConaughey), and sets out on a thrilling quest to save his family and solve the mystery of his fallen father, the greatest samurai warrior the world has ever known. With the help of his shamisen – a magical musical instrument – Kubo must battle gods and monsters, including the vengeful Moon King (Academy Award nominee Ralph Fiennes) and the evil twin Sisters (Academy Award nominee Rooney Mara), to unlock the secret of his legacy, reunite his family, and fulfill his heroic destiny.

KUBO AND THE TWO STRINGS OPENS IN THEATERS EVERYWHERE ON FRIDAY, AUGUST 19, 2016.