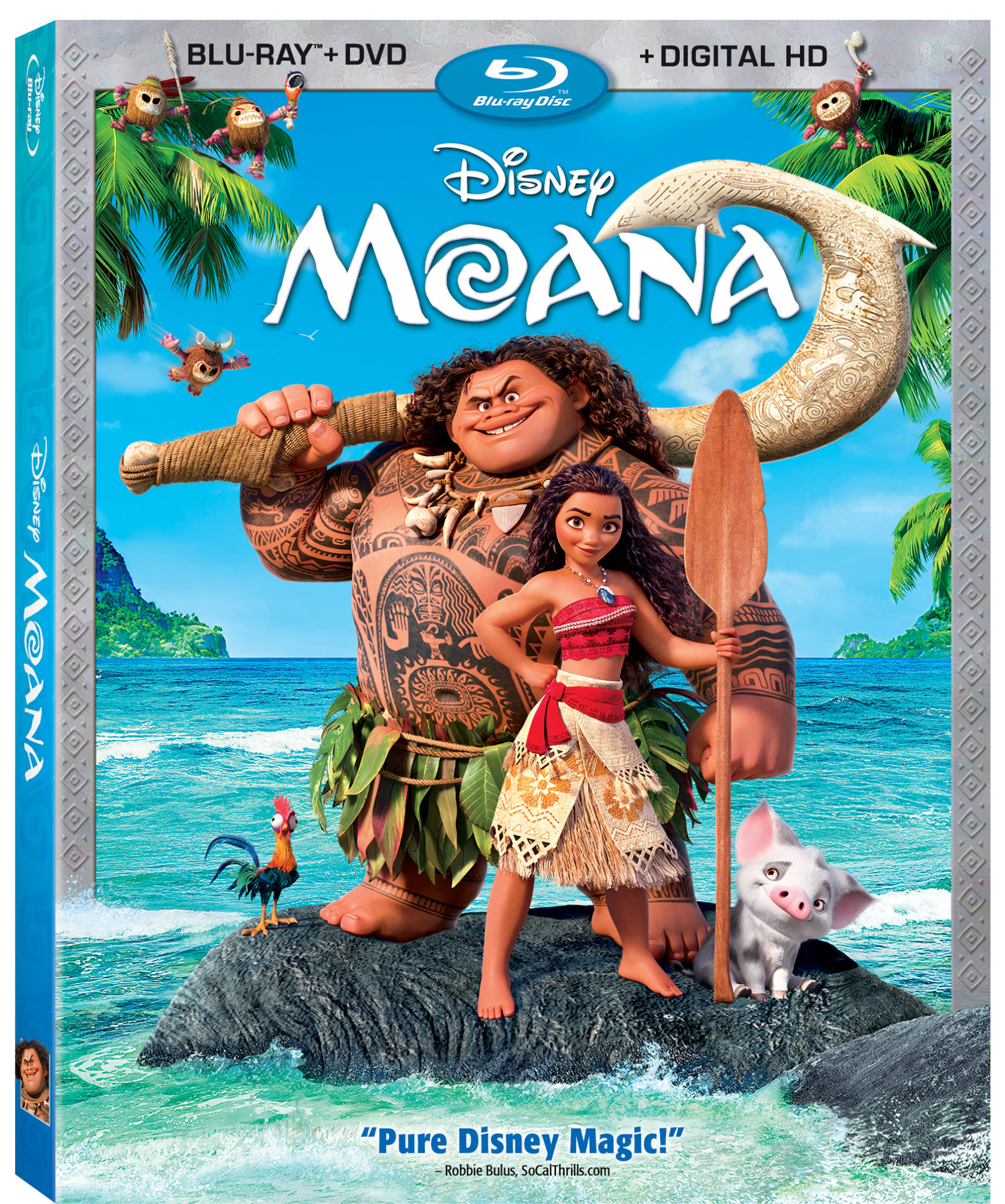 Did you guys get a chance to check out the amazing movie Moana last year when it hit theaters? Well, if you missed it, guess what? It just launched on Blu-Ray today! I am here on a press trip in Los Angeles and had the pleasure of seeing a few scenes from the dvd that’s really impressive and I must say, it took my breath away because I learned EVEN more about this amazing film! From learning about how Disney traveled to the Pacific to learn about the Polynesian culture, intense interviews with the elders and community, the costume designs, and so much more! I loved the storylline they told about Moana and having teens myself, I could definitely relate to her personality and being true to herself, more inside…

According to directors Ron Clements and John Musker, the story of “Moana” was inspired by the great explorers who masterfully navigated the vast Pacific, discovering the many islands of Oceania. “Voyaging is a real source of pride for many Pacific Islanders, a part of their identity,” says Clements. Many experts believe that about 3,000 years ago, those deep-sea exploratory voyages halted for about a millennium before resuming. This rebirth of exploration sparked the filmmakers’ imaginations, and the heroine at the heart of the story. “The idea of a teenage girl who dreamed of becoming a navigator—considering the abilities of her ancestors—was so appealing,” explains Musker. Moana’s quest to become a wayfinder also serves as a journey of self-discovery, empowering her to find her own identity – a beautiful and powerful message for audiences of all ages and genders.

Blu-ray 3D, Blu-ray & Digital 3D/HD/SD:
Theatrical Short Film: “Inner Workings” – With introduction by the filmmakers, is the story of the internal struggle between a man’s pragmatic, logical side and his free-spirited, adventurous half. Created by a small team at Walt Disney Animation Studios in a unique, fast-paced style that blends CG and traditional hand-drawn animation, the short explores the importance of finding balance in daily life.

Maui Mini-Movie: “Gone Fishing” – When Maui decides it’s time to take charge of the ocean and catch his next meal, Moana must show him the error of his ways … with a little help from her friends!

Voice of the Islands – An in-depth look at how Pacific Island people and cultures inspired the filmmakers to create the story of “Moana.”

Things You Didn’t Know About …
Meet the stars of “Moana” in this dynamic Q&A featuring Dwayne Johnson, newcomer Auli‘i Cravalho, and famed animation directors Ron and John.
Meet the musical team behind “Moana” in this fascinating Q&A featuring Opetaia Foa‘i, Mark Mancina and Lin-Manuel Miranda.
Island Fashion – Find out how costume designer Neysa Bové took on the unique challenge of creating costumes using materials and techniques native to the islands of Oceania.
They Know the Way: Making the Music of “Moana” – Musicians Opetaia Foa‘I, Marc Mancina and Lin-Manuel Miranda take us on a personal journey through their involvement in the movie and how it changed their lives.
Fishing for Easter Eggs – Dive deep into the ocean and fish for the Easter Eggs hidden by the animators at Walt Disney Animation Studios.

The Elements of … – This series of four mini-docs explores the technical achievements behind some of the ground-breaking effects used in the film.
Mini Maui – Meet “Mini Maui,” Maui’s tattoo sidekick. Animated by legendary hand-drawn animator Eric Goldberg, we explore how the 2D world collides with CG animation to bring the demigod’s tattoos to life.
Water – In the movie, the ocean is a character. This piece explores how the water is given a personality, along with the technical feats of creating a believable ocean landscape farther than the eye can see.
Lava – Te Kā is a creature made of lava, smoke and fire. This piece dives into the challenges of making an animated creature of massive scale brought to fiery life by character, technical and effects animators.
Hair – One of the greatest technical achievements of the film was the animation of the beautiful, curly hair on Moana and Maui. Take a look at the hair-raising detail that goes into animating each strand, adding performance to the movie that has never been seen before.
Deleted Song: “Warrior Face” – With introduction by songwriter Lin-Manuel Miranda.
Deleted Scenes – Ron and John introduce the following deleted scenes: Race the Wind/Ties that Bind; Discussing Moana’s Future; Under the Sea; Grandmother’s Warning/Legend of Maui; Education of Moana; Father, Daughter, Boat; and Canoe Race.
Music Video: “How Far I’ll Go” – Performed by Alessia Cara.
“How Far I’ll Go Around the World” – Multi-language reel of the song “How Far I’ll Go.”
Audio Commentary – With directors Ron and John.