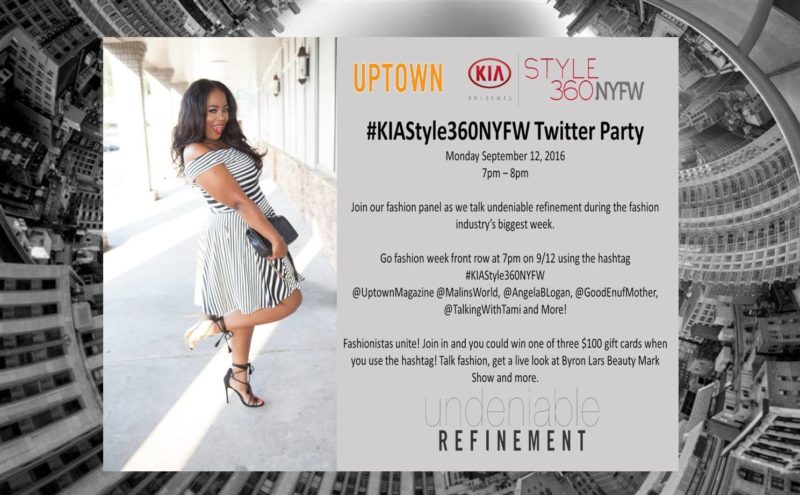 Join myself and a great group of fashionistas and style experts for an online hour long Twitter Party which will include style conversations, fashion tips and a celebration of all things fashion.
In addition to some great fashion talk there will be prizes awarded! You can win one of three $100 gift cards to go get your shopping on!
Plus, be treated to an exclusive look from the Byron Lars Beauty Mark Show! We will be sharing looks from his New York Fashion Week show live!

Additional Hosts: @AngelaBLogan @MalinsWorld @GoodEnufMother @TalkingWithTami @AudreyMcClellan
Want to get a jump start on winning great prizes before the party? Pre-tweet to Win! Anyone who follows @UptownMagazine and tweets the below statement from now until the #KiaStyle360NYFW Twitter Party on Monday September 12, 2016 at 7pm EST will be eligible to win a $25 Gift Card.

WHAT IS THE UPTOWN + #KiaStyle360NYFW SOCIAL MEDIA EVENT
UPTOWNMagazine.com and Kia Motors have come together to celebrate undeniable refinement and the fashion industry’s biggest week; New York Fashion Week. UPTOWN is hosting the #KiaStyle360NYFW Twitter Event on Monday September 12, 2016 at 7pm EST where leading fashion influencers will join us providing fashion tips and advice while engaging in a great conversation about style and undeniable refinement.

WHO SHOULD I BE FOLLOWING ON SOCIAL MEDIA RELATIVE TO THE #KiaStyle360NYFW Twitter Party?
@UptownMagazine
@Kia

DO YOU HAVE TO OWN A KIA VEHICLE TO PARTICIPATE OR TO WIN PRIZES?
No! But your level of awesome is going to seriously go up if you do. You can also find out more information about the redesigned Kia including the Kia Cadenza at Kia.com.

HOW OLD DO YOU HAVE TO BE TO ENTER THE #KiaStyle360NYFW TWITTER CONTEST?
Must be 18 years or older to enter.

HOW MANY TIMES CAN I ENTER THE #KiaStyle360NYFW CONTEST?
You may submit as many entries as you wish by tweeting with us between 7pm – 8pm EST on Monday September 12, 2016. All entries must contain the hashtag #KiaStyle360NYFW follow along with @UptownMagazine on Twitter to interact with us, answer fashion questions, get fashion tips and advice and see photos from the Byron Lars Beauty Mark New York Fashion Week Show.