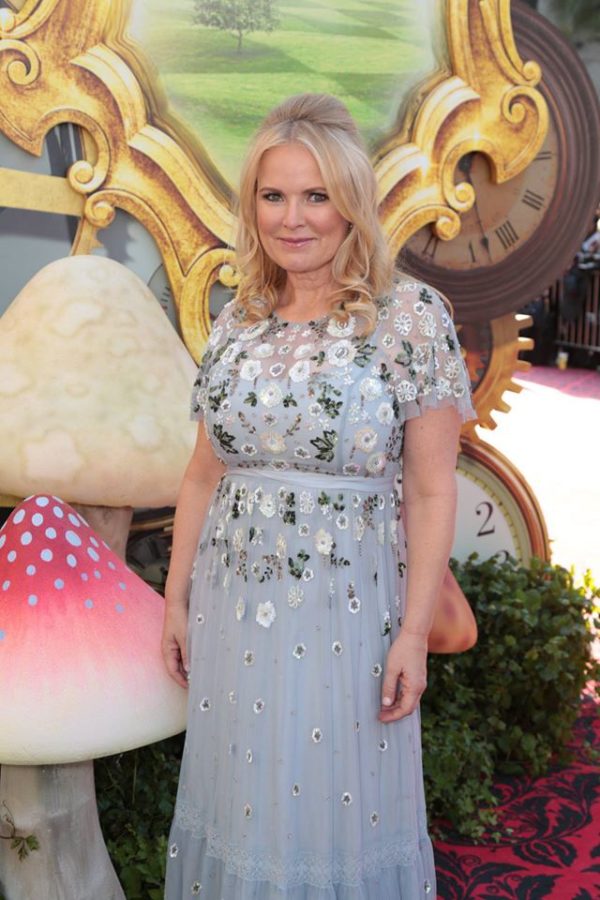 Ever wanted to know what is was like to be a HUGE Hollywood Producer? Well, while out in Los Angeles, us Disney bloggers got a chance to interview Suzanne Todd who produced the latest movie, Disney Alice Through The Looking Glass! She was so much fun to talk to and she shared with us her experiences, being a working single mom and so much more. Step inside to read all about it… 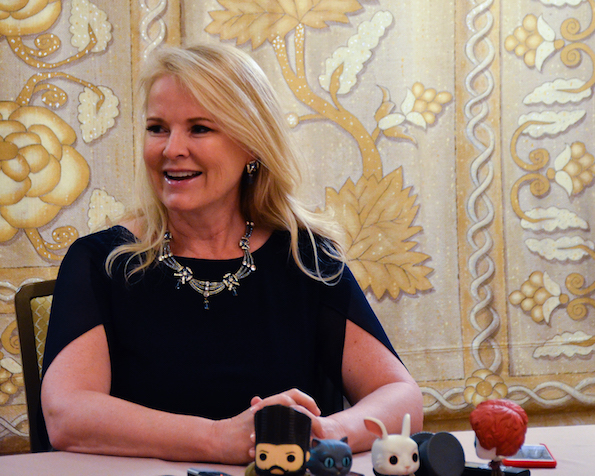 On time management, family and more…

I’ve been divorced for seven years and I have my kids 100% of the time. I found over the years that it’s important to have time for the three of them together with me, family time, but also to have individual time with them. But my schedule is always crazy. I use Google calendar and everybody has a color. I always joke and say it’s like a war operation of moving people around.
I have to say, when we were shooting in London, it was so far away that I just picked them up and and they came with me for the whole time. We were so spoiled. They were my prisoners, you know? [laughs] We would wake up in the morning and we would all go to the studio together.
I’d take the crew call in the morning and they each had a classroom where they would go and do their schoolwork with a tutor, then we’d have lunch together. By the time we wrapped we’d have dinner and watch dailies and go home. They were in my clutches! They weren’t going off with their friends of going to their softball games, so that was super fun for me.

Making The Sequel To Alice In Wonderland?

We built big sets on the second one, and getting the cast together was much harder on the second one because they’ve all continued to have like flourishing, amazing careers and have won an Oscar since then and how they’ve done so many amazing things and Johnny’s always booked. On the first movie, the really interesting thing about the casting process is that normally when you’re casting a movie, you go through the script and you make lists of the characters, and then there’s about 20 actors on a list, and you go one by one and you offer it to them. On the first Alice, Tim (Burton) literally just picked the people he wanted, and called them. And every single person said yes. There was one character where he picked somebody and she said yes, and then she had dates issues and so then we had moved on to somebody else, but everybody wanted to do it because they just wanted to obviously work with Tim and they loved the script. So the second time, obviously, we knew who most of the actors were going to be, but scheduling was very difficult.

It probably took us almost another year to really get started, to get all the actors when they could work at the same time. And even then you talk about the scheduling with the three kids, imagine with the actors because it wasn’t like we have all the actors for the three months we need them. We have Johnny for these days here, etc. It’s all like a very complicated jigsaw puzzle.

The message she wanted to give for all the moms out there.

I’m learning every day just like the rest of you. I think however many years it is down the road for me now, I know it sounds like an Instagram saying, but I definitely sweat the small stuff less and I feel like in my old life, I definitely sweated it more. And maybe that’s just because I don’t have time for it, or the energy for it, but situations, people, things that bring drama and conflict and aren’t productive moving forward things, I really stay away from or avoid or I will cross the street to get away from.

That’s very different for me than I was probably 10 years ago or 15 years ago. I’m very, very focused on what I think will be a positive outcome, and it’s something I actually talk about a lot with my kids, and stuff that comes up for them, because I always think the best advice I can ever give myself is the advice I tell my kids, because I’m much better at telling my kids what to do usually than I am at telling myself. So if I pause and think about what I would tell them, then I usually do a better job, but that idea of trying to avoid the stuff that actually isn’t helping you get where you need to go, including sometimes your own thought process about it, like having like negative thoughts inside or telling yourself that something is harder than it really is, because it’s not really helping you.

When we’d started with him (Sacha) , I thought one of the funniest things was how Sasha talked about how when he’s developing his character that the costume is really, really important for him. Sasha played so many interesting characters before that there was certain things he wanted to stay away from, like he didn’t want to do anything he had done before, so then it was kind of this process of elimination, but the one thing he really, really wanted to do was wear tights which I thought was so funny, and I didn’t totally understand it, but I went to the first costume fitting and I saw him in the tights.

And it was like, of course, because his legs are ridiculous. He has two spider legs, literally his thigh is the same size as his angle, which if you look closely in the movie, you’ll see, but I love that Sasha understood the ridiculousness, the skinniness of his legs, and that’s why he wanted those little pantaloons with the tights. Then you know under that big hat, he has what we call a man bun.

The there was Johnny, obviously we weren’t inventing a new character, but it was so, so amazing. It wasn’t something I was thinking about the first day that Johnny was working and he came and gone through the makeup and the wig and the contacts and everything and we were doing a scene and I just remember the first time he opened his mouth and spoke, I got tears in my eyes, because it was like seeing the Hatter again.
It had been so many years in between, and Johnny, as you guys saw in the movie, is so gifted and just bringing vulnerability to the Hatter, even behind all of the craziness. He’s such a talented actor and it was just so sweet, it was like seeing an old friend that I hadn’t seen for so long. 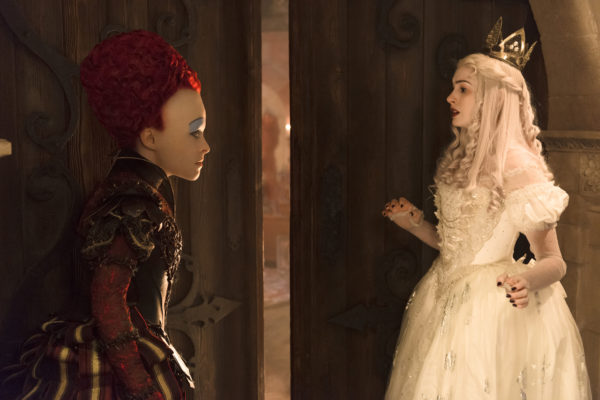 Favorite scene in the film?

There’s sort of a running joke from the two movies, because I work sometimes with my younger sister who happens to have red hair, so in the first movie, there was always kind of joke to the writer, you know, this sort of Red Queen, White Queen sort of joke, not that the White Queen is the good one and Red Queen is the bad one. Although you may have thought that in the first movie, certainly in the second movie, you get to see it. There is something about that sister story line because I have two sisters, so that’s very special for me.

Also, when you look at the young White Queen, the idea that she’s not a bad person. I think all of us, my kids for sure, have behaved that way. I behaved that way when I was a kid. When you just make a mistake you feel like you’re on the spot and say the wrong thing like she did and then you see in the movie the trajectory of everything that happened because of that. I love that scene at the end where they have a little tiny bit of reconciliation, although we’ll see how long that lasts, if we make another movie. 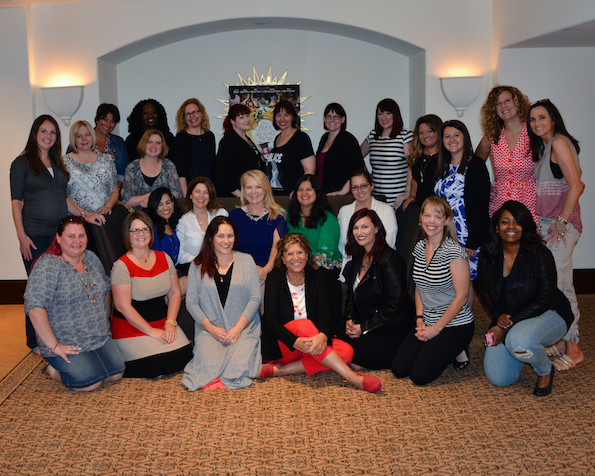