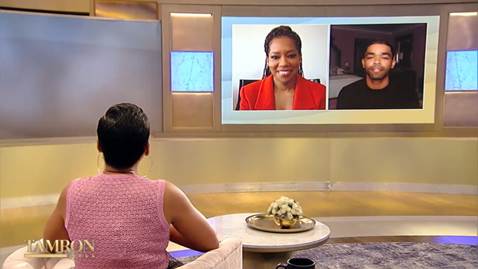 On the Friday, January 15 edition of “Tamron Hall,” Academy Award-winning actor Regina King celebrates her 50th birthday and discusses her new film, “One Night in Miami.” King is joined byKingsley Ben-Adir (“High Fidelity”), who recently won the Breakthrough Actor Award from Gotham Independent Film Awards for his performance as Malcolm X in the project. Ben-Adir shares his reaction to receiving the award and discusses working with King and his experience playing the roles of Malcolm X and Barack Obama.

“I mean, it feels like being 49 or 48 or 47 or 22. You know I’m grateful for the wisdom I’ve picked up along the way. I’m grateful that I’ve been able to apply some of it, and you know honestly, you know Tamron, you can relate to this as well, you don’t really feel much different as far as physically until, you know, you twist your ankle or something like that then your like, ‘Oh, this is going to take a little bit longer to heal.’”

King on why she doesn’t mind working on her birthday:

“I have to tell you, for the past almost 15 years of my life, I have worked every day on my birthday. And I just kind of feel like the universe has really looked after me all of these years so, you know, it’s not broke so don’t try to fix it. We’ll keep this up. On my 100th birthday…”

King on if she gets nervous, despite her past successes, when working on new projects:

“I do get nervous, I get nervous before every single project, whether I’m acting, or directing. And I think that it’s a good thing. I feel like I would be more concerned if I didn’t get nervous, because when I’m nervous I know that it means something to me, that it is special and precious to me.”

Ben-Adir on being honored with a Gotham Award for his performance in “One Night in Miami”:

“My God, I was so surprised man. I hadn’t put it to the back of my mind, I had put it out of my mind. I was just so pleased just to be nominated. I’ve never been nominated for anything in my life. So when they said my name I was, I was so thrown and had drunk a little bit too much champagne so it was really genuinely the most surprised I’ve ever been in my life.”

Ben-Adir on playing the roles of Malcolm X and Barack Obama for separate projects at the same time:

“It’s one of those ones where, you know, I’ve been auditioning, and dreaming about in one day – maybe if I’m lucky I’ll have an opportunity to play a character [who] is deeply sort of rich and complex as Malcolm and, you know, it just so happened that two of them came at the same time and these are two huge opportunities and you just have to throw everything you’ve got at both of them because the way Regina allowed us to play and explore together meant the making of this movie was really like an extended rehearsal, it was just complete exploration.”