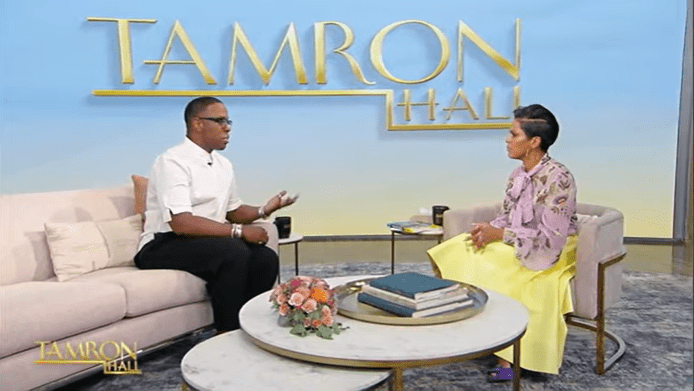 On today’s “Tamron Hall,” the nationally syndicated daytime talk show dedicated a special hour to discussing “the root of it all” – the stigmas and the tangled feelings so many have surrounding their hair. Guests included Tamron’s personal hair stylist and hair stylist to the stars including former First Lady Michelle Obama, Johnny Wright, who shared the inspiration behind his new book “Natural & Curly Hair For Dummies” and shares his stance on whether or not people should relax their hair or keep it natural, Dr. Uchenna R. Okereke, a dermatologist who specializes in hair loss, beauty and style consultant Blake Newby and women who are exploring their own hair journey.

Johnny Wright shares his take on the debate over natural or treated hair:

“There are almost 8 billion people on this universe. And with that, we have a rainbow of personalities and you should be able to express yourself however you want. And my book is not about shaming anyone that does relaxers, my book is about giving people options, right? So if you want to transition if you want to try the natural hair thing out, this book will guide you but at the end of the day, my book is really about healthy hair period, that healthy hair period.” He continued, “You could change it up and do whatever you want. I always tell people a person’s hair is the first thing you hear before they speak. It tells you a lot about their personality before they utter a word. If they’re sassy, if they’re conservative, if they’re edgy, if they’re sexy. Whatever it is, I feel that I am a storyteller because hair is the part of the illustration of your story, right? And so being able to sculpt and style your hair the way that you want to speak and communicate with people is definitely a luxury.”

Johnny Wright on teaching children how to be confident in their hair:

“You know, finding dolls that represent them, you know, their complexion, their hair texture. There’s so many more things out there on the market that you can do that now. Back in the day, the Barbies were all white, right? But now you can have those dolls and they can say, oh, it looks like me. And you see “The Little Mermaid” [Halle Bailey] and that’s why it’s so important to have that representation because…looks like me, and you could talk about that with your child and get them more comfortable with themselves”

“We still don’t really know. So the study that came out that’s, you know, gotten a lot of press and last week, it really looked at whether hair products – if there was an association with hair product use and the development of uterine cancer in women and what they found was that in the Black women that were in this study, they had an increased risk of developing uterine cancer if they had ever used chemical relaxers in their life…Now if they use it frequently, which the state defined as more than four or more times per year, they had a two-fold increased risk of developing uterine cancer. Okay, so already uterine cancer is a common cancer, gynecological cancer in the United States and Black women, we’re at risk for developing it anyway. So the question really is,  are we putting ourselves in a situation whereby we’re making ourselves more likely to have this outcome? We don’t know this yet. Now, to be honest, this is just one study, okay? We’re not going to hang our hat on this. And there were several limitations to this study. Number one, all of the participants were women whose sister had a history of breast cancer. So again, I mean, that really is a narrow scope. Okay, so let’s just be clear on that. Additionally, they did not look at the duration of use, so whether you use it for ten, twenty, thirty, forty, fifty years…”