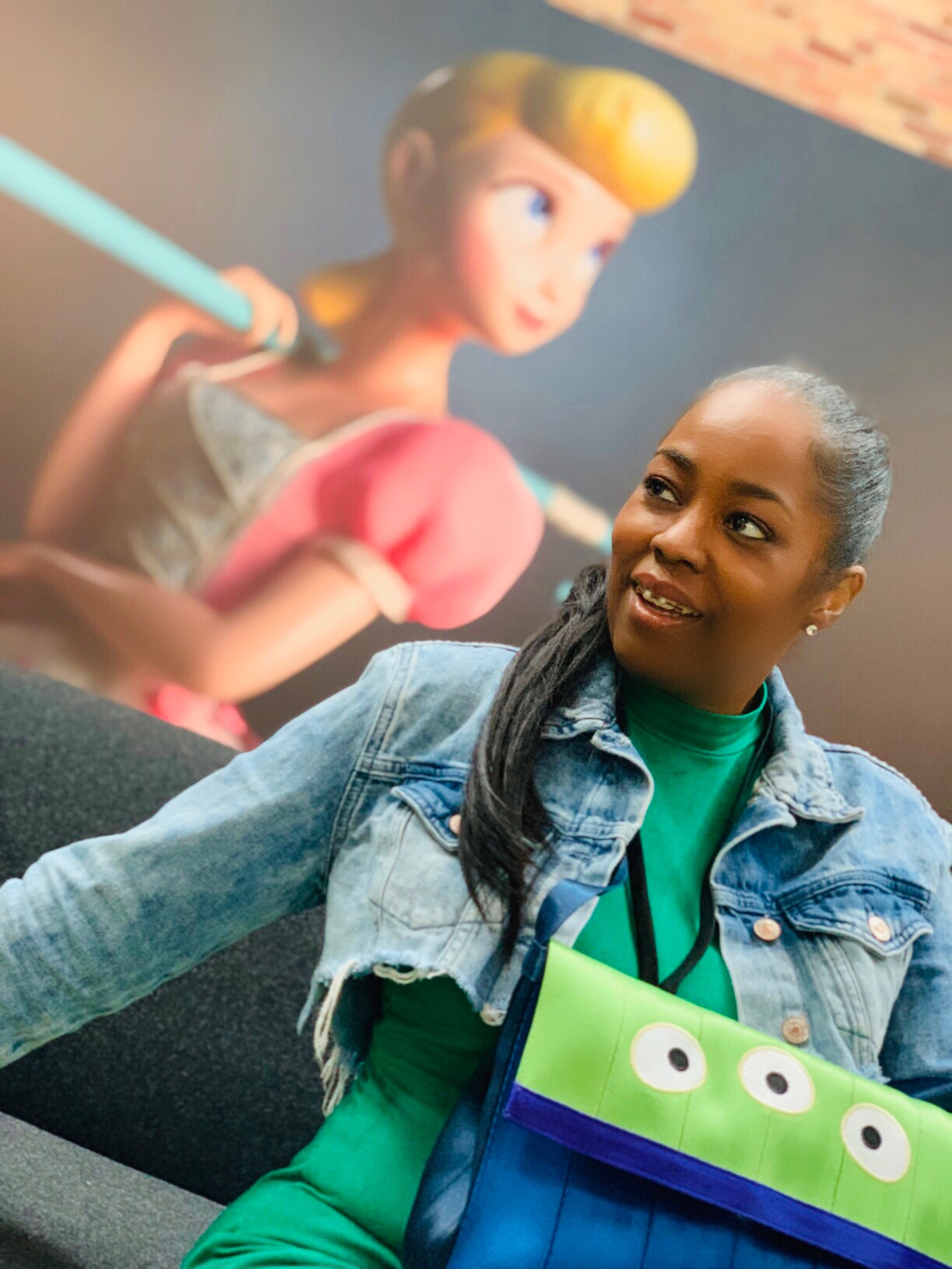 Hey guys about a month ago, I had the pleasure of flying out to San Francisco, Ca for the very first time to visit Pixar Studios with Disney! I learned so much while there and it was really cool to sit and listen to the making of one of the characters in the iconic movie, Toy Story…Bo Peep! I learned how her character came about and so much more! Check it all out inside and don’t forget that Toy Story 4 returns to theaters on June 21st and advanced tickets are now on sale! 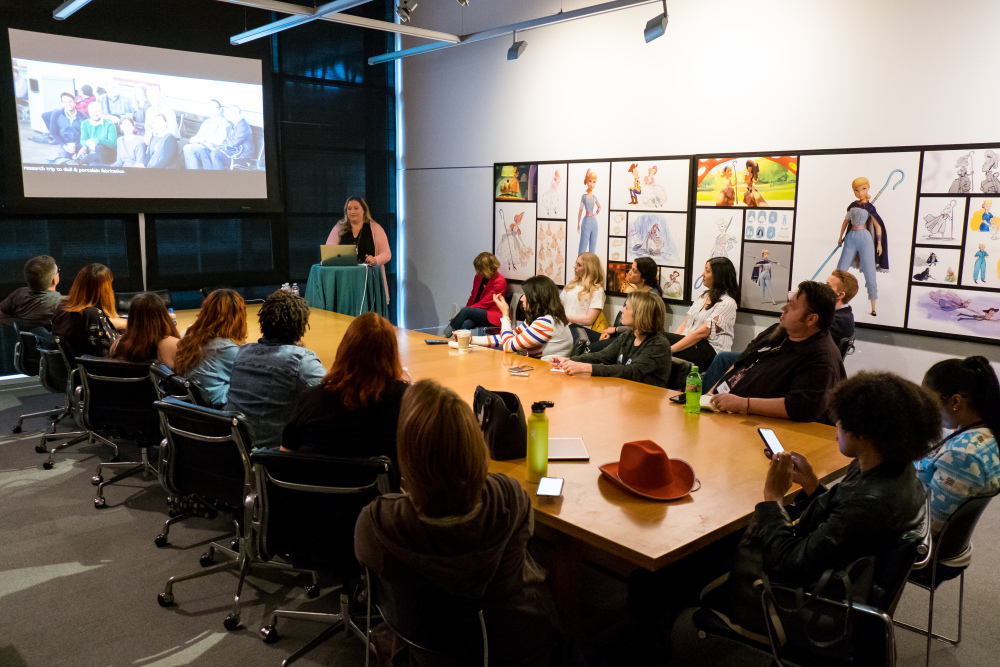 Learning about the making of Bo Peep! 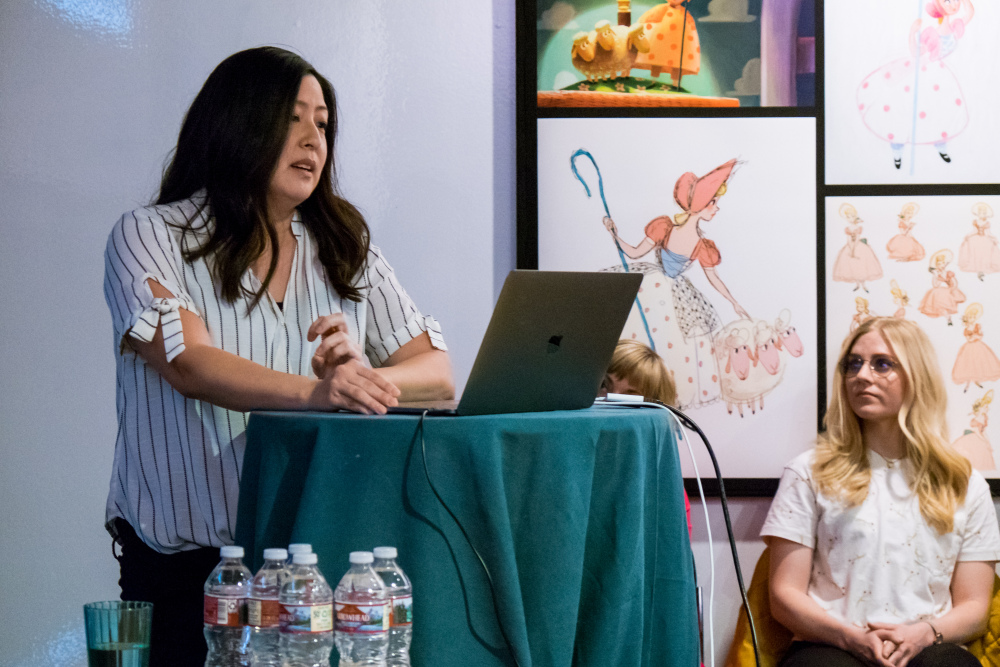 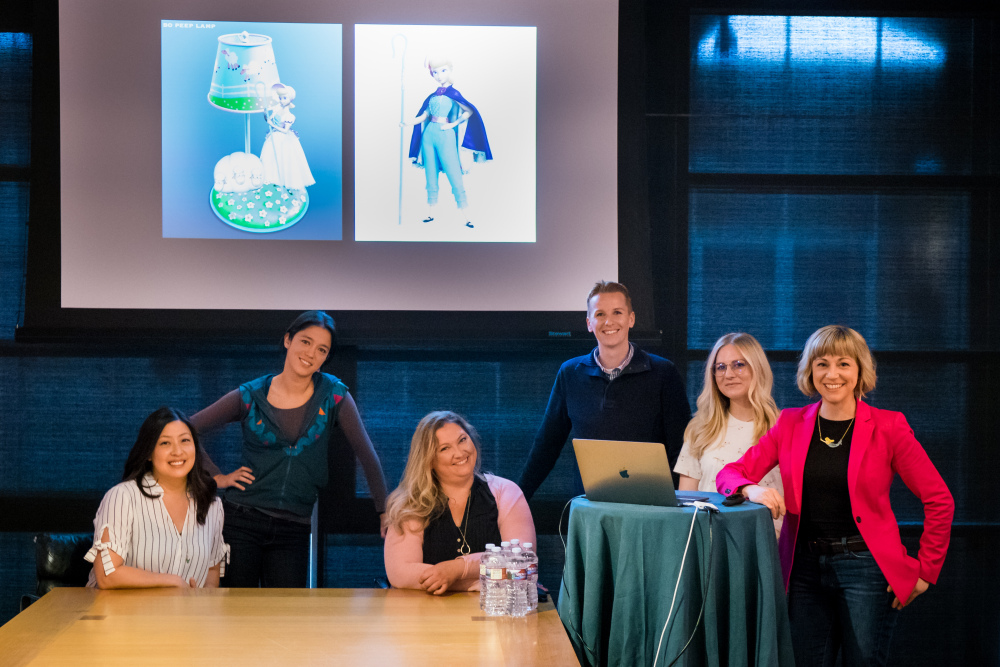 The animators started with what they knew of the character, life as part of a lamp, her personality and expanded role as a driving force for the change in Woody’s character in Toy Story 4.

The animators then began to imagine what occurred during her time away from the Toy Story gang.

How crazy does her life get? How terrible could it have gotten?

Ultimately, the animators decided the focus would be that Bo would become a lost toy.

She became someone, as Cooley says, “who can stand up for herself, has confidence, and has seen a lot of things, has lived through it. She’s more well-rounded. We looked at different kinds of female characters. [Mad Max: Fury Road’s Imperator] Furiosa. Rey from Star Wars. Marion from Indiana Jones is a huge one as well, especially because they have that relationship in Raiders. Also, Ilsa from Casablanca. ”

“She’s gotten all wise and courageous,” says an obviously proud Potts. “She is a fierce warrior.”

One of the challenges animators faced was how to portray Bo as athletic while still feminine? They found that strong athletic women were often portrayed as masculine in movies and the team wanted Bo to be both.

“She is poised. She is purposeful. She is graceful AND strong.” adds, Directing Animator, Becki Tower.

The following women inspired the animators as reference:

Giggle McDimples is a miniature plastic doll from the 1980s Giggle McDimplestoy line. Giggle is Bo Peep’s best friend. Small enough to perch on Bo’s shoulder, Giggle is Bo’s confidant, supporter and advisor. “Giggle is Bo’s Jiminy Cricket — we’re able to get insight on Bo through their relationship together,” says Cooley. “Giggle is definitely the smallest toy in the Toy Story universe. She’s been stepped on, vacuumed up, and probably put up a kid’s nose in her time.” 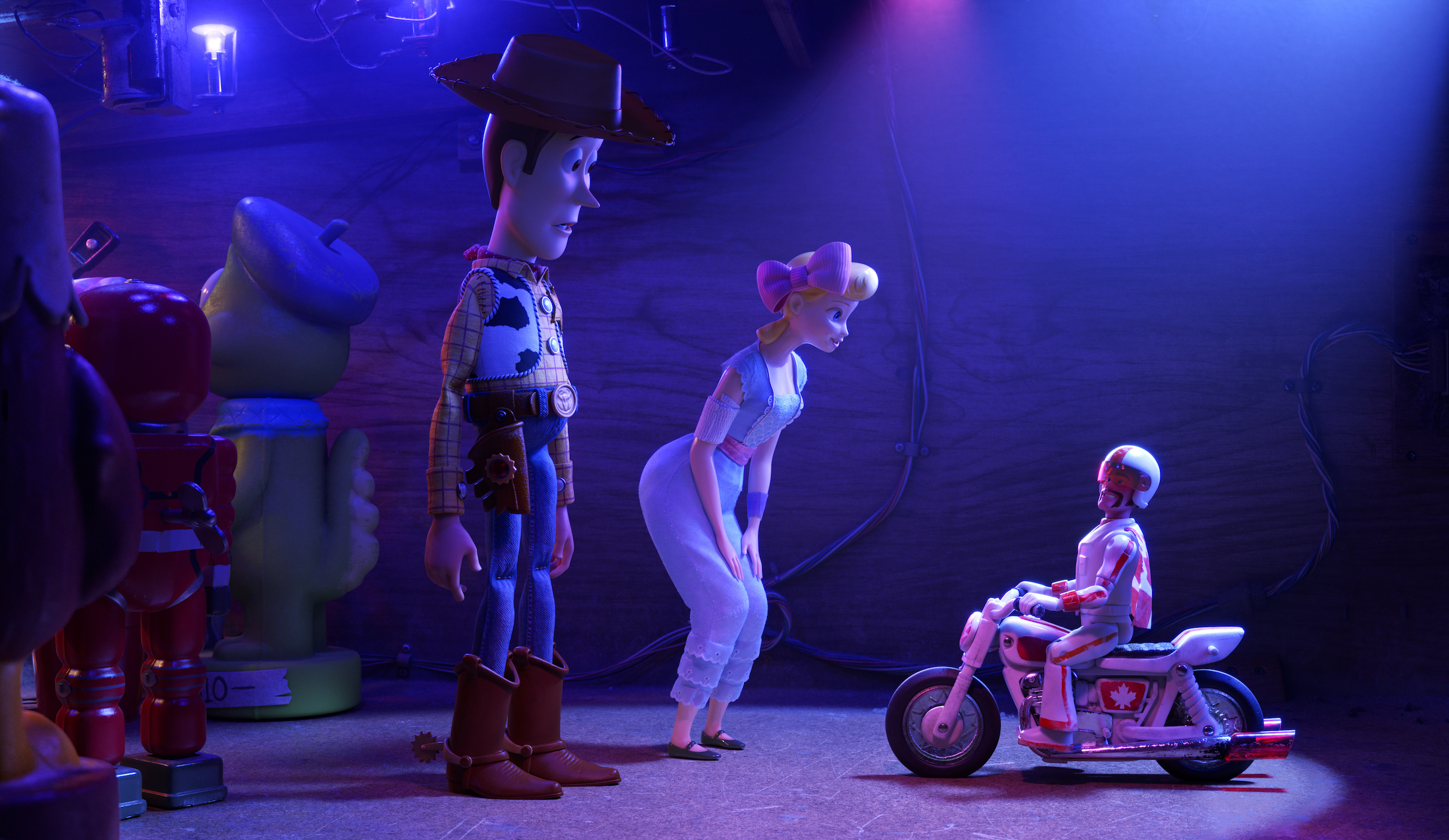 She’s no longer a porcelain doll! After being separated for years,

BO PEEP is a long-lost friend of Woody, Buzz and the gang, who always shared a special connection with Woody while residing with her sheep on a lamp base at Andy’s house. “There is definitely love between them,” says Nielsen. “We see in the prologue just how hard it was for Woody to let her go.”

After being separated for years, Bo has become chipped and discarded, but her spirit is far from broken. She has grown into an adventure-seeking free spirit whose strength and sarcasm belie her delicate porcelain exterior. When she and Woody are reunited under unlikely circumstances, Bo realizes just how much she’s missed him, and can’t wait to show him what she’s been up to. “Bo’s taken control of her own destiny,” says Cooley. “While Woody was watching Andy grow up, Bo gathered dust until she took it upon herself to head out into the world. And when Woody shows up, they can’t believe that they’ve found each other again.”

According to screenwriter Stephany Folsom, Bo and Woody first connected as leaders of their respective rooms. “Woody ran Andy’s room, overseeing the toys there, and Bo was in charge in Molly’s room,” says Folsom. “There’s a certain responsibility that comes with running a room, and it’s clear that Bo is strong and in control.”

Annie Potts returns as the voice of Bo. “Annie not only brings emotion to Bo, she completely fleshes out that character,” says Cooley. “She’s heartwarming and funny, and Annie has a natural sarcasm that’s just perfect.

“We had a few sessions when Annie and Tom recorded together,” continues Cooley. “They’ve known each other for such a long time, there’s a natural chemistry between them that made it so easy.”

Producer, Mark Nielsen adds, “There is definitely love between them. We see in the prologue just how hard it was for Woody to let her go.” 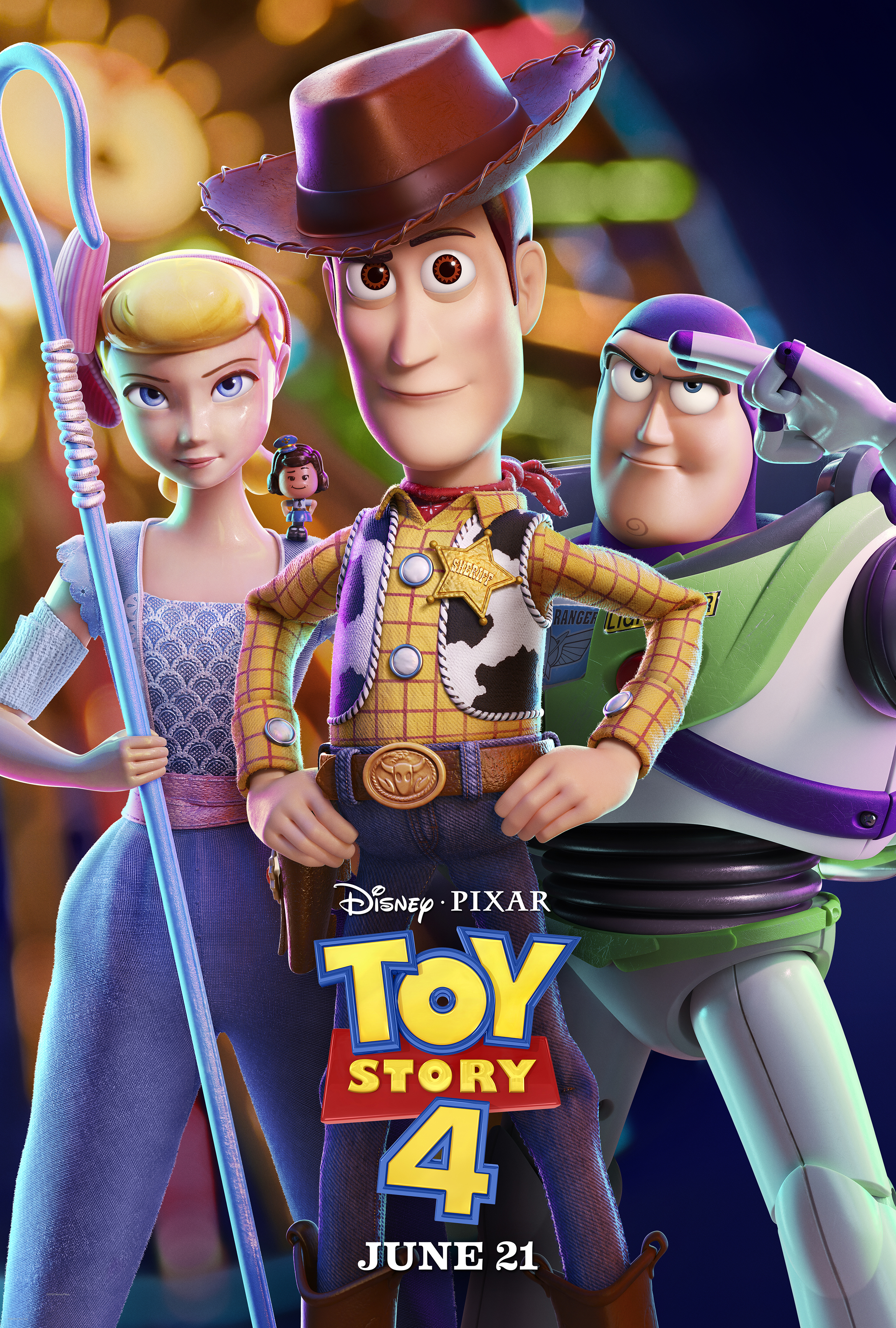