Say it aint so! After 7 long years, Reality Diva NeNe Leakes says goodbye to her spot on the most-watched reality show, The Real Housewives of Atlanta! I’m not happy to see my girl go but I know she wouldn’t have stepped away from such a lucrative job unless there was something else brewing and it is!

After Leakes announced her departure, a spokesperson for Bravo released a statement saying that the network still supports Leakes and her career.

TWT TEA: I just don’t know what the show will be like since NeNe Leakes will be gone! I don’t know if the other ladies can keep my attention span sigh! To be honest the others are a bit BORING with the exception of Kenya Moore. Leakes is said to have a new tv show coming very soon, good for her! I wonder if it’s on E!’s Fashion Police…hmm? A few more ladies will not be returning to Atlanta Housewives either like background character Demetria McKinney and also Claudia Jordan is rumored to be out as well! I got this from a VERY reliable source close to Claudia’s camp that the rumors are true, she is not returning either. Also, a bit of more tea I heard while out in Los Angeles was that tv producer (Atlanta Housewives) Carlos King was let go by the network too…Bloop!

Cohen also jumped on Twitter and shared his thoughts on Ms.Leakes departure… 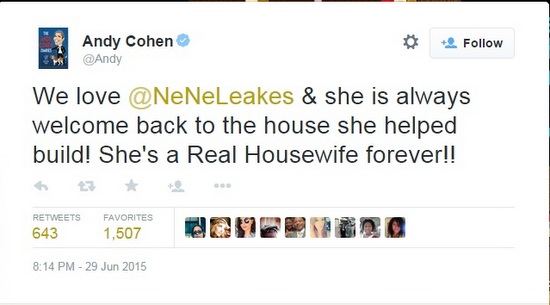 5 thoughts on “TWT TEA: NeNe Leakes Sashays Away From ‘The Real Housewives Of Atlanta’”