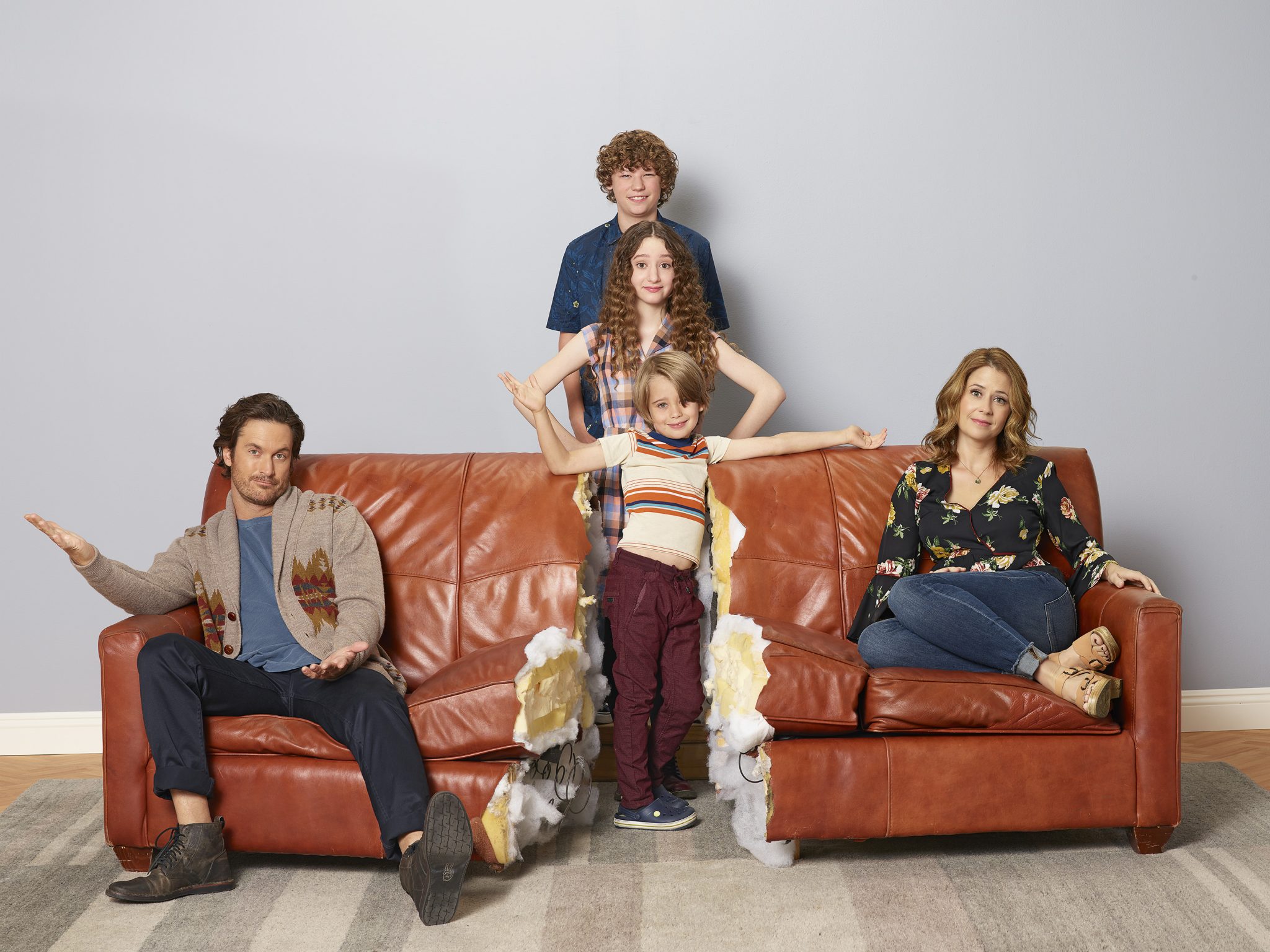 While out in Los Angeles a few months ago on my press trip to A Wrinkle In Time, we also got the opportunity to visit the ABC lot and have a chat with some of the actors and producers from a few new tv shows that will be coming to your tv screens very soon. One of the shows that I really took a liking to was called, “Splitting Up Together”. It stars Oliver Hudson who plays “Martin”, Lindsay Price who plays “Camille” and also we talked to Executive Producer and Showrunner Emily Kapnek and Dean Holland.

We got to see the first episode that airs tonight on ABC at 9:30pm est. You are in for a treat if you love family comedies. Its refreshing with a spin on divorce and how it doesn’t have to be that bad when you break up. Inside, the actors talk to us about the concept of the show, working together, the cute kids on the show, a video clip and so much more! 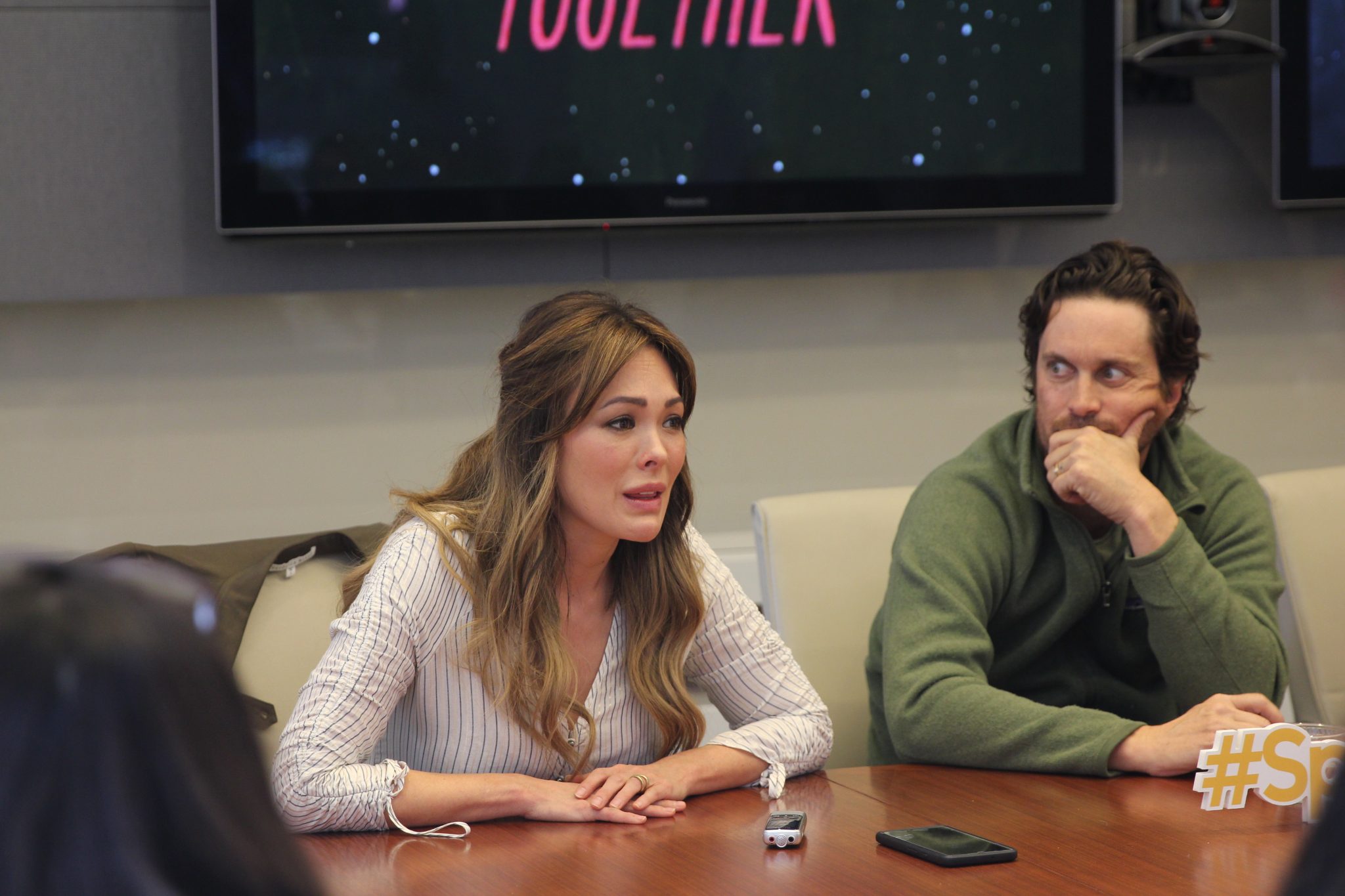 How do you think this show will portray divorce in real life?

Emily:  How do we think it will portray it in real life? I mean I think we felt like a lotta people seem to identify with the world and the characters whether they were going through a divorce or not. We just kind of drew from all of our own real-life experiences. We’re all kind of married with kids. Everyone here is. So, we’ve, we’ve had lots of stories to share. And I think the main goal is just to tell a story about divorce that isn’t, you know, toxic and negative that has a little bit of hope and a little bit of optimism.

And there’s some that wish for — for me personally, you know, having grown up with parents who are divorced, I think everyone always hopes, oh, my gosh is there any chance in the world that they can get it back on track. And I think a lotta kids feel that way. And to tell a show where there is that sort of glimmer

that’s being dangled and a lot of love between the main characters was just sort of a new way of telling a divorce story for us, yeah.

Dean: Historically it’s always been kinda negative that divorce is such a bad thing. And while we were shooting it, numerous people came up to us and told us we’re doing this. My friends are doing this. So many people were kind of — it’s like, hey, it’s — let’s kind of both still raise our kids and somehow manage to make it work.

Emily: Yeah, I know a lotta couples that have good relationships, even if they didn’t reconcile just good relationships with their exes and they’re co-parenting happily, and I just don’t think you see a lot of that represented. Right?

Oliver: Yeah, I could say that of myself. I’m a product of divorce still hoping for my parents to get back together. 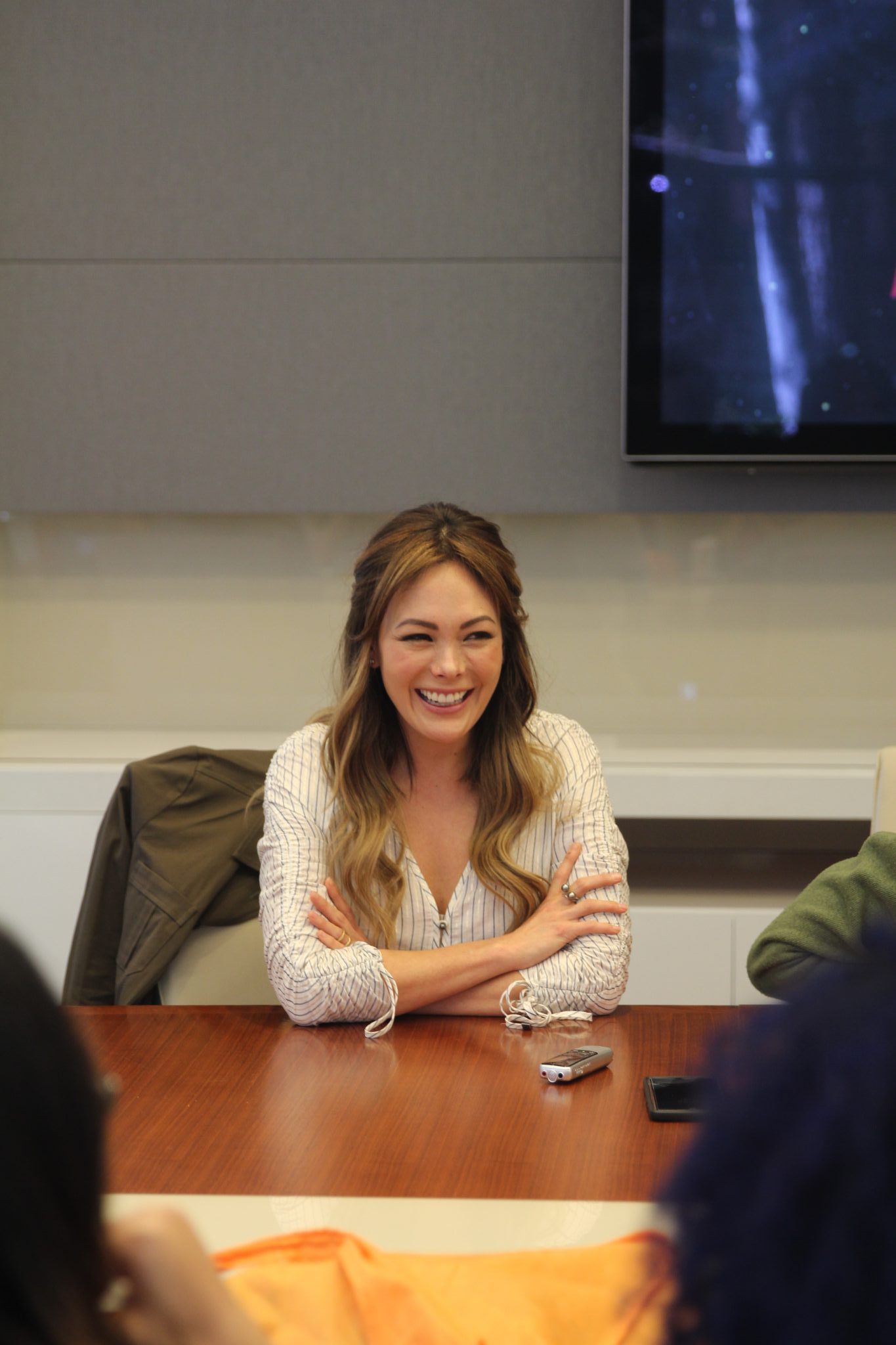 What was it like working with the kids, ’cause it seemed like you guys have a good relationship?

Oliver: It was great. It was honestly great. The kids were amazing. The bigger ones were professional and it was they were just spot on. Sander, who is an amazing little actor, he’s a kid.

He’s seven. So, I had to parent 24 hours a day, because I was on set working with the kids and I sorta took to him and I became, you know.

Emily: And I think one of the things that is so great about Oliver in the show is that Oliver has three kids in his real life. And watching him deal with these kids, it’s so authentic. Do you know how I kept saying over and over again, it’s like you can tell he’s dad. You can tell how he deals with these kids, how he delivers the kids, and also just not the — you know, no kid-glove thing where he’s like — sometimes he says stuff that’s really harsh to the kids. You know, there’s a couple episodes in where he gives it to them pretty bluntly, and it just feels really authentic. So, we love his performance.

How has the show impacted your own personal relationships?

Emily: My husband has definitely threatened to sue. He’s like that’s so you should’ve had me sign that (Joking). 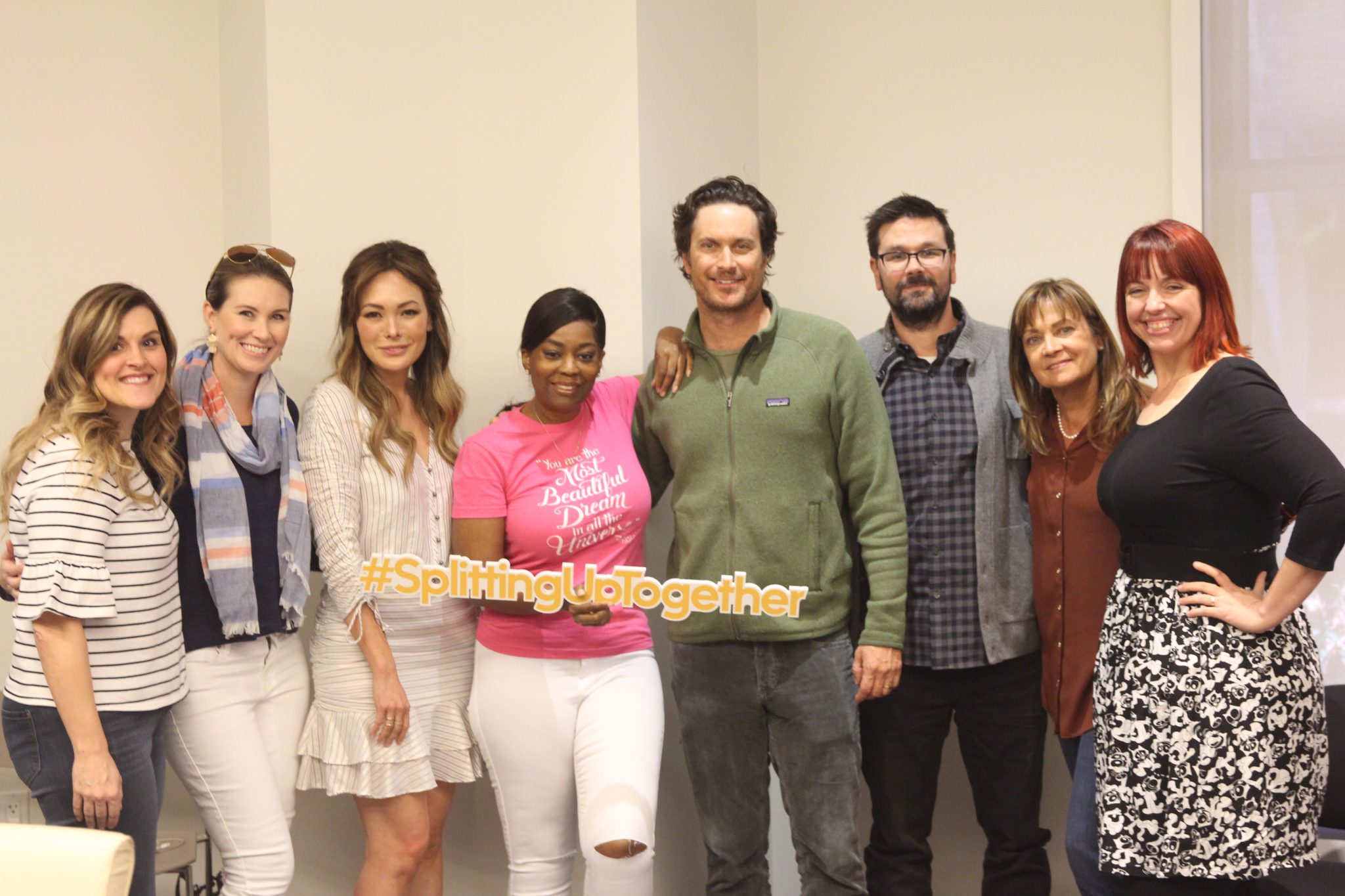 With Jenna Fischer, Oliver Hudson and Dean Holland Splitting Up Together premiering tonight on ABC at 9:30/8:30C 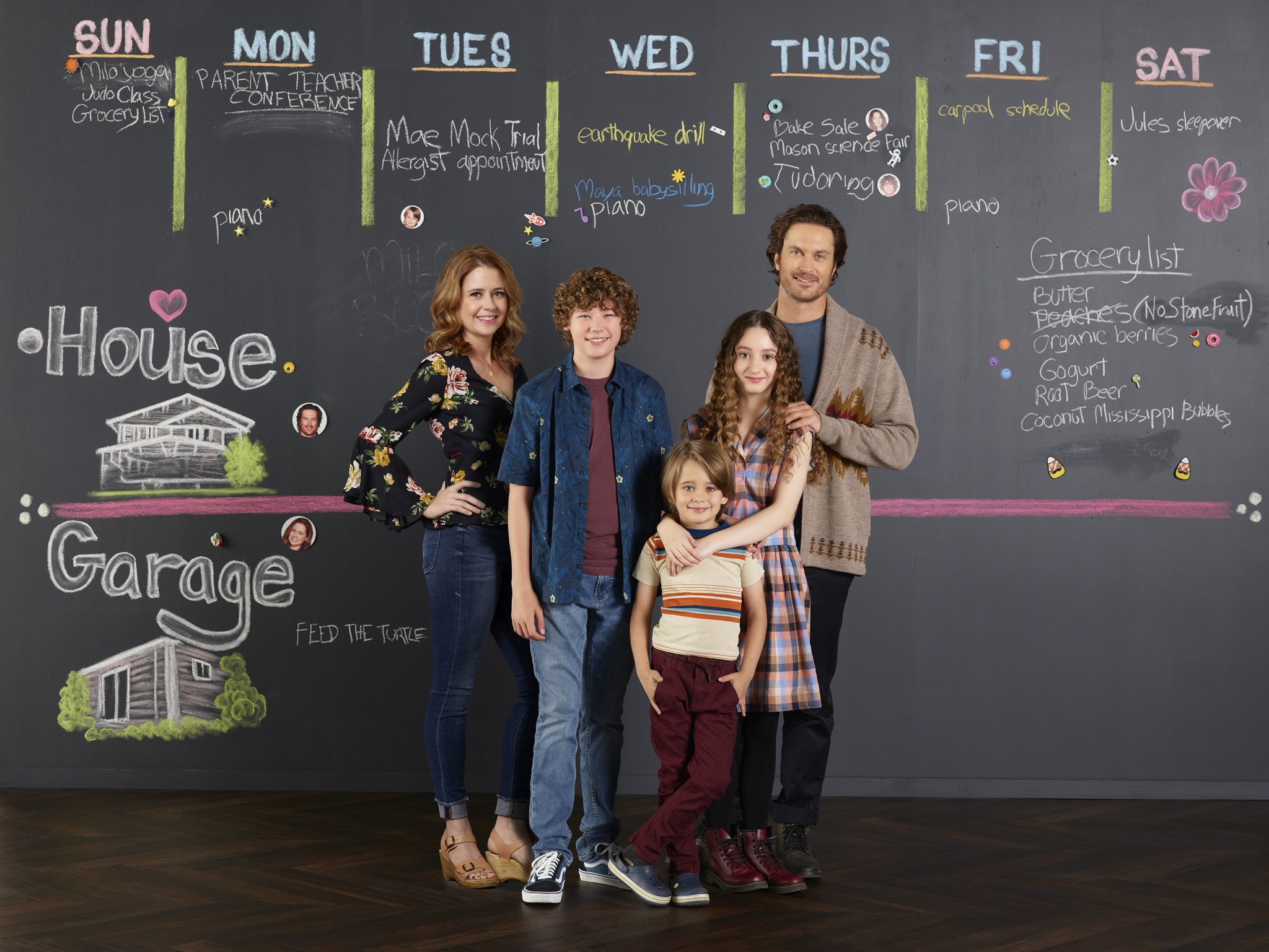 Synopsis: Ellen DeGeneres serves as executive producer of this comedy that is based on a Danish series of the same name. Lena and Martin were certain enough that their marriage was over to make it official and go through the complicated untangling involved in filing for divorce. The last thing that they expected was to be brought back together by the experience, but they find their relationship strangely reignited by the experience. Together, they navigate their evolving relationship with open minds and newly reopened hearts.