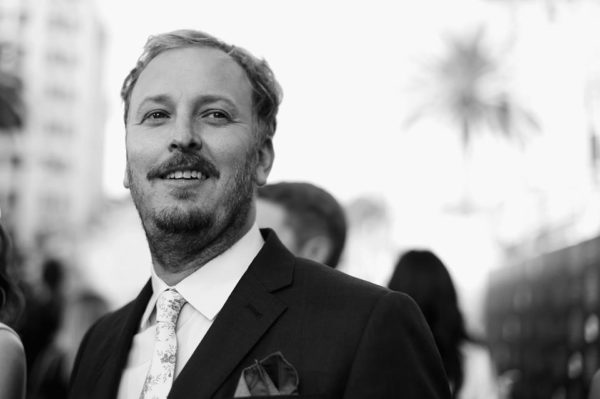 Its really cool when you get to be amongst the Hollywood’s elite and one person in particular that I had a great time getting to meet was Film Director James Bobin! He was the Director for the movie Disney Alice Through The Looking Glass. He took a few minutes to sit down with us to discuss the film, what it meant to him, directing so many A-list actors and more! Check out what he had to say inside… 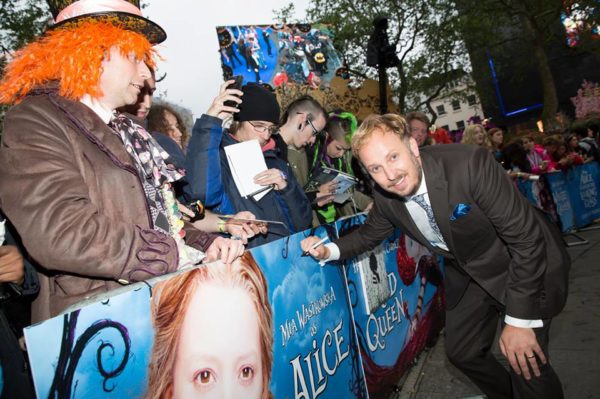 What Alice means to him:

I was working for Disney already and I made some Muppets movies for them back in the day. I remember being on set she (Kristin Burr) mentioned the word Alice to me and of course I jumped at that because I grew up in England and Alice is like part of your life. She’s just someone who you know really well. She’s like Christopher Robin. She’s just part of your makeup. I read it as a kid. My grandparents read it to me. Everyone has it. And so for me, I did the same with my children. I have in my kid’s playroom, we have a poster from the British library. We love Alice in our family. 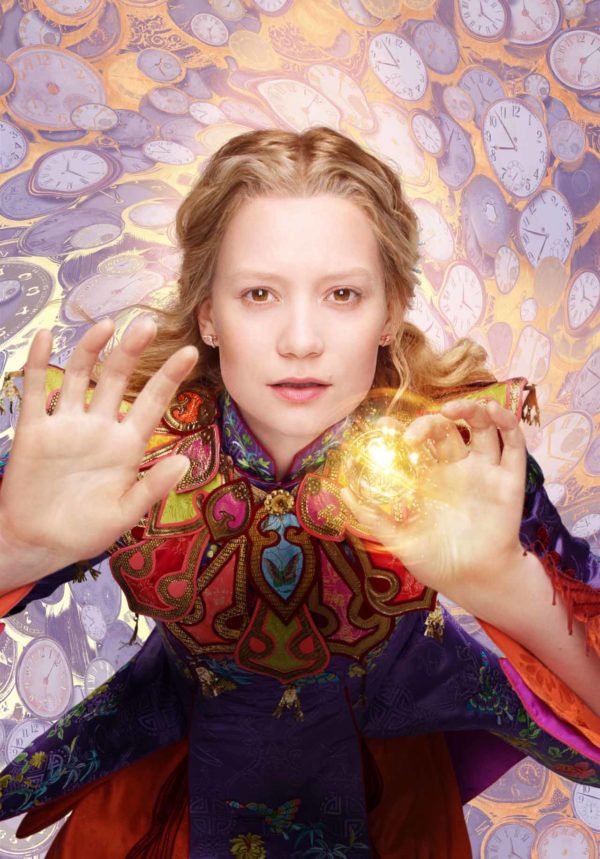 So when I found out we were doing it I was really excited. You think you have a clear idea of who she’s gonna be in the film and who I felt Alice was to me growing up but also because I keep saying when I read Lewis Carroll as a kid he used to make me laugh. He has a very witty way of writing and he’s very clever with language. So it felt like a very natural thing to do but I thought if I came on that I could kind of bring some of that British comedy back a bit, which is hopefully what you guys saw when you watched the movie. So it’s a bit different. I mean, it needed to be different. I think sequels need to be different.

It’s nice to pay tribute and make sure you respect the origins of the story and the characters. But people want to see generally something which is a progression or something new or if it has a different sight, feel or tone.
You’ll notice that in the design it’s a bit different too. The palettes are a little bit brighter. In the movie, the story itself is very much about the human relations and the family. The world is more Victorian in some ways and that’s partly because when I was a kid growing up the books are illustrated so beautifully, that to me was where the world where Alice lived. 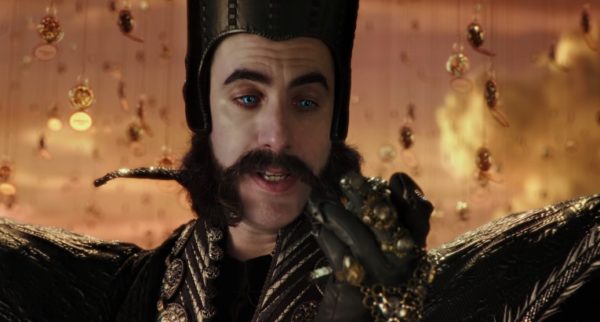 I knew that if you’re going to create a new character for this world particularly whereby you have iconic characters like the Mad Hatter and Alice and the Red Queen we needed to create a character, which is Time. Time of course is Lewis Carroll’s idea. It’s not my idea. I only borrowed it from him. Lewis Carroll talks about Time as a person in the book Alice in Wonderland. Hatter says, you know, when he very first meets Alice at the tea party, he’s kinda stuck and he says to her I’ve been stuck here since last month where Time and I quarreled. I thought that is a brilliant idea for a character. In Wonderland Lewis Carroll thinks Time is not just an idea but a man, a person, so that would be a very useful character to have in this film. It felt very right for the movie to have a new character and that it would be Lewis Carroll’s idea.

What he was gonna be is more of a kind of obstacle, like a powerful obstacle to Alice’s situation. Plus I thought that if you’re gonna do a time travel movie it’d be nice and very British to have to ask permission to having free Time. It’s a very English way of doing time travel. I felt that would be a very nice way of starting the character, therefore when you have a powerful character what’s quite fun is if you undermine them immediately by making it pretty obvious that he’s a fool and Sacha’s very good at playing the sort of over confident idiot. And that was a very good character for him.

Sweeney Todd was very much inspiration for us. Like when I watched that movie I loved his character in that and obviously he plays with Johnny. So that feels like that world fit into this one neatly. If you’re gonna work with Helena and Johnny as he has many times he kinda fits into that– into the universe already. So that was a good start because to raise your performance to match the levels of Johnny Depp and Helena Bonham Carter is not easy to do.

I knew he had it in him. It was just a question of kind of working out what that guy was gonna be like then we started talking about the character like we did with Borat and Bruno. Sacha could do pretty much anything and we thought that Time as a concept is a kind of Swiss idea, like clockmakers etc. and in Switzerland there are two languages, there’s French and German. And we thought German was quite precise in its language.

Time is a very important character in this movie and he has great moments of kind of wisdom in the movie when he says to her, you cannot change the past, but maybe you can learn from it. That’s a very profound thing for him to say and it’s a very nice thing for everyone to learn generally because it’s true. You can’t change the past. 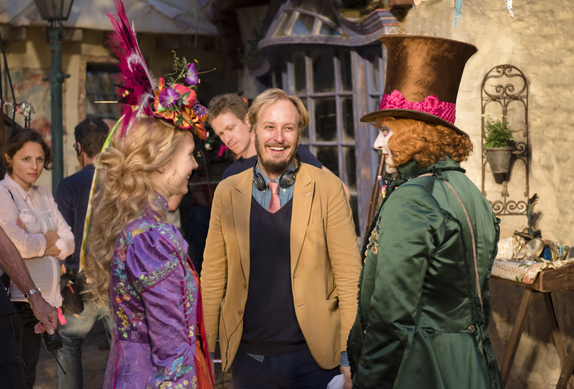 The story is challenging because it’s not the story of the book, which I knew it would never be because I loved the book very dearly. But even as a kid I realized that it’s quite unusual because Lewis Carroll wasn’t that concerned with narrative. He liked imagery, ideas and the book kind of falls in on itself deliberately. Things happen. And then other things happen. And they seem very consequential. It’s only cause and effect, so I knew that for a film would make an interesting avante guarde movie. I’m not sure I could do that in this situation so I knew the story would be a new story.

I knew Linda had an idea about the time travel movie based on the characters from before but at the same time I wanted to pay tribute to the book. The book’s incredibly important and Lewis Carroll is very important to me. I wanted to take elements of the book like the backwards room and obviously the looking glass and the characters and the spirit of Lewis Carroll, the idea of something which is fairly complex but not so complex that my eight year old daughter wouldn’t understand it. It’s important you understand the story. 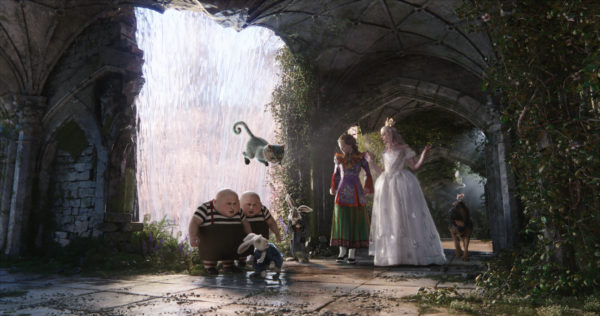 Using modern technology in the movie:

“Obviously, what’s happened is, as with everything in the world, computing power, raw computer power is a lot of the answer of this question because they drive the models and the various ways we build animation and graphics. But what it end, the end result is that you can see these people and in the animated characters particularly in a very clear way. Like if you look at the Cheshire Cat you can now see his individual hair on his fur, which is beautiful, and see it moving. And the thing I’m particularly impressed with these days is eyes because eyes are, as you know, the windows to the soul.

So it’s very important how light plays with the eyes. I think over the past six months or so I’ve first started to see eyes that feel real and lifelike because they refract the light in a really beautiful way and they have depth. Obviously your eye you have the lid, and then you have the cornea and that stuff is the pretty part of your eye but you see that. In movies you haven’t really been able to see that up until now. So in the past six months to a year we have really started really seeing eyes that feel totally real and it’s not far from being photo real.

You really do start to see photo real people and that’s the next level when you find the human face and that is the hardest thing to do of all. In this film we never really had them because you have characters, which are creatures, which is kind of doable. But a real human face is going be the ultimate challenge for CG. When that actually works then there’s a whole new world available to me.” 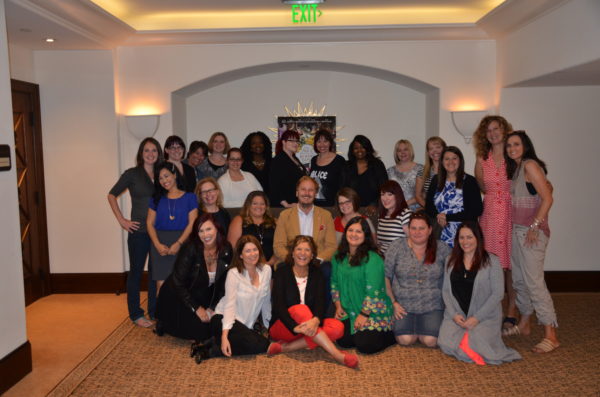 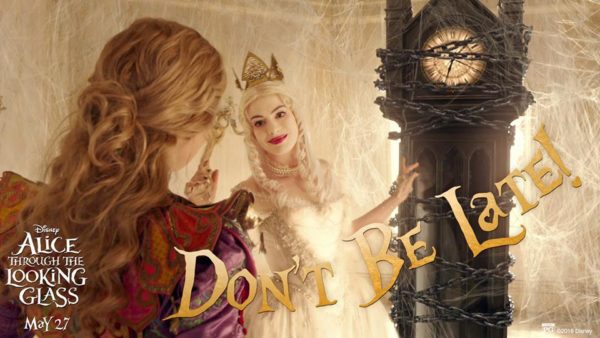 Alice Through The Looking Glass in theaters now!