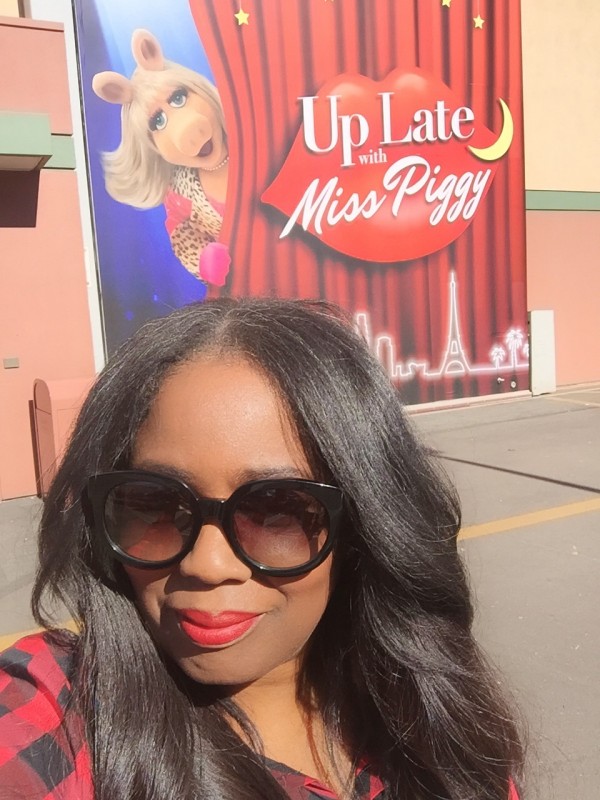 Hey guys, are any of you fans of The Muppets? I used to love watching this show when I was younger and I especially liked the two grumpy dudes Statler & Waldorf that would sit up in the balcony and heckle lol. They would be considered “haters” in today’s world, ha! They never had anything good to say but they were my favorites on the show besides Miss Piggy, who I found to be very glamorous.

I always loved Miss Piggy’s style of dress, fur stoles, jewelry and big eyelashes lol. To my surprise when we were out in Los Angeles on our press trip with Disney, we got a chance to visit the set of The Muppets and chat with Executive Producers Randall Einhorn and Bill Barretta. It was pretty cool and I learned a few fun facts about the show that I wanted to share with you. Check out what they had to say about working with puppets, casting for the show, producing the late night talk show and so much more! 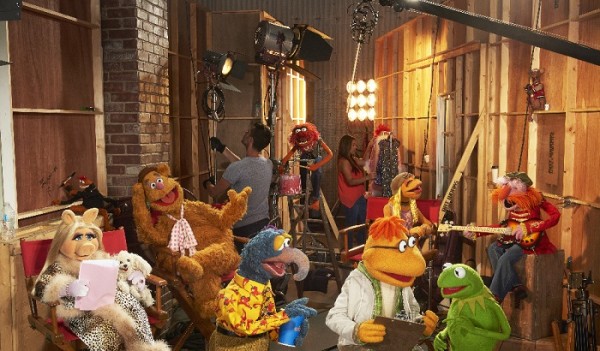 Working With Puppets:
Working with with puppets has its complications, especially when they make up most of your cast. Bill Barretta explains.”Well there’s different types of puppets. Kermit for example, is a puppet that you can almost see if you really look. You can almost see the knuckles of Steve Whitmire’s hand and they create those facial manipulations. He’s a very malleable Puppet.

He also has arm rods that go into his wrists so he’s what we call a Rod Puppet. A character like Fozzie, is usually operated by two people. It’s one person that’s doing the head and the behavior and the body of the character and another doing the arms. It’s a whole — whole collaboration between puppeteers. Different characters operate in different ways.”

Filming logistics have to also be taking into consideration when planning scenes because some of the puppets are done by same puppeteer. For example Miss Piggy and Fozzie are performed by the same individual. Bill Barretta explains how they work around this. To get really get great performances from both that feel authentic and true to those characters, Randall needs to take into consideration the time and how to shoot this so that Eric (the puppeteer) can start with Miss Piggy while we have somebody standing in for Foz. Then we come around and we shoot the other side and have Eric get out of Miss Piggy and go into Fozzie. It’s a bit of a dance scene to make that happen. 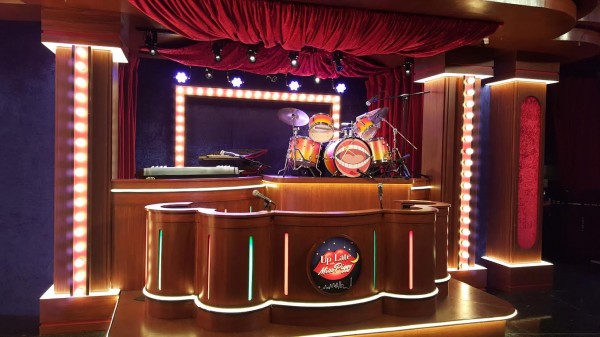 Filming and Prepping the Average Episode:
It takes on average 5 days to prep an episode of The Muppets, and then 6 for shooting. Days can be four 10 hour days and two twelve hour days or two 14 hour days depending on if the show in in studio or on location. Even small actions for simple things take large amounts of time since many monitors are needed for puppeteers to see their movements and sections of floor have to be removed for the puppets to stand comparable to their human costars.
“We use television monitors so that we can see what the camera sees,” explains Bill Barretta. “That’s the only way that we’ve able to see the characters is to see what the camera sees. So the monitors are placed in very specific places, depending on what the action is in the scene and what we’re doing. So that’s a whole other level of logistics and where we are and how we find the space to do this.”
The amount of preparation for a scene is enormous. For an average episode with 28 scenes, it can take as many as 2 hours per shot or 56 hours of not shooting and prep work just to get everything ready.

Having the Characters Evolve:
Bill Barretta explains, “Gonzo is not the same guy he was 30 years ago. He’s evolved and I think that’s because we as performers and people evolve and our relationships. The relationships between the Muppets are really, come from the relationships beneath the puppets. We’re always finding new things and new ways of dealing with each other, and we don’t get along either.” 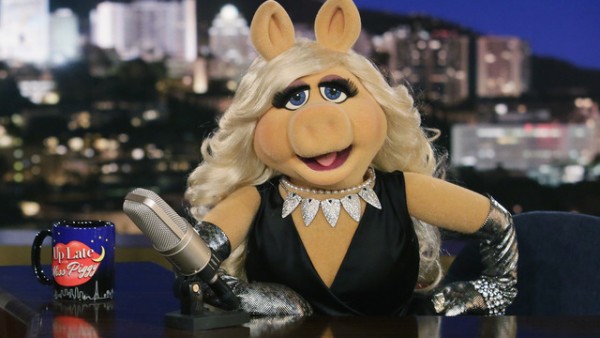 Why a Late Night Talk Show?
When asked why the Muppets have moved on to a late night talk show, Executive Producer Randall Einhorn answered. “I suppose it could have been any number of Shows but I think a talk show places them in the real world where Piggy plays a celebrity, kind of like Ellen. It gave Piggy a place to be a diva, to make everything about her and the show is all about her. The rest of the Muppets have all banded together and have a somewhat normal life with a real job, a mortgage, banking to do, that type of thing.” 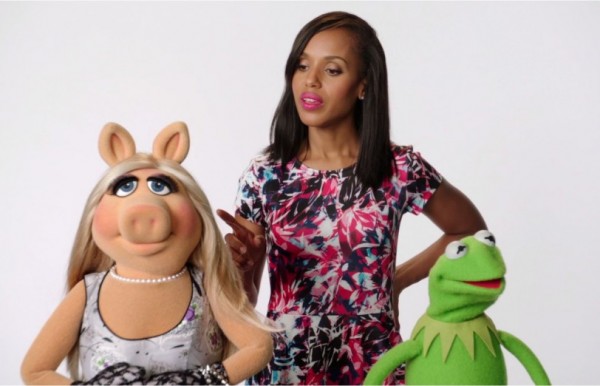 Casting Guest Stars:
When asked about guest stars, the executive producers revealed casting those has been pretty easy so far. There has been lots of calling and texting of friends. So many stars love The Muppets, it hasn’t been a challenge. You’ll see Joseph Gordon Levitt and Mindy Kaling on upcoming episodes just to name a few of the many stars who will be joining The Muppets gang. 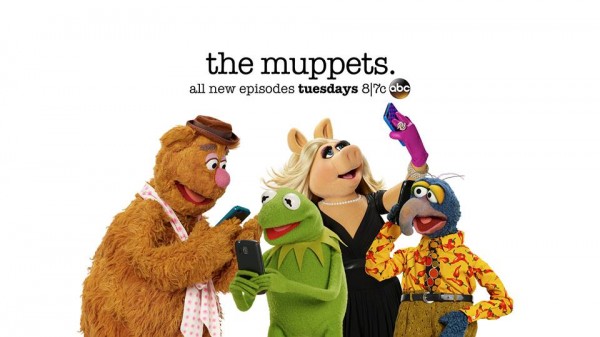 Tune in tonight at 8pm est on ABC 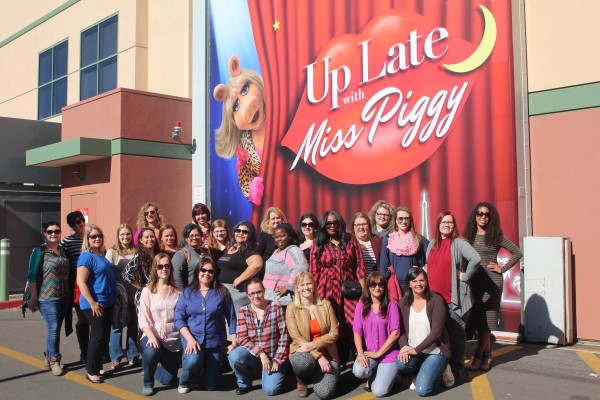 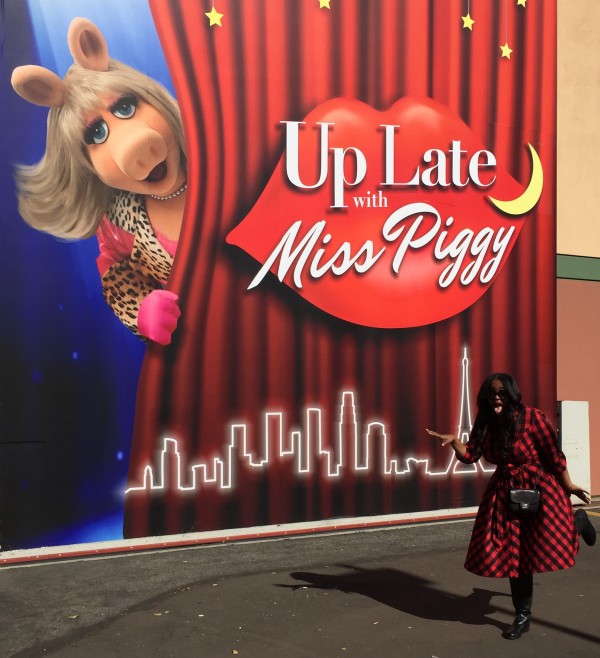