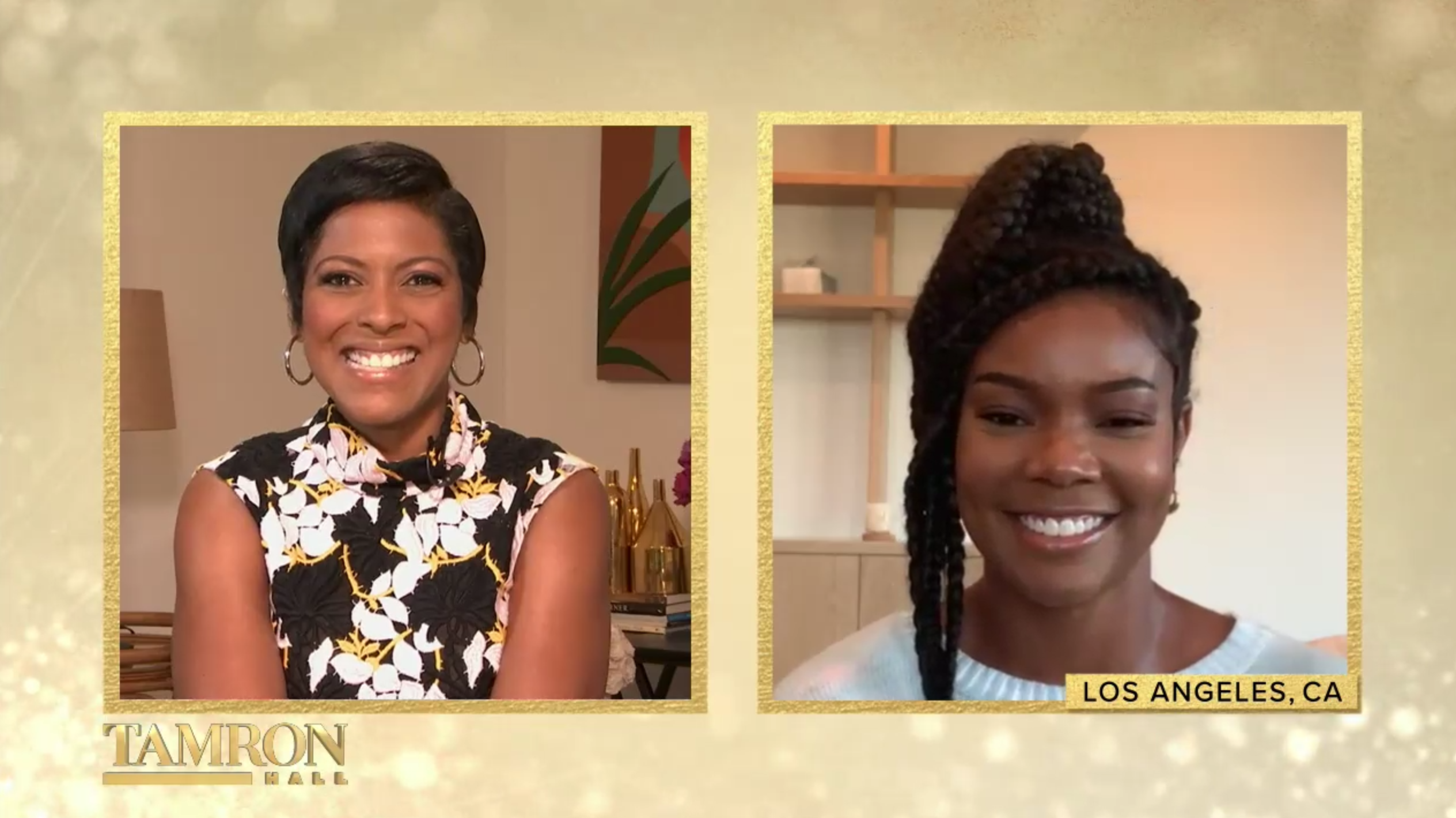 On the Thursday May 28th edition of “Tamron Hall,” actress Gabrielle Union joins the show to discuss her new children’s book, Welcome to the Party, and season two of her hit TV show, “L.A.’s Finest.”  Union also reacted to criticism she faced following a photo she posted of her daughter Kaavia, her husband’s new quarantine look and how the two are supporting the LGBTQ+ community. Tamron also sits down with Libby and Victor Boyce who lost their son, Disney star, Cameron Boyce almost a year ago to an epileptic seizure.

When Tamron asked Gabrielle Union if it was her idea for her husband, former NBA star Dwyane Wade, to debut a new, red hairstyle Union responded, “No, no. I’m super conservative for the most part when it comes to color. It scares me. But not my husband. D — I don’t know if he saw ‘The Last Dance’ and saw Rodman and was like ‘he gets me,’ cause the next thing I know it was like blonde and then it was kinda like pinkish and then it went red. And then Zaya was like ‘Yes! You get me.’ And Zaya has pink hair and they are just happy as clams and I’m like it’s just hair. It’s quarantine. If not now then when?”

On criticism she faced after posting a skin to skin moment following the birth of her daughter Kaavia via surrogate Union shared, “Sometimes you’re faced with that moment of, do I educate with my words or do I go for the jugular?” She continued, “I have to make those decisions every day and some days are better than others. But in that case, you have to help people understand that this isn’t just my journey. That skin to skin is an option — and all the benefits of skin to skin. Whether you have given birth and you want to do skin to skin, whether you have used a gestational carrier the way we did — a surrogate — you’ve adopted, that skin to skin can be a part of your journey if you want it to be. Giving people that information. For me, there’s no point of me having gone through so many things where I felt so painfully alone and misunderstood, if at the end of that I’m not going to share and offer community, understanding and some visibility. And that’s just basic. That’s the least you can do.”

On the praise she and her husband have received after their very public acceptance of Wade’s 12-year-old transgender daughter Zaya, Union responded, “It still feels uncomfortable getting any kind of recognition for loving your child and accepting your child exactly as they are. What we are really also clear on is that for a lot of people, perhaps they actually need to see what it looks like for a family to show that  love and show that acceptance and not let outside noise dictate how you love and embrace your children. It is never an option to consider your children as disposable and for too many young people, and older ones, in the LGBTQ+ community, a lot of their families, employers, feel like they are disposable.” She continued, “We are showing you, this is what love and support looks like while we take the time to educate ourselves so we know how to best provide resources and community and better love and accept not only our child, but the whole community. It’s not hard to love your child. It’s not hard to unlearn problematic behavior.”

Tamron was later joined by Libby and Victor Boyce who shared details of their last moments with their late son, actor Cameron Boyce. The grief-stricken parents are hoping to honor the legacy of their son through The Cameron Boyce Foundation, established to reduce gun violence and cure epilepsy. Tamron began the emotional interview by acknowledging that it would have been Cameron’s 21st birthday to which his mother Libby responded, “It’s a double edged sword. Obviously. It’s his birthday and he would have been 21 and it’s extremely devastating and it’s extremely painful. But we also want to be blessed with his memories and do all we can to do the work he was doing here on earth. He was very much a philanthropist and he was very convicted in what he was doing — very much focused on helping the world be a better place. He’s left little seeds and those seeds were carried forward.  Obviously he wasn’t involved in the epilepsy community but that’s something that we feel very strongly [about] because that’s what took his life, is something that we need to talk about and we feel like the medical community’s sort of keeping it in the corner and we want to bring it out of the corner.”

On their last night with Cameron, Victor Boyce shared, “It was a totally normal night. Actually it was a little abnormal because we had an earthquake that night. While we’re at dinner, on the patio there was an earthquake. We rolled that out together and it was an interesting family experience. The dinner was great. I don’t know if you know but Cameron had just purchased a home and so after dinner we drove him to his house. We said goodnight, said ‘I love you son’ and when he opened the door — he had two roommates — and he said ‘Daddy’s home!’ and he strolled into his house and that was the last time I saw him alive, and it was just — it’s still surreal to me that it’s how it went down. And again, thinking about his memory as a blessing. That was a beautiful night and I’m glad that I was with him that night.” He continued, “It’s not cliche to say you never know when your time is up and that’s a brutal example of that.”

On whether the last film he ever worked on, Runt, will be released, Libby responded, “We’re not sure at this point. It was just in The Mammoth Film Festival and it won some awards there but then COVID hit and the entertainment business I think is sort of somewhat at a standstill. We just really don’t know at this point. I can’t imagine that it wouldn’t be released. And we certainly hope it will be released. It was something that he was very passionate about because it was an Indie film and something he was really interested in doing and also something completely different than what he had done because Cameron was really a very, very talented actor and he did the funny guy and the sitcom guy and he was really good at that — he had great comic timing, but he hadn’t done a really serious role so he took it extremely seriously and his performance is pretty amazing in it.”