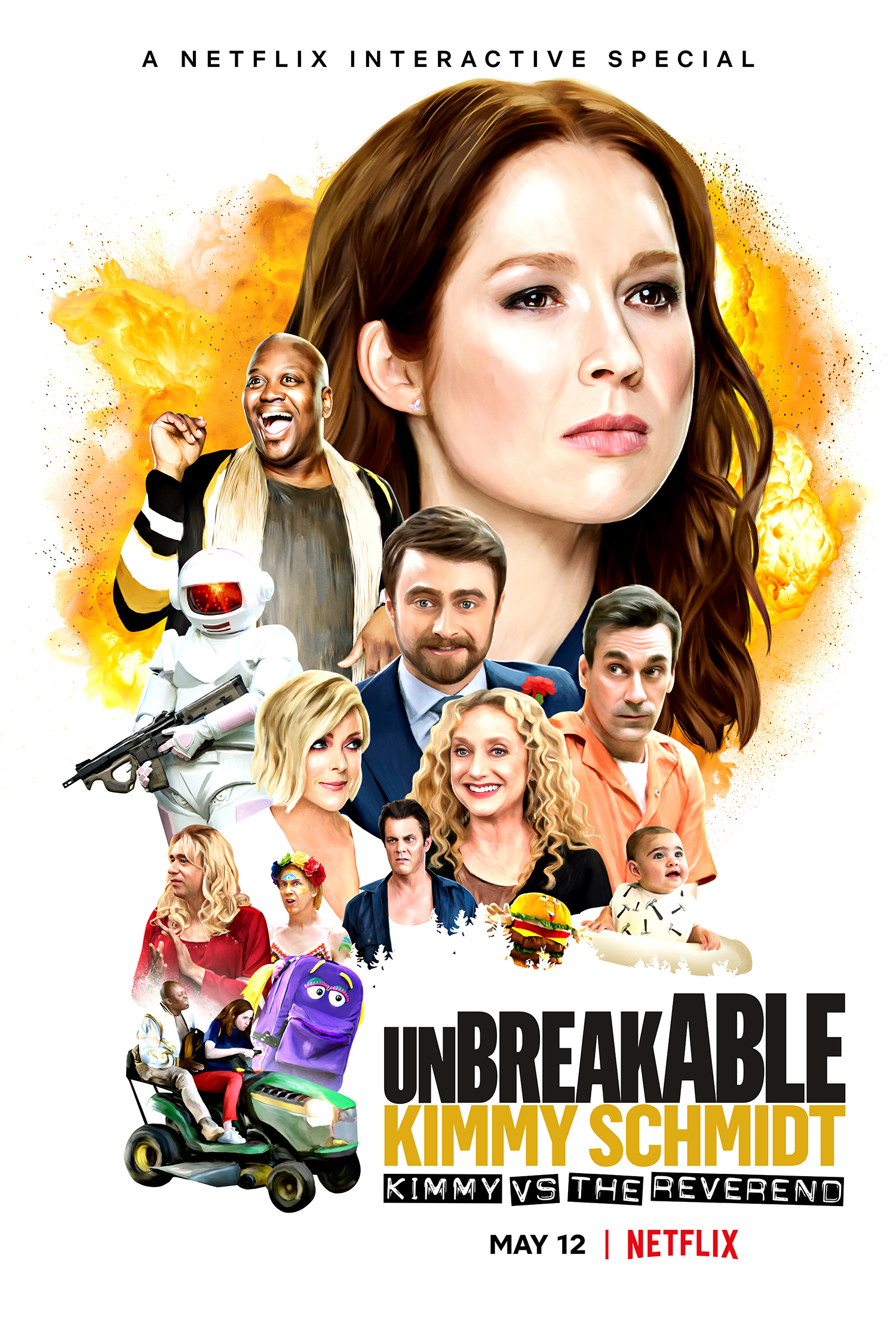 Kimmy Schmidt (Ellie Kemper) sets off on her biggest adventure yet. Three states! Explosions! A dancing hamburger! And you, the viewer, get to decide how the story goes. Will you foil the Reverend’s (Jon Hamm) evil plan and get Kimmy to her wedding on time? Or will you accidentally start a war against the robots? So grab your remote and a tray of delicious scrod, ‘cause Kimmy’s got her own Netflix interactive special! Netflix’s Interactive Special Premieres May 12. Check out the trailer inside…

As filming of the Emmy-nominated series was coming to an end in 2018, the cast and crew were preparing their farewells, both to their characters and to each other. Executive producer and writer Robert Carlock recalls, “We were finishing up the series and I think that with any good series there are hopefully still stories you want to tell and so we floated that notion to Netflix. We wondered if there was an opportunity for a conventional movie-length special and they came back to us with this! To get to be the first comedy to use this technology was really exciting. We thought it would be fun to tell some stories we hadn’t told and maybe wrap up certain loose ends we hadn’t fully explored. The idea of being able to go down avenues and tell stories in this entirely different way was incredibly exciting.”

Executive producer and writer Tina Fey adds, “We immediately felt like it would be a real match for our universe, and particularly the tone of the comedy that we do with ​Kimmy Schmidt because it’s this densely joke populated and sometimes absurdist comedy. We thought it would be a really nice fit. We were also really excited because as a crew, we were sad to be wrapping up the series. It was nice to know that there would be this one final hurrah, this nice button on the series, and that we would be able to work together again.”

Netflix’s Director of Product Innovation Carla Engelbrecht says that after the success of B​ and er snatch​, the content team were really passionate about starting to experiment with other genres, and comedy was their first instinct. “Tina and Robert immediately came to mind, because they were continually pushing boundaries with the ​Unbreakable Kimmy Schmidt series,” she says. “They are phenomenal, amazing storytellers and we knew that with this set of tools, they were going to not only take our interactive storytelling to new heights, but they were also going to push comedy to places it’s never been before. To end a series with an interactive special is unprecedented and it’s going to create an opportunity for viewers to come into Kimmy’s world.”