Hey guys how are you today! Not too many people can say that they actually met Cinderella but I did a few weeks ago and I wanted to share with you my interview with actress Lily James! She was such a delight and might I add very pretty and personable in person. In our one on one interview with Lily out in Hollywood, California we chatted about the dress, the iconic glass slippers, how she prepared for the role and so much more. Check it all out inside! xoxo 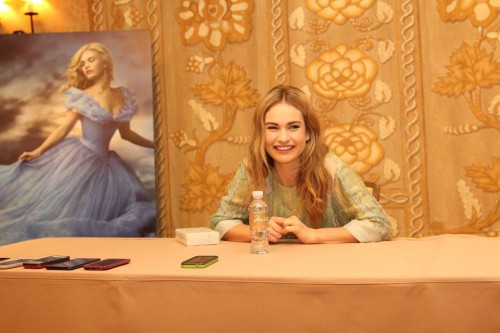 (My Question)What designer shoes were you wearing at the premiere?

Lily: I was wearing Louboutins. I loved that they looked so beautiful and princess-y and then they had the killer red sole, it was great. 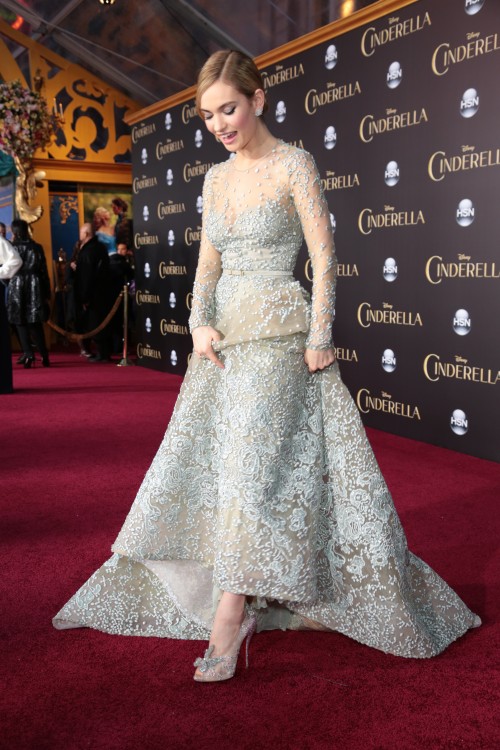 On the dress, the blue ball gown, and what it was like when she first put it on for the first time.

Lily: The dress is insane. When I first put it on, there’s a scene from Runaway Bride with Julia Roberts where she puts this dress on and she looks in the mirror and, I think Richard Gere is looking really handsome somewhere, and she just goes like ‘swoosh, swoosh.’ She makes this sound, and I put it on and I felt like Julia Roberts, it was just the best feeling ever. I was so nervous about this bit of the movie because it’s the bit where she’s the princess. It’s the moment, you know, and I think, ‘How can anyone live up to that?’

Really, it’s this fairy tale, it’s this sort of thing that’s very far removed from me. And then I put on that gown and I just felt transformed, and it felt like a suit of honor. It was really hard to wear, and it was incredibly tight, and it had a life of it’s own basically.

It was crazy heavy, and it pulled down on my waist, and it took about 20 minutes to get in and 20 minutes to get out. It was kind of cool, because it was almost like a ritual every morning. I’d have my dress, we’d start from the very bottom and slowly, it would take a bit of time, we’d have some music on. The only thing was if I needed to toilet. You’re always so rushed when you’re filming, so it would be like a 40-minute break, so the crew would be like, ‘God, where’s Lily?’

Helena and I had same problem, so in the end, we had these port-a-loos that we’d put under us. And it was the most unglamorous thing ever. So Helena and I would sometimes be in our tent and be next door and be both using the port-a-loos at the same time.

On the Wedding Dress

Lily: I wanted [Sandy Powell] to do me a dress for the premiere last night. I was like, ‘Sandy.’ [LAUGHS] She’s amazing. I feel so sad that it was only in the film for like 30 seconds. I was like, ‘Ken, you’ve gotta shoot it from the back, you’ve gotta shoot it from the back.’ Because the flowers were hand painted, and you know the detail that goes into these dresses!

That veil, and the crown, and actually we did the hair how Cinderella in the animation wears it at the ball, so that was a kind of like little echo. I was doing a photo shoot in it one day when we were so busy, and I rushed in and we did the photos. At Pinewood Studios, it’s England and it’s cold and it’s miserable and gray. And I rushed in, I was so cold and I was walking past this heater and my skirt caught on fire. And I didn’t care about myself I was like, ‘the skirt!!’ It was all hand-painted flowers, and they had to redo, like a whole section of the skirt.

What about those glass slippers?

Lily: They were really made out of Swarovski crystals, so, even more amazing. They’re so beautiful but, sadly—I hate saying this—they don’t fit any human foot. I’m glad it’s no foot, just not my foot. If it was just my foot it didn’t fit, I’d feel really un-Cinderella-y. So the prince is still looking for his princess.

On preparing for the role of Cinderella

Lily: I started horse riding lessons because I’d never ridden before. I had to bare back as well, so every second I wasn’t filming Downton [Abbey], I was at this farm learning to ride. Then I did yoga to sort of try and feel in my body and graceful and breathe properly.

Then I was just working on the script on back story. When I met with Ken, he was like, ‘I want to know, does Ella sleep with the blinds open or closed, what does she dream about, what’s her favorite food.’ He wanted for me to know all those details so that I could sort of just exist on set being her. 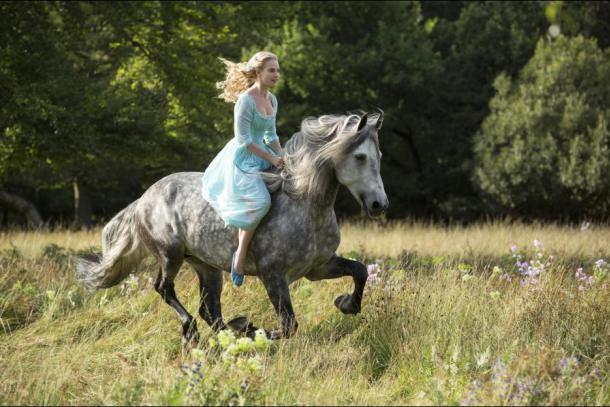 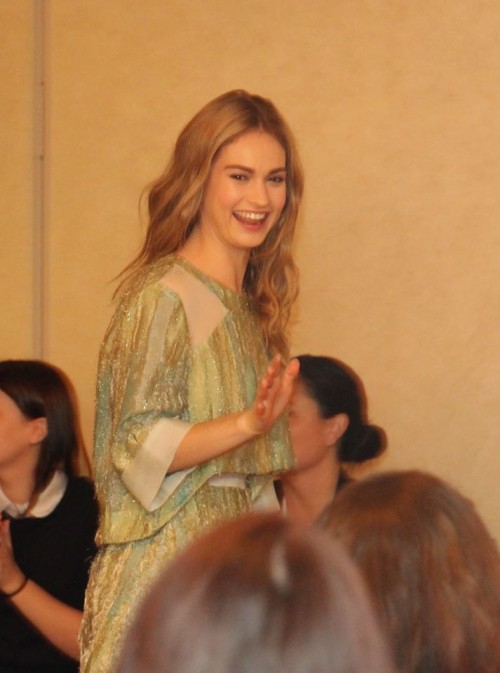 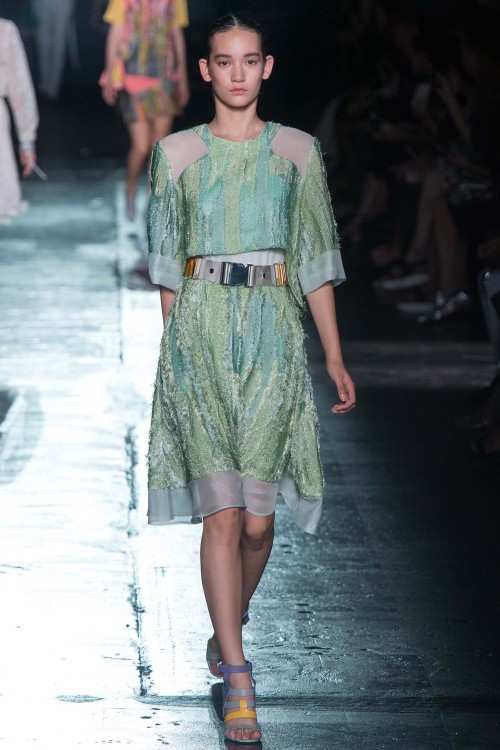 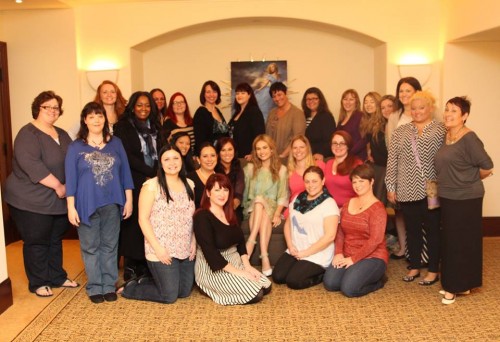 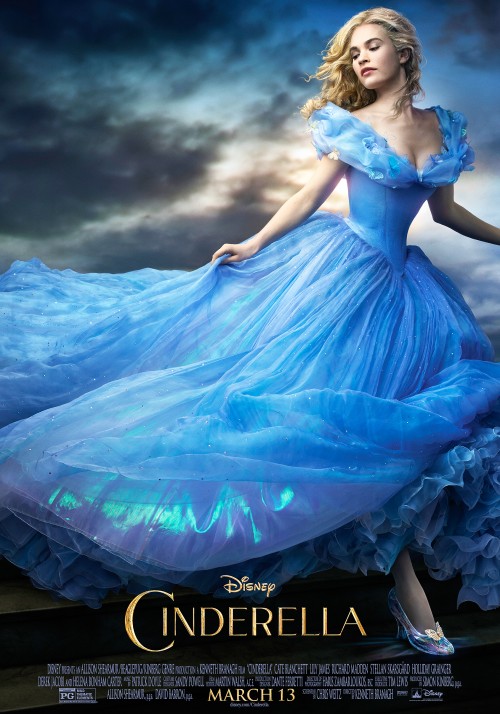 One thought on “One On One: Actress Lily James #CinderellaEvent”