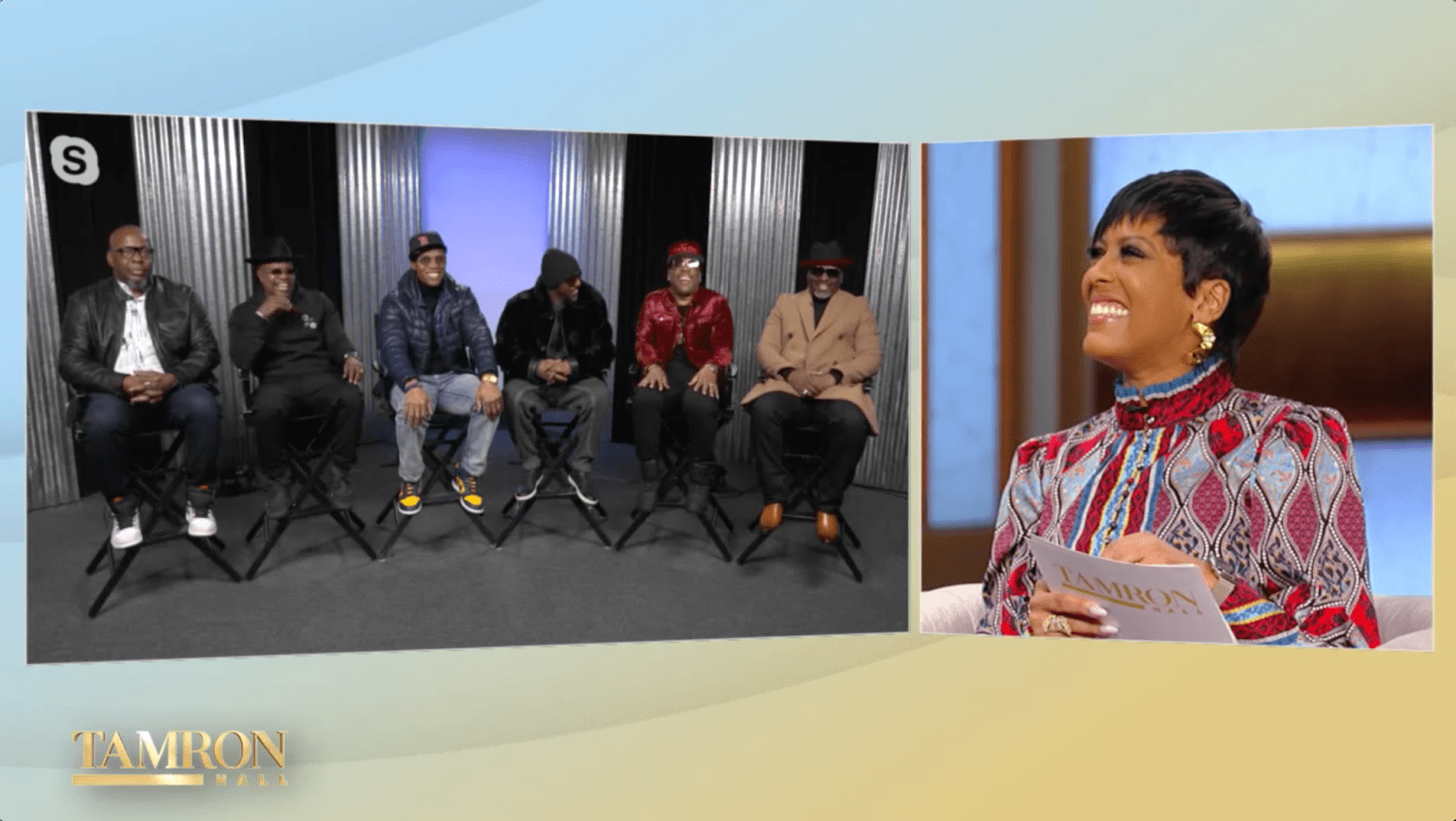 Iconic R&B group New Edition sits down with Emmy-winning host Tamron Hall for a special hour-long interview on her daily daytime talk show “Tamron Hall” airing Tuesday, February 15 (nationally syndicated, check local listings, www.tamronhallshow.com). The in-depth conversation with all six members, Ricky Bell, Michael Bivins, Bobby Brown, Ronnie DeVoe, Johnny Gill and Ralph Tresvant, will focus on their incredible careers spanning decades, from the inception of the original New Edition group back in Boston, to their solo careers to their comeback as New Edition once again. Tamron digs deep with the group as they get candid discussing their personal and professional trials and tribulations throughout their careers, including stories they’ve never shared.  They also give fans a special performance and sneak peek behind the scenes as they get ready to launch their 30-city “The Culture Tour”.

Bobby Brown: “It’s been wonderful [having the support of New Edition]. My brothers have stuck by me through so many rough times in my life. I’m proud to call them my brothers and my friends. They’ve lifted me up and they’ve helped me up to heights that I can’t even find the words to explain. But they’ve always been there for me and I appreciate them all.”

Ronnie DeVoe: “Bob is like a giant man. You know, I told him that the measure of a man is in what God allows you to endure to a certain extent. And for me, what my brother has gone through, God knew I wouldn’t be able to manage something like that. So, he walks in giant’s shoes at the end of the day. And I love the fact that he’s still here and able to really overcome a lot of those obstacles and look at it like ‘Look, there is a mission, there is a purpose for my life.’ And one of those things is being right here. You know, with his five other brothers in front of Tamron Hall, in front of all these amazing people watching us getting ready to move across the country.”

New Edition on their humble beginnings in Boston:

Ronnie DeVoe: “We are a reflection, to me, when you look at our faces, like the projects and the places that we come from, we were not supposed to make it out. So when you look at us and you see our faces, people out there that are in those situations know that you can make it out at the end of the day. I just want to say that for sure.

Mike Bivins: “As you can see, we’re an emotional group. When we see each other, it’s subliminal conversation, because he goes through things, he’s going through something now, he goes through things and we go down the line. I go through things and the thing that makes it better is when you can sit down with any one of your brothers and tell them how you feel and he gives you the greatest words of advice and gives you really great love that sometimes even as a man, you just need to know that you’re loved, you are cared for and someone cares about you.”

New Edition shares how they are preparing for their U.S tour:

Bobby Brown: “That is the number one goal, to have everything precise. Every I has to be dotted and every T has to be crossed in order to perform with these guys. I’m just getting back into it. Really trying hard. You might not know but it’s difficult to do the dance steps after you haven’t been doing them for a while. It’s about muscle memory. And I’m trying to get that back slowly.”

Johnny Gill: “I’ll tell you what is going to be really special for the fans – watching Bobby. I was just saying how proud I am of watching him putting in the work and the fans getting the chance to see him [for the first time] in – I don’t know how long it’s been, how many years – to see us as one unit. Like he’s going through the process, learning the steps and putting in the work. The fans are gonna really – I think they’re gonna really enjoy it to see just the level of growth for us all.”

Bell Biv DeVoe discuss breaking out of New Edition to start their trio, and share how Bobby Brown’s rise to stardom made them confident in their own potential success:

Ronnie Devoe: “I think we always knew when Bob really made his way to stardom in front of us on The Heartbreak Tour. Like he was opening up, then it was New Edition headlining but we saw him rise to stardom. For us, we felt like the fruit doesn’t fall too far from the tree. So if  Bob can blast off like that, once we figure out what it is that we want to do, and we knew that it was going to be the offstage persona of New Edition, but how do we make that happen? Those ballads that lose direction help but then when ‘Poison’ came, it was just a whole other situation. I remember hanging out at Ralph’s house, Mike brought the tape. It was a cassette tape at the time. I was hanging out at Ralph’s and they popped the joint in, and when I first heard those snares and that rumbling baseline and those melodies, I knew from day one. And I remember Ralph knew too because he was like, ‘Yo, man I want to get on that joint! I can take the second verse.’”

New Edition reflects on the time they topped Michael Jackson on the Billboard charts:

Ralph Tresvant: “At the time [when New Edition topped Michael Jackson on the Billboard charts] we didn’t know either. We didn’t know what we did. We didn’t know what type of accomplishment the Billboard charts were and all that. We knew that that was a countdown of the music and the best music that’s out right now. So when we heard that we beat Michael, that was just all that meant to us. ‘We beat Michael Jackson. We must be doing good.’ But overall, we didn’t really understand the charts then, we were just little boys getting into the industry, figuring it all out.”