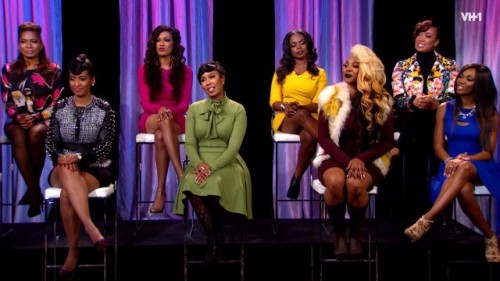 Welp, it seems like the Greeks got a lot of pull because as of this Friday, you will not see another episode of the long suffering reality show Sorority Sisters! It seems as though Vh1 got tired of all the emails, online protesters, petitions and more so they are pulling the show finally! With sponsors running for the hills and pulling out by the dozens and with all the drama and distaste for the reality show, the girls will have to find another source of income! Say it ain’t so! The powers of social media right?

TWT TEA: How badly does VH1 want to put this show into the grave? The final episode will start at the odd time of 11:10 p.m. and end just past midnight this Friday! Plus, it’s not even being repeated later that night for West Coast consumption. And Friday tends to be a relatively low TV consumption night anyway. Well girls your fifteen minutes of fame are up! Castmates April McCrae and Joy Hammond were also suspended for over a year after appearing on the show. Both of these ladies are members of Alpha Kappa Alpha! What an embarrassment! I reached out to April(the cast member I interviewed on the show Episode 2) to ask her for her comment after getting suspended and she told me she will get back to me. Heck this show was doomed from the beginning and I don’t know why they thought they could get away with doing this type of show without any repercussions. They even duped me because when I filmed for this tv project earlier last year, I had no clue it was for Sorority Sisters, they told me it was a “new fashion show” they were coming out with! I got my coins though and I did what I was contracted to do, “interview someone” lol. God don’t like ugly though but I wish the girls well! What do you guys think about the show being canceled? Till next time! xoxo

Update: Its also said that Tv One has also pulled the plug on R&B Divas Atlanta, awh man! Are reality shows a thing of the past? Hmm?